Where did Geoffrey Chaucer get the inspiration for his stories? As part of my research into the hundreds of Chaucer life records in our collections 1, I’ve been taking a look into one of the Canterbury Tales – the Canon’s Yeoman’s Tale – which may have been based on Chaucer’s experience of a real-life trial in the court of the King’s Bench, the records of which are found at The National Archives. 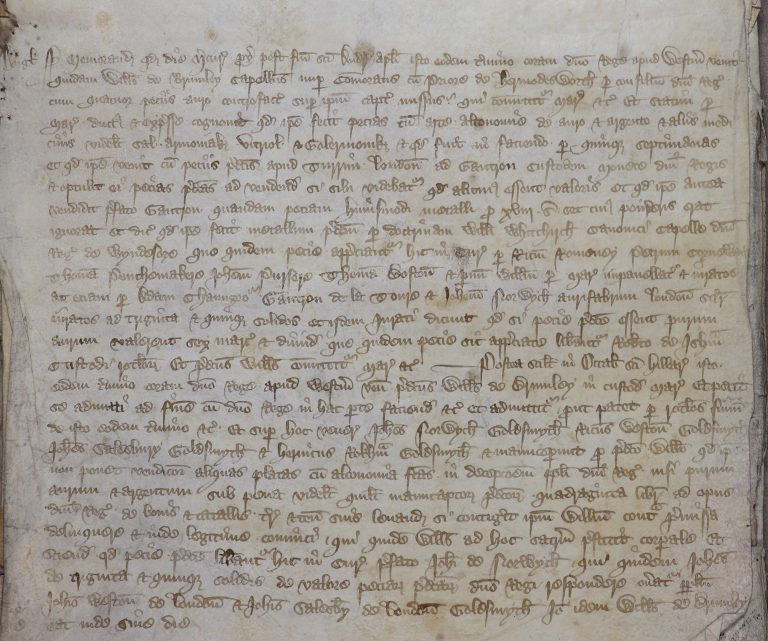 The trial was that of William de Brumley, a chaplain from Middlesex who had been caught red-handed trying to sell four counterfeit coins to the Master of the Royal Mint at the Tower of London; coins made – it was claimed – by means of alchemy. These coins had been made from a combination of gold, silver and other ‘medicines’ (‘sal armoniak’, ‘vitriol’ and ‘golermonik’ – probably meant to read ‘bole armoniak’) by the art of alchemy which William claimed he had been taught according to the doctrine of a canon of the king’s chapel at Windsor.

William had previously been successful in selling his alchemical metal at the Mint, for the price of 18s. At his second attempt, however, after five weeks of work, de Brumley’s attempt at counterfeiting had been unsuccessful, and he was arrested, with his alchemical coins being seized as evidence.

The narrative of the case bears a strong similarity with the Canon’s Yeoman’s Tale – a story of a priest working an elaborate alchemy swindle on his unsuspecting victim for financial gain. In this Canterbury Tale, consisting of a prologue and two parts (the second of which resembles the King’s Bench case), a canon and his yeoman catch up with the pilgrimage party at Boughton under Blee (a few miles from Canterbury), and the yeoman tells his master’s story after the canon has slunk away in shame at his secrets being revealed. The second part of his tale talks of a canon (although not – he says – his master), who convinces a London priest of his skills in changing base metals into gold and silver, conning him into paying £40 to learn his skills, and then disappearing once the priest has paid up, after which his new metals will not pass assay by experienced professionals.

The connection between the two narratives is not entirely new, and was first made by by H G Richardson in 1922 and later noted by J M Manley in 1926, but neither man made any attempt to elucidate solid connections between Chaucer and the individuals involved in the case – choosing instead the hypothesis that Chaucer experimented in alchemical practice at Windsor during his time as Clerk of the Works – and their claims are now seen as somewhat naïve by many scholars 2.

Through a deeper investigation into the case of William de Brumley, however, my research – recently published in Chaucer Review – sheds new light on Chaucer’s real-life connections with both the case itself and the individuals involved 3.

Manuscript document stating that William de Brumley’s coins had been produced by the ‘doctrine’ of ‘William Shitchurch’, canon of the King’s Chapel at Windsor [document reference KB 27/448 rex rot. 14d.]

William de Brumley’s coins had been produced by the ‘doctrine’ of ‘William Shitchurch’, canon of the King’s Chapel at Windsor [document reference KB 27/448 rex rot. 14d.]The first thing I discovered when digging into the Richardson/Manly hypothesis was the identity of the priest, a canon of St George’s College and Chapel, whose name had become distorted by a combination of scribal mistakes (some perhaps intentional and satirical), and a misreading of the original plea roll by Richardson, who recorded the name as ‘William Shuchirch’. A closer reading of the document shows that it in fact reads ‘William Shitchirch’ (or Shitchurch) 4.

This reading was still problematic, and required a bit of archival detective work among our records here at The National Archives, and in the records of St George’s. Among the college’s records at Windsor there is record of one ‘Canon Whitchurch’, a founding member of St George’s who was recorded in documents at the college between 1362 and 1375 5. It seemed that he was a likely contender for our alchemist, a hunch which was confirmed in the contemporary working documents compiled by the clerks of the court (document series KB 29), where he was recorded as ‘William Whitchurch’ 6. Whether Whitchurch’s name was deliberately altered, or simply misrecorded, confirming his identity allowed me to rule out any connection with Chaucer during his time as Clerk of the Works, as Whitchurch had died some years before Chaucer took the job at St George’s.

Initially I thought I could simply reject the Richardson/Manly hypothesis at this point, but – given the close similarities between de Brumley’s case and the Canon’s Yeoman’s Tale – I first wanted to dig a little deeper into the characters named in de Brumley’s case, in order to rule out any further connections.

In the plea roll, we find a number of individuals who were actively involved in the trial, and possessed knowledge of the proceedings (to a greater or lesser extent): the juries. Unusually, de Brumley’s trial featured two juries, one which consisted of six men 7, and appears to be a regular medieval jury, but also a second group of ‘expert witnesses’, professionals in the coinage, who gave a second opinion on the alchemical coins and their value.

This group was comprised of Gautron de la Toure (the Master of the Mint whom de Brumley had attempted to defraud), John Norwich, a London goldsmith, and Adam Chaungeour, a London merchant who had previously run the London exchange. They valued the counterfeit coins as being worth 35s. but stated that they would have been worth £4 6s. 8d. had they been pure gold. These men were experienced professionals in the assaying of the coinage, a vital skill for those dealing with money in the 14th century, in the context of ongoing disputes over the coinage and the import of foreign coins. Money and bullion could be deposited at either the mint, to the customs collectors, or to one of the Exchanges found around the country, and as such, it was important that the officials at these institutions were competent in recognising and assaying metals, both English and alien.

One of these expert witnesses – John Norwich – went further, and actually took the alchemical coins away at the end of the trial, as well as acting as a surety (under a penalty of £40 if he re-offended) for de Brumley’s future good behaviour (after his release, having been fined 40s.). Whether these coins were sufficiently valuable in their constituent parts, whether he wanted to use them to help identify counterfeit coins in his daily work, or perhaps the coins were of interest in themselves as products of an ‘alchemical’ process which he wanted to study will remain unknown for now.

The key information, however, lies in his job at the time of the trial, collector of the petty customs of the port of London 8. At the time of the trial then, we find a direct link with the London Customs House, where, in June 1374, Chaucer would be appointed controller of both wool and petty customs in the port of London, in which capacity he audited the various collectors’ accounts. 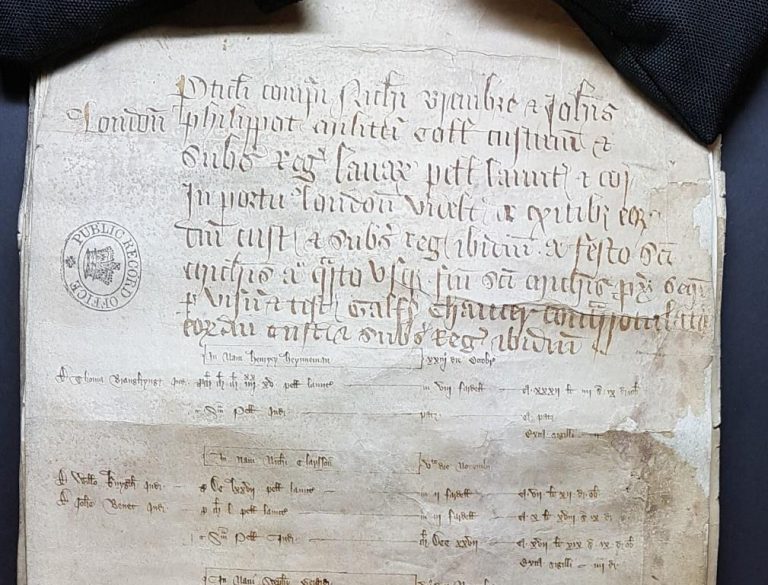 Particulars of account of customs at the Port of London 1380-1, overseen by Chaucer [catalogue reference: E 122/71/4]

Perhaps Norwich, or one of the other customs officials, told Chaucer the story of the coins as a cautionary tale, or perhaps the coins were still in the customs house when Chaucer took up his new position. As customs officials, both Chaucer and Norwich needed to possess a working knowledge of the coinage – both English and alien – with which they worked, and it seems likely this new type of counterfeit alchemical coin would have been of great interest to both men when drawing up their accounts.

It is interesting to speculate as well, that some aspects of Norwich’s own experience may have been reflected in the narrative of the Canon’s Yeoman’s Tale as the story passed via Norwich, and took on some of his experiences of the trial. In Chaucer’s tale, for example, the victim pays the princely sum of 40 pounds to learn the canon’s secret formula, the same sum of money that Norwich offered as surety for William’s future behaviour. While Chaucer may have used the core of de Brumley’s story in the Canon’s Yeoman’s Tale, however, it was his literary talent which could flesh out this core into a broader work of literature.