In part one and part two of this blog series I’ve been tracing the history of the ‘real’ Geoffrey Chaucer – the man behind the Canterbury Tales – as he worked his way through the medieval civil service as soldier, diplomat, accountant, customs official and royal builder.

Perhaps Chaucer’s best-known connection with Westminster is the time he spent as a Member of Parliament in the so-called ‘Wonderful Parliament’ of 1386 1. 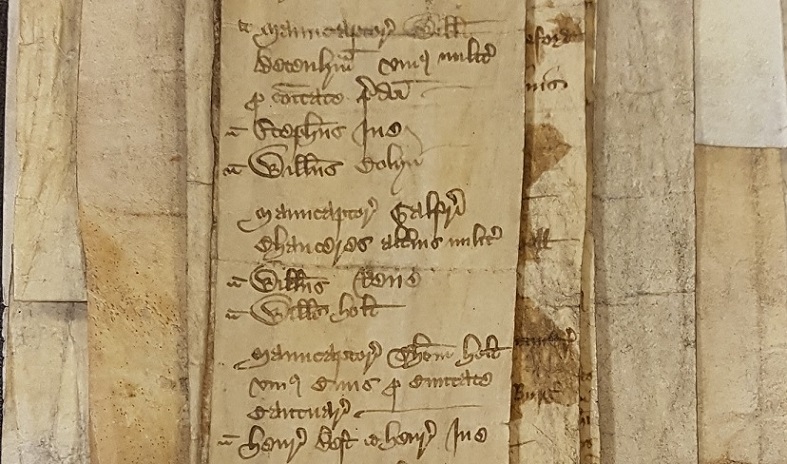 The poet, accountant and civil servant (named here as Geoffrey ‘Chauceres’) was elected alongside William Betenham in response to a writ of 8 August 1386, with Parliament sitting between 1 October and 28 November the same year. Parliamentary proceedings were especially tumultuous, and saw the impeachment of the Lord Chancellor Michael de la Pole (whose grandson would later marry Chaucer’s granddaughter, Alice).

Alongside William Betenham, his fellow MP for Kent, Chaucer claimed £24 9s for his parliamentary expenses for 61 days during the ‘Wonderful Parliament’ of 1386. Catalogue ref: C 54/227 m. 16d

When Parliament was dissolved at the end of November, Chaucer was able to claim his expenses as an MP: he claimed for 61 days which were paid at a standard rate of four shillings a day for Knights of the Shire (Parliament had only sat for 59 days, but provisions were made for travel to and from Westminster). Chaucer and Betenham, the Kentish MPs, claimed £24 9s – an extra sixpence each which was surplus to usual payments, but mirrored in payments to other MPs 2.

As an MP, Chaucer made the most of his time at Westminster outside of parliamentary proceedings: collecting annuities from the Exchequer; conducting business in his capacity as controller of customs (which he would soon give up); giving evidence in the refectory in the Scrope-Grosvenor chivalry case (as discussed in part one of this blog series and in another of our recent blogs); and taking part in legal proceedings at the home of English common law, Westminster Hall.

Chaucer and the law

It is in the records of the central common law courts that we find some of the lesser-known documents about Chaucer and his career. The poet’s connection with the legal system is not entirely certain; many scholars have argued that Chaucer may have received some sort of legal training, but no documentary evidence has yet been found to verify or dismiss this claim. The evidence we do have, however, does show a level of interaction, with legal records naming Chaucer as defendant, plaintiff and surety on multiple occasions. The collection of medieval legal records held by The National Archives is vast, and can be difficult to navigate at first, but the material found within can help to shed new light on medieval society – even on such famous figures as Chaucer. They can also make us reconsider these figures.

In May 1380 a document was enrolled in Chancery on the back of the close roll for that year (a common practice where documents of personal importance could be copied onto an official government record to ensure their survival). In this document, it was acknowledged that Geoffrey Chaucer was released from all further process by Cecily Chaumpaigne concerning her ‘raptus’. Further enrolments were made before the Mayor and Aldermen of London to release Chaucer of all actions, but – as the case went no further – it is difficult to work out the context of this case. Raptus (or rapere) in medieval legal terminology can be construed as either rape or abduction (possibly in order to pursue an advantageous marriage), and this case has been read in different ways by historians since its discovery 3.

Chaucer appoints an attorney to answer a plea of trespass and contempt by Thomas Stondon. Catalogue ref: KB 27/475 attorney rot

Medieval legal records are a great source to find connections between historical figures, and a large part of these documents include cases of debt. These cases can be useful in connecting individuals, but can also be frustrating when only limited details are given. In 1388, Chaucer was named in a case brought by a London innkeeper, Henry Atte Wode, for a debt of £7 13s 4d. Once again, however, Chaucer may have settled the matter outside of the court room: despite several writs for his attendance being sent into 1390, the case then disappears from the written record. 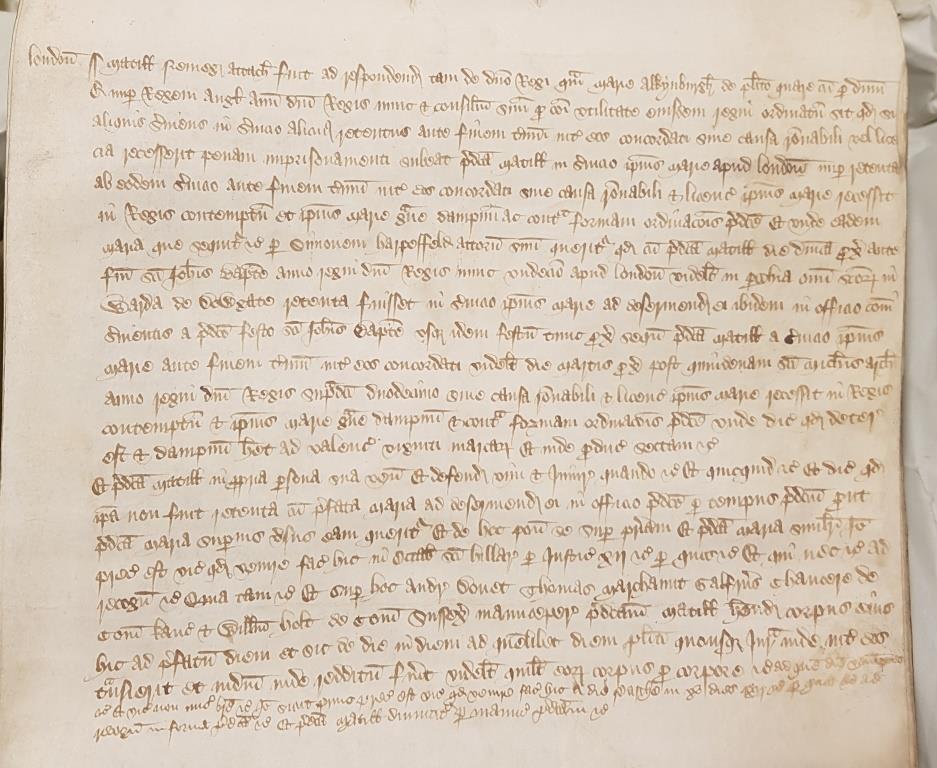 Chaucer acting as surety for the appearance of Matilda Nemeg accused of leaving her service to Maria Alconbury without licence (Chaucer’s name can be seen in the bottom right of the document, six lines from the bottom). Catalogue ref: CP 40/511 rot. 531

Besides being in court as a defendant, Chaucer was recorded on multiple occasions acting as a surety for appearance of defendants. On one such occasion in 1388 he acted as a mainpernor (someone offering themselves as surety for the appearance of a defendant) for Mathilda Nemeg, who had allegedly left the service of Maria Alconbury before the end of her agreed term of service. At the same time, Maria took out a simultaneous action against a clockmaker, John de Colayne, who had allegedly abducted Mathilda and taken her into his service 4. Acting as mainpernor, Chaucer was named as being from Kent, alongside Andrew Donet, Thomas Marchaunt and William Holt, although there is no evidence that he was required to physically involve himself in the case beyond the use of his name.

Writ enrolled in Exchequer memoranda roll in January 1391, discharging Chaucer from the repayment of £20, stolen by thieves near ‘Le Fowle O[a]k’ in the previous September. Catalogue ref: E 159/167

Chaucer’s various positions within the Civil Service and as an accountant may have made him a tempting target for thieves, as he transported money and valuable goods around the country. On one such occasion in 1390, in his capacity as Clerk of the Works, Chaucer was robbed by Highwaymen  at a location called the ‘Fowle Oak’ in Hatcham, Surrey. He was relieved of £20 6s. 8d, for which he was discharged in September 1390 by one Richard Brierly and others (although it is uncertain from the various testimonies whether there was one robbery or several, including possibly one robbery at Westminster). 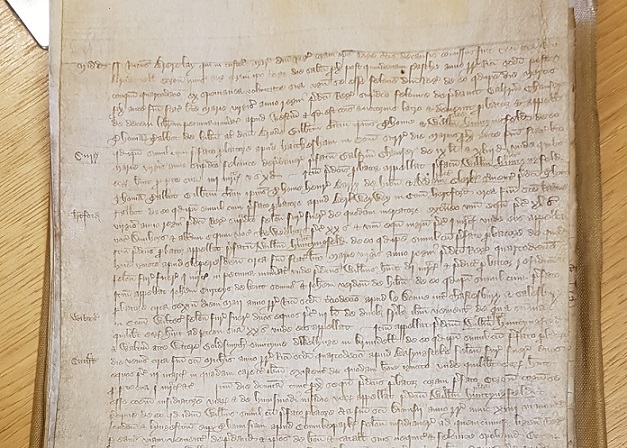 Confession of Richard Brierly April 1391 of having (with other) robbed Chaucer in the previous year. Catalogue ref: KB 29/37 rot. 22d

Having confessed and been defeated in judicial combat, Brierly was hanged, and the other thieves were either hanged or outlawed eventually (although two of them could plead that they were clergymen to try and avoid execution). However, this incident may have put Chaucer off the job of Clerk of the Works, as he retired from the job shortly after (as discussed in part 2) 5.

In 1399, Chaucer moved from Kent back to Westminster, where he leased a tenement in the garden of the Lady Chapel of Westminster Abbey until his death, probably in the next year. The traditional date of his death, 25 October 1400, is based on a now illegible inscription on his tomb in Westminster Abbey, as recorded by the antiquarian John Stow (although the tomb now standing in Westminster was not erected until 1556). Westminster, the heart of government and the Civil Service now, had been a major part of Chaucer’s life and career, and it seems a fitting location for his burial and later tomb.

Throughout these blog posts, I’ve tried to show that Chaucer – while a great poet and lasting English legacy – was also a real person, who walked the streets of London and Kent,  and worked hard at his day job before retiring home to his other writings in the evening. His experiences of the people he met, the situations in which he found himself, and the everyday life he saw on the streets may well have influenced his writing; by digging a bit deeper, we can start to see more of the ‘real’ Chaucer.

The Chaucer Heritage Trust is currently running a competition for aspiring Chaucer scholars and writers. If you know someone under the age of 19 who might be interested in taking part, the competition runs until 31 January 2018.