In the first of this series of blogs, I looked into the early life of Geoffrey Chaucer, tracing the poet’s years of military and diplomatic missions, networks of patronage in and around the royal court, and some of the gifts and rewards he received for his service.

In this blog I want to carry on searching for the ‘real’ Chaucer as he continued his journey through the medieval civil service, converting patronage into lucrative appointments: as accountant, customs official and royal builder. 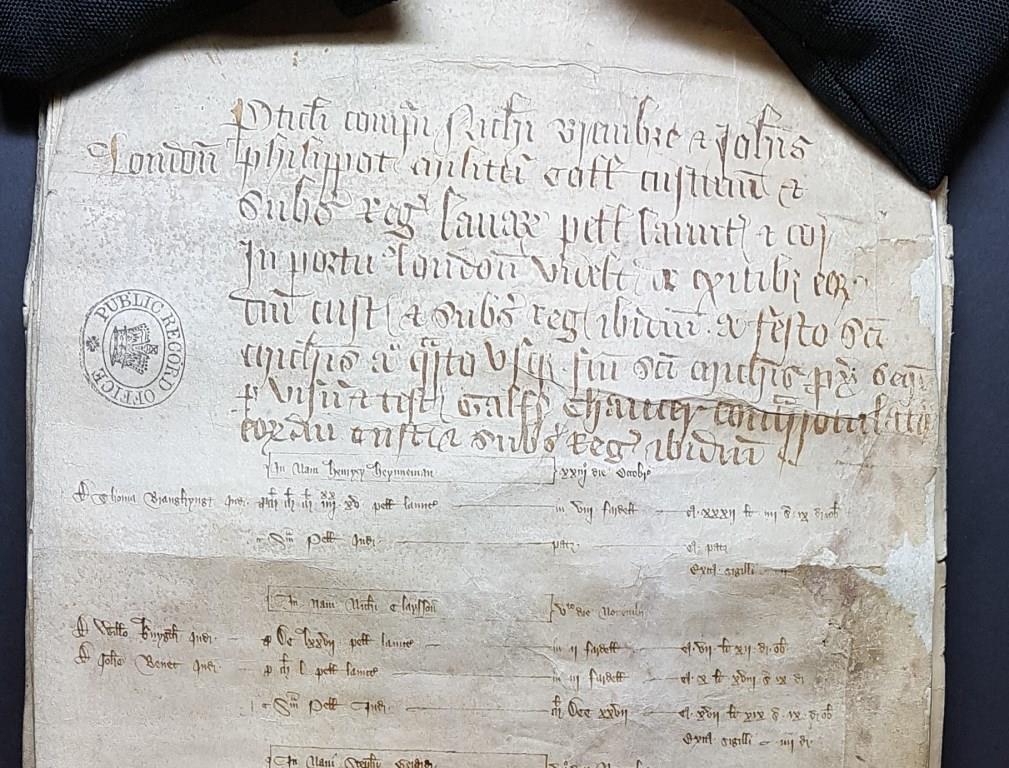 The first major position that Chaucer received was his appointment as controller of customs in the Port of London in June 1374, in which capacity he oversaw the collection of customs on wool, as well as customs on wine, cloth and other goods (known as the petty customs) 1.

These accounts provide a fascinating insight into medieval London life, as they give details of all individuals paying customs and subsidies on the wool trade each year.

As controller of the wool and petty customs, Chaucer kept his own records of customs collected in the port – acting in person and compiling rolls by his own hand –  in order to verify the accounts of the customs collectors (in this case two prominent merchants Nicholas Brembre and John Philippot). It is likely that in the course of his daily business around the bustling port, Chaucer would have come into contact with many of the individual merchants named in these accounts.

Looking through the names – grouped in the accounts by the ship they travelled on – we find various prominent London merchants (including both Brembre and Philippot) and also a significant number of alien merchants, including one ‘African Peter’ (Affrikano Petro), who paid customs on several occasions in this financial year. In the accounts, individuals were signified with abbreviations after their names as either ‘aliens’ (al) or ‘indigenous’ (Ind), and in the roll for this year we find 17 individual alien merchants, who took part in 228 customs transactions in this year alone.

It has long been suggested that it was during his time in the customs house when Chaucer began pursuing his literary endeavours, quoting the oft-cited passage from The House of Fame, where the poet writes of making his ‘rekenyges’, before going home to work on ‘another book’:

‘For when thy labour doon al ys / And hast mad all thy reckenynges,
In stede of reste and newe thynges / Tho goost hom to thy hous anoon,
And, also domb as any stoon / Thou sittest at another book’ 2

At this point in his career, Chaucer was leasing a dwelling above Aldgate, only a short distance from the customs house, where he could return to his writings in peace. But it’s certainly interesting to wonder how many of his experiences and daily interactions around the port, and with the tradesmen and merchants working there, may have influenced his writing at this time.

Clerk of the works

After 12.5 years serving as a controller at the Port of London, Chaucer retired from both the wool and petty customs in December 1386, amid concerns about the granting of lifelong appointments of controllers in ports around the country 3.

Indenture dated November 1389 delivering unused stock and tools to Chaucer, as the new clerk of the works. Catalogue ref: E 101/473/3-2

His time away from his ‘rekenynges’, however, was short and he was once again appointed to an accounting position in July 1389, serving as clerk of the works, the individual responsible for royal repairs and building works at Westminster Palace and the Tower of London, among other royal castles and manors 4. The complex nature of the medieval Exchequer meant that despite his new job, Chaucer maintained a connection with the London customs nonetheless, as it was there that he received several payments for royal building works, including a grant of £100 for repairs by the Tower of London.

One of several assignments of payment for 1389, authorising Chaucer to collect £100 from the London wool customs for repair works at the Tower of London. Catalogue ref: E 401/573

Shortly after his appointment, Chaucer’s remit was expanded to include St George’s Chapel in Windsor Castle – presumably because it was in a state of disrepair and the college were unwilling to pay for any repair works (12 years earlier the close had been described in a royal visitation as being ‘full of burres, brambles, weeds and other noisome herbs’) – although his remit did not cover the rest of the royal castle 5.

Beyond supervising repairs to existing buildings, Chaucer’s activities in these years included a variety of different assignments. For example, in March 1390, following a great storm that hit the south of England, Chaucer was one of those appointed as a commissioner of walls and ditches between Woolwich and Greenwich, an area much prone to flooding 6.

Commissioners were required to inquire about and assess flooding and potential breaches in water defences, ensuring the repair of any defects. They also took part in more general repair works, such as planting willow trees along the edges of dykes and preventing pigs from destroying riverbanks.

Elsewhere at Eltham (immediately south of Greenwich) Chaucer also had to deal with the consequences of this storm in his capacity as clerk of the works, where the storm had blown down 104 oak trees.

Commission in March 1390 to Geoffrey Chaucer and others to survey walls and ditches on the Thames between Woolwich and Greenwich. Catalogue ref: E 371/149, m. 30

Other building works were more temporary, such as these works at Smithfield, where Chaucer was tasked with building ‘les eskaffaldes in Smythfeld‘ for a joust taking place there (West Smithfield was a common location for medieval tournaments, executions and fairs).

Payment in July 1390 for Chaucer building scaffolds in Smithfield for jousts the previous May. Catalogue ref: E 159/167

The responsibilities of his position as clerk of the works, including travelling around the country with large sums of money – in which capacity he was attacked and robbed in 1390 (as will be discussed in part three of this blog series) – may have put Chaucer off his new job; he didn’t stay in post for long and was replaced by John Gedney in June 1391.

It is uncertain, however, just how willing he was to give up his position, as in July 1391, he was ordered to stop any further intervention in the repairs at St George’s Chapel, and was instead to transfer all dead stock to the new clerk of works, an order he followed a few days later.

Mandate to Chaucer in July 1391 to stop any further intervention in repairs at St George’s Chapel, as a new clerk of the works has been appointed. Catalogue ref: E 101/502/10/9

Chaucer’s retirement as clerk of the works brought his time as an accountant in the medieval civil service largely to an end, and he appears to have spent more time in Kent (where he had long-held connections) rather than the central hub of London. Towards the end of his life however, Chaucer’s connection with Westminster was somewhat renewed, leasing a tenement from Westminster Abbey in 1399, and where he would die and be buried a year later.

Westminster – as the heart of government – had been an important location for Chaucer throughout his accounting career as the source of most of his income in government service. But it also touched his life in other ways. As the home of Parliament, which he would serve as an MP; as the home of the English common law courts, in which he occasionally found himself; or as the location of his tomb, Chaucer had a strong affinity with Westminster, a connection I will be looking at in more detail in part 3 of this blog series.