UK Government – did we rule the Empire with 4,000 civil servants?

I was interested in some of the wider questions that were raised over the spring this year on the size and scale of the civil service. One of the straw-men that was set up was that the UK government, at the height of Empire, ran everything with 4,000 people, all of whom could be fitted neatly into Somerset House. With a little help from the team here (in particular Ed Hampshire), we thought it might be useful to assess this in some more detail. 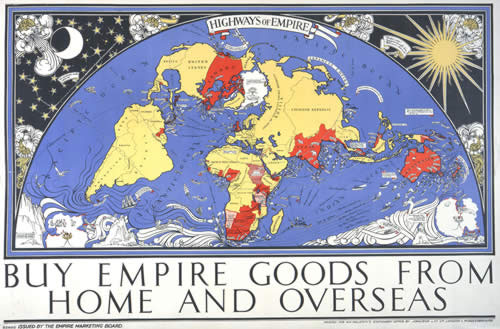 Starting with civil servants in Whitehall, 4,000 is about right for the interwar period, but too high for the 19th century. The central government departments were all very small until the First World War. For example, the Foreign Office had around 100-175 staff (including doorkeepers, porters etc.) up to 1914. The Admiralty had around 70-80 well into the mid-19th century.[1*] Four government departments (Colonial Office, Foreign Office, Home Office, India Office) were all housed in the building that now only houses about a 1/3rd of the staff of today’s FCO (Charles Street).[2*]

However, up to the early-mid 19th century you could argue that central government was really only about the armed forces, the court and the central co-ordination of revenue to pay for them. Most domestic policy – education, health relief, local justice etc. – were administered and largely paid for (or not) by local communities. Further, note that UK population according to the 1911 census was roughly half of our present population.

However, most civil servants did and do not work in Whitehall. Customs, Excise and the Inland Revenue staff were (and are) all civil servants. As a rough guide, in the mid-19th century just the Excise would have had at least 2,000 staff across the UK, with probably double that in the Customs at the same time.[3*] The workers in the Royal Dockyards and the Ordnance factories were all industrial civil servants until they were privatised in the 1980s and these were enormous concerns as far back as the late 17th century – probably the largest industrial employers in the country until the early 20th century. For example in 1780 Portsmouth Dockyard alone employed 2,400 workers (excluding salaried staff and short term hires which might have taken the workforce over 3,000), and there were at least 8-10 Royal Dockyards at home and abroad in this period.[4*] The numbers were similar at Portsmouth 80 years later.[5*] There would also have been employees of the Office of Works and the predecessor bodies to the Crown Estate which was and is a major landowner.

Taking names of public officials listed in the Imperial Calendar at selected dates we get the following approximate figures: 1832 – c. 8,000, 1898 – c. 14,000, 1920 – c. 24,000.[6*] However the Imperial Calendar would not have listed industrial civil servants – so these numbers can be taken to include only Whitehall and the various revenue collectors.

In addition, those who administered the Empire on the ground were not civil servants. Members of the colonial service were actually employed by the relevant colonial government they worked for, not the British government direct. The administration of the empire was undertaken by a relatively small number of officials but this was partly because British rule was often ‘indirect’ working through local elites who did much of the actual day to day governing, and with the implicit threat of military intervention if there was trouble.[7*] British rule of the interior of Africa was relatively late in any case and only lasted for a 60-70 year period between the scramble for Africa in the 1880-90s and de-colonisation the 1950s-60s. As a very rough guide c. 1,800 colonial servants are listed in 1874 and about c. 4,500 in 1927.[8*] However, this excludes the large number of locally employed staff (drivers, policemen, prison guards etc.), who numbered more than a couple of hundred in Hong Kong alone at the turn of the century, and probably many thousands across the empire.[9*]

British diplomatic representation abroad would have been much lower in the 18th and 19th centuries largely because there were many fewer nation states. In 1887 the UK had diplomatic or consular representation in 50-odd countries (including the major states making up the newly created German and Italian empires).[10*] It is probably three or four times that today. c. 3,000 active or retired diplomats or consuls were listed in the same year.[11*]

Total figures are extremely difficult to come up with, but we would suspect that it would have been at least 40,000 in the UK at the turn of the 19th/20th century. Given the work of the armed forces in the administration of Empire, it’s probably fair to include the armed forces and local colonial administration. In which case, the 4,000 is probably out by a factor of around 30.