Home > Blog > Remembering the past, growing the future: The story of the Pakistani community in Wakefield

Remembering the past, growing the future: The story of the Pakistani community in Wakefield

The 100th anniversary of the First World War has been noted for the way the diverse contribution to the war effort was recognised in new and important ways.

At The National Archives, through our project Loyalty and Dissent, we also looked at this contribution, both in terms of the service and sacrifice of South Asian and other colonial troops alongside an investigation of the more complex picture of dissent and resistance to empire that the war became a catalyst for.

In marking the end of the anniversary of the war, our attention also turned to those colonial seafarers in the merchant navy who, like their peers in the military, played an important role in Britain’s victory. At the start of 2019 we held a conference on the theme of BAME seafarers in the First World War, and more recently we have opened a display in Liverpool and Cardiff that helps mark the 1919 riots which followed at the end of the war, and which saw African, Caribbean, Asian and Arab colonial seafarers and the communities they were part of subject to attack in a post-war society recovering from war.

As part of our outreach work to highlight the often forgotten story of these early colonial seafarers, many of whom came from what is today Pakistan, and whose stories link with more recent migrations in the post-World War Two era, we collaborated with West Yorkshire Archive Service and Next Generation.

Both organisations had already started a project looking at the story of the Pakistani community in Wakefield. ‘This is my story, now tell me yours’ was a Heritage Lottery-funded project to set up the Wakefield Asian Archive. The project worked with young people to record stories and collect memories of their families and the wider community. Oral history recordings, photographs and documents were digitised to create the online archive and a large exhibition was held at West Yorkshire History Centre during summer/autumn 2017.

Support from The National Archives made it possible to extend this project, to include more of the women’s voices and to explore stories of earlier migrants from these communities. For further details of the extension to the project please visit West Yorkshire Archive Service.

We shared various stories contained in The National Archives’ own collection of the service of colonial seafarers. This included the story of Bag Kushia, originally from Mirpur, who served in the merchant navy and whose record leaves a fascinating footprint within the archives.

Using the few papers we have for him, we can already start to learn a lot about who he was, what he did, and his links to the UK. Kushia was part of a slightly later generation of seafarers who followed on the back of earlier ones, who were subject to restrictions following the end of the First World War, and whose record illustrates attempts to regulate and repatriate men who, as British Protected Persons and British Subjects, were now considered ‘aliens’.

The story of Mohamed Zaman helps to illustrate this earlier seafarer-turned-pedlar and helps draw out a complex picture of identity, work and belonging. 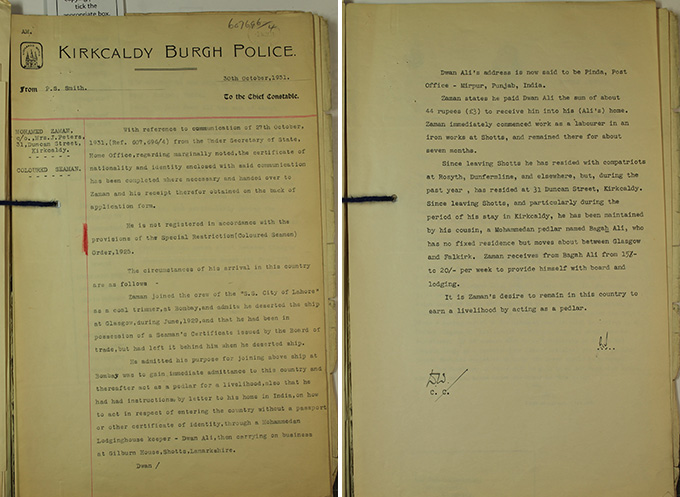 Sailors such as Zaman worked on ‘Lascar articles’, a form of contract that kept them on lower wages, and with less beneficial terms and conditions compared to British and European seafarers. This treatment led to some sailors jumping ship at British ports, and seeking better work and pay conditions using their networks of established contacts. From these and associated cases we are able to piece together interesting discussion and debate points, including to what extent were these men who had jumped ship illegal, and how much were they part of a British workforce trying to improve its lot here in the UK?

As part of this project, a new online learning resource for schools has been developed. The resource gives access to copies of records from The National Archives, West Yorkshire Archive Service and private collections, plus learning activities that teachers and educators can use both in the classroom and in other settings. 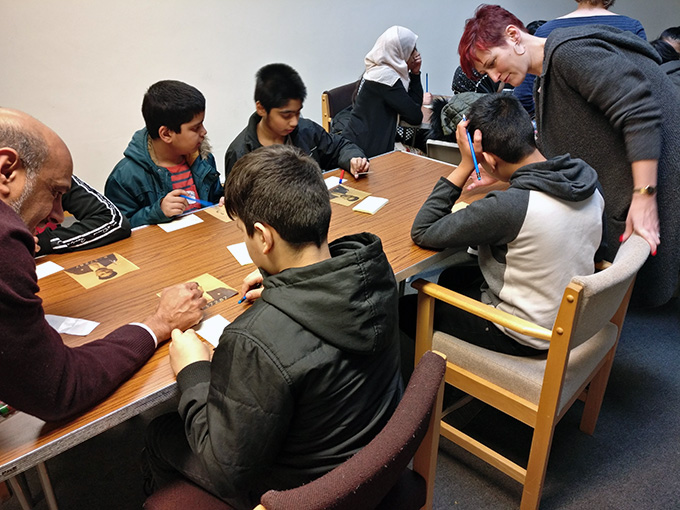 This type of collaboration sets in motion the kinds of regional partnerships we will be keen to develop further, working with diverse communities and using collections from both regional archives and The National Archives to engage and fascinate new audiences.

Anna Carter, co-author of this blog, is the Audience Engagement and Learning Coordinator at
West Yorkshire Archive Service.