Espionage is a complicated business. Not only do you, as a spy, have to maintain an alias and feed secrets to your handler, but there is always the possibility that your colleagues or even you yourself could be recruited by another country to become a double agent.

You would then essentially be living three – or more – lives. The first being the one that the outside world sees; the second as a spy for your country; and the third – the most secret of them all – as an agent for another state.

This is what happened to members of the Cambridge Five spy network, who became the focus of probably the most well-known real life spy story in British history. For years their stories remained hidden, and in many ways masked by popular speculation, but with the help of archives, historians, and records experts it is possible now to uncover the real story behind what we think we know.

This is what The National Archives is aiming to do with our new podcast series, On The Record. The first topic we are tackling as a mini-series is espionage; using previously secret personnel files and government reports we uncover the true stories of famous spies. In episode one we focused on the ‘Archetype of a Spy’, and episode two looked at the real stories of T. E. Lawrence and Gertrude Bell, who worked in the Middle East gathering intelligence and influencing politics.

In the third and final episode of the series we examine the stories of individuals accused of spying for foreign countries, including those who were part of the Cambridge spy network. I spoke to Stephen Twigge about the Cambridge Five and why they are so well-known as double agents. 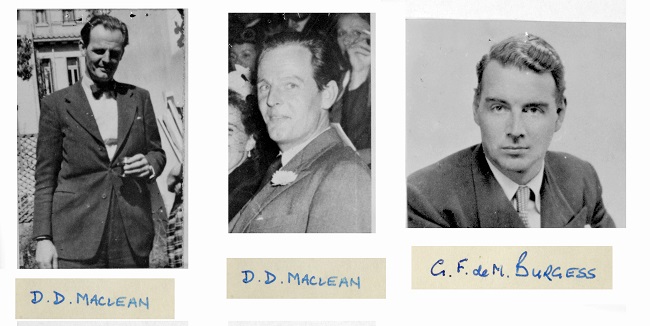 [Katie]: Why do you think the story of the Cambridge Five has become so well-known?

[Stephen]: It’s probably the enormity of the betrayal and the fact that they all came from privileged backgrounds. Communists were supposed to be working class, not part of the establishment studying at Britain’s top university. The volume of books and films on the subject has also helped to develop the mythology of the Cambridge spy ring.

Draft minute from March 1952 regarding the Burgess and Maclean case. FCO 158/27

[Katie]: Do you get any sense from the documents of how the men were able to manage the various pressures of being double agents?

[Stephen]: At first they seemed to manage well, but the pressure of maintaining a double life eventually became too much and they began to crack. Files released recently show that their Soviet handlers viewed them as hopeless drunks incapable of keeping secrets.

[Katie]: There are other people who have been named as additional members of the spy network. Do you think this speculation has helped to popularise the story and make it as well-known as it is today?

[Stephen]: Yes, there is a small cottage industry producing books on the subject and every now and again a new name emerges as having been part of the ring. Those recently ‘unmasked’ include Victor Rothschild, Guy Liddell and Roger Hollis. Whether there is any substance to the allegations is debatable but that doesn’t stop people speculating and adds additional layers of intrigue. It will probably keep people guessing for years. 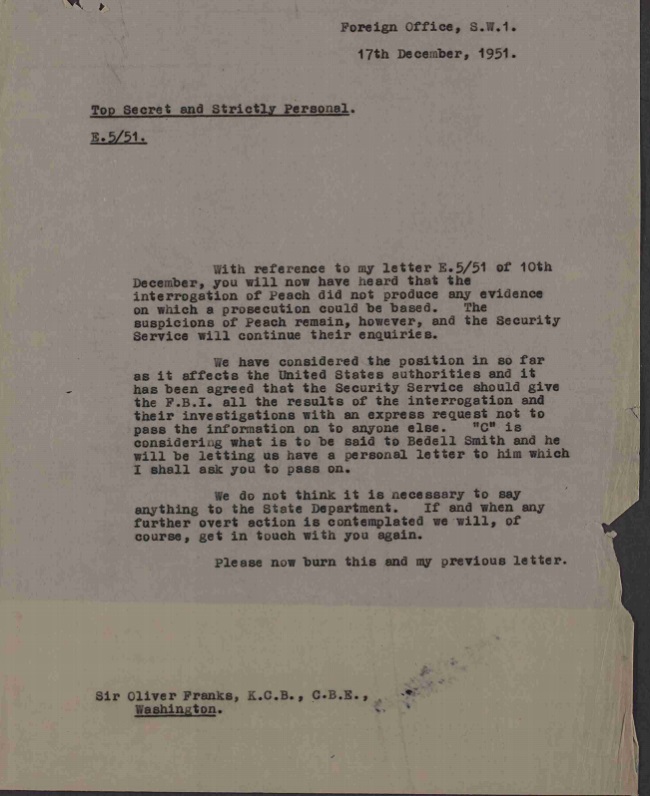 December 1951 letter from the Foreign Office to Sir Oliver Franks, UK Ambassador in Washington, advising Franks to burn this and the previous letter. FCO 158/27

You can find out more about the Cambridge spy ring in a previous blog on the subject.

All three episodes of On the Record are available on the Archives Media Player as well as on podcast listening apps.

To find out more about espionage, as well as life in Britain during the turbulent Cold War era, you may be interested in The National Archives’ Cold War season, which includes a new exhibition: Protect and Survive: Britain’s Cold War Revealed.