Archetype of a Spy

Whenever I think of spies my first thought is always of a James Bond-type character, dressed in a suit loaded with gadgets. Or of someone hiding round corners, bugging rooms and watching you through a newspaper with cut-out eye holes.

Of course I know that the reality isn’t that glamorous (or comical), but something I rarely consider is that my perception of spies, if I really think about it, is actually based on something very real. There are spies among us today, operating at this very moment, who are doing incredibly important work.

These spies aren’t a modern phenomenon – we have had spies for centuries. The history of espionage is embedded within our popular culture but often the truth about real spies is buried. However, with the help of archives and records it is possible to uncover the real stories behind what we think we know.

One spy story that is rarely talked about is that of Noor Khan, who you can find out more about in this blog. I spoke to Hannah Carter, an Education Officer here at The National Archives, to find out more about Noor and why we rarely hear about women like her. 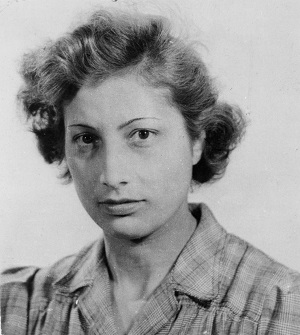 [Katie]: Noor Khan’s job title wasn’t ‘spy’ was it? She was a wireless operator, so how did she become involved in espionage?

[Hannah]: Noor had actually enjoyed a successful career as a children’s author before war broke out in 1939. From that point onwards her life changed dramatically, and her family moved from France to London. Initially she joined the Women’s Auxiliary Air Force and then secretly interviewed for the Special Operations Executive (SOE) in 1942.

The SOE’s mission was sabotage and encouraging revolt behind enemy lines. Noor’s cover was that she was enlisted in the First Aid Nursing Yeomanry, as this was the only combat role open to women in the Second World War. She had many of the skills that the SOE were looking for – she spoke French without a trace of an accent and was already an adept wireless operator. In fact she had been under Secret Services observation throughout the war. In order to work as a wireless operator Noor had to develop her coding and decoding skills, and she also had to increase her Morse code speeds. 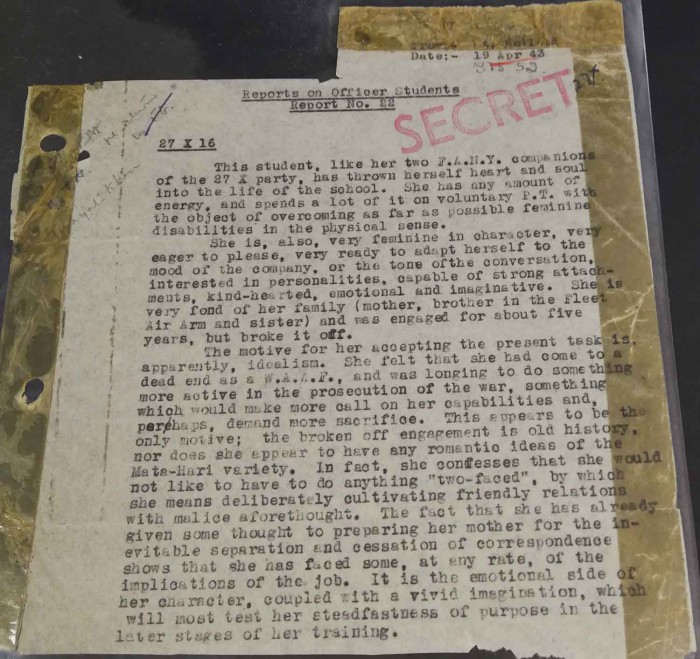 [Katie]: How do you think the role of wireless operator compares to the role of an archetypal spy?

[Hannah]: It didn’t involve as many James Bond-style gadgets, probably! Although the wireless transmitter itself was incredibly difficult to operate.

Noor was working in an extremely dangerous environment. The average life expectancy for wireless operators in occupied France was just six weeks. The Germans had developed methods to detect where transmissions were being sent from, so Noor had to constantly transmit from different locations, like rural farmhouses.

I suppose the idea of a spy being detached and isolated applied to some extent. Noor was left as the only transmitter in Paris. Also she wasn’t able to divulge her whereabouts or role to her family or loved ones. They only found out what really happened to her years after the war had finished. 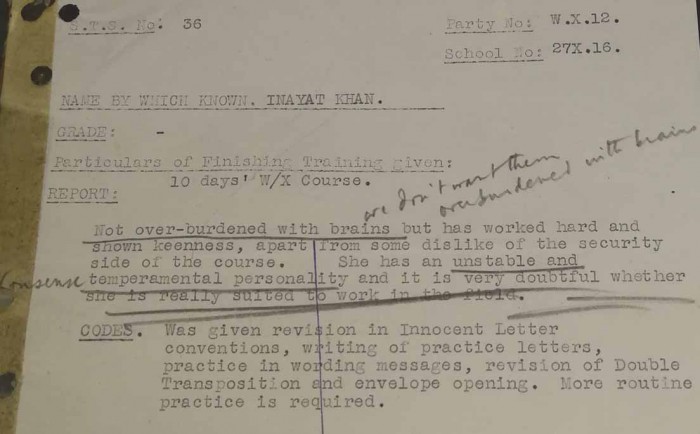 [Katie]: Noor wouldn’t have been the only woman to have worked undercover during the Second World War. Why do you think it is that stories like hers don’t come to mind when thinking of wartime espionage?

[Hannah]: I think it is interesting that we don’t associate the qualities of spies with women as readily. This was evident in the negative reaction of many in 2016 to the idea that Gillian Anderson, a woman, could play the role of 007.

In popular culture spies are usually depicted as overtly masculine, while women are decorative. As Noor’s story demonstrates, women’s abilities were often questioned at the time. Indeed although championed by Maurice Buckmaster (the head of the French section of the SOE), there are negative remarks to be found from officers in her files. In reality, she demonstrated many of the skills needed to operate in such a dangerous field.

There are other extraordinary stories of women to be found, such as Krystyna Skarbek, who saved two SOE agents from execution and threatened the German officer responsible that, if they died, he’d soon join them! Hopefully in the future we will see a more nuanced picture of what a ‘spy’ looks like.

On the Record is a new podcast from The National Archives. In our first three-part mini-series we focus on espionage. With the help of historians and records experts here at Kew, we are going to use personnel files, secret government reports, and declassified correspondence to uncover the true stories of famous spies.

In episode one – ‘Archetype of a Spy’ – you can hear more from Hannah about Noor Khan. You can also find out about the history of espionage, from the Anglo-Saxons to the present day, all with a bit of James Bond and the spies we are more familiar with thrown in.

The podcast is available now on the Archives Media Player. We will be releasing further episodes of the podcast regularly, so make sure to subscribe to the series to keep up-to-date.