This year marks the 300th anniversary of the signing of the Treaty of Utrecht and, as part of The National Archives’ anniversary campaign, I’ve invited a speaker to give a public talk on these far reaching diplomatic events. James Falkner, ex-army officer, noted 18th century military expert and author of six books on Marlborough and the War of Spanish Succession, will be our guest speaker for the day.

The Treaties of Utrecht (Dutch ‘United Provinces’, April 1713-September 1714) were a series of negotiations between France and Spain and the other major European powers, which ended the long drawn out War of Spanish Succession (1701-1714). France concluded treaties of peace with Britain, the Dutch republic, Prussia, Portugal and Savoy. The original antagonists in this world-wide conflict, France and the French party in Spain on the one hand, and the Grand Alliance formed by Britain and imperial Austria on the other, had at last fought each other to exhaustion (France in particular was economically exhausted by 1710), and only by a treaty such as this, for all its imperfections, could peace of a kind be achieved. 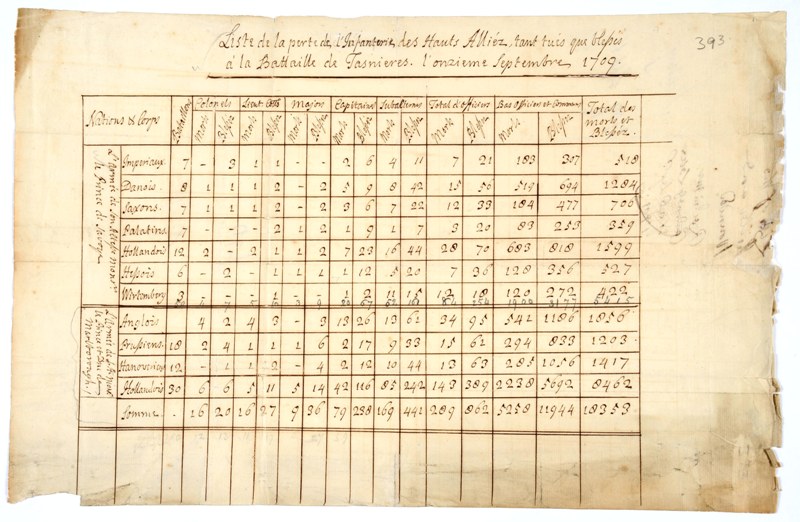 List of allied officers killed at the Battle of Tasnieres in 1709. Malplaquet was the hardest fought of all Marlborough’s victories, the French claiming a draw! SP 78/4

As a member of the Advice and Records Knowledge Department’s Early Modern Team, I will be organising an accompanying document display drawn from a diverse range of our records, highlighting both visual and textual archival sources. For example, SP 34 (State Papers Domestic) which is useful for political commentary, SP 87 (Foreign Military Expeditions) which covers the Duke of Marlborough’s campaigns, WO 78  (Military Maps and Plans) and ultimately the ‘State Papers Foreign’ which include intelligence reports from English envoys and agents across Europe.

By the treaty with Britain (11 April) Bourbon France recognised Queen Anne as the British sovereign and undertook to cease support for James Edward Stuart (the ‘Old Pretender’ son of the deposed James II of England and VII of Scotland), and the Queen’s extended Jacobite family. In reality this position was not officially resolved until the death of Louis XIV in August 1715. 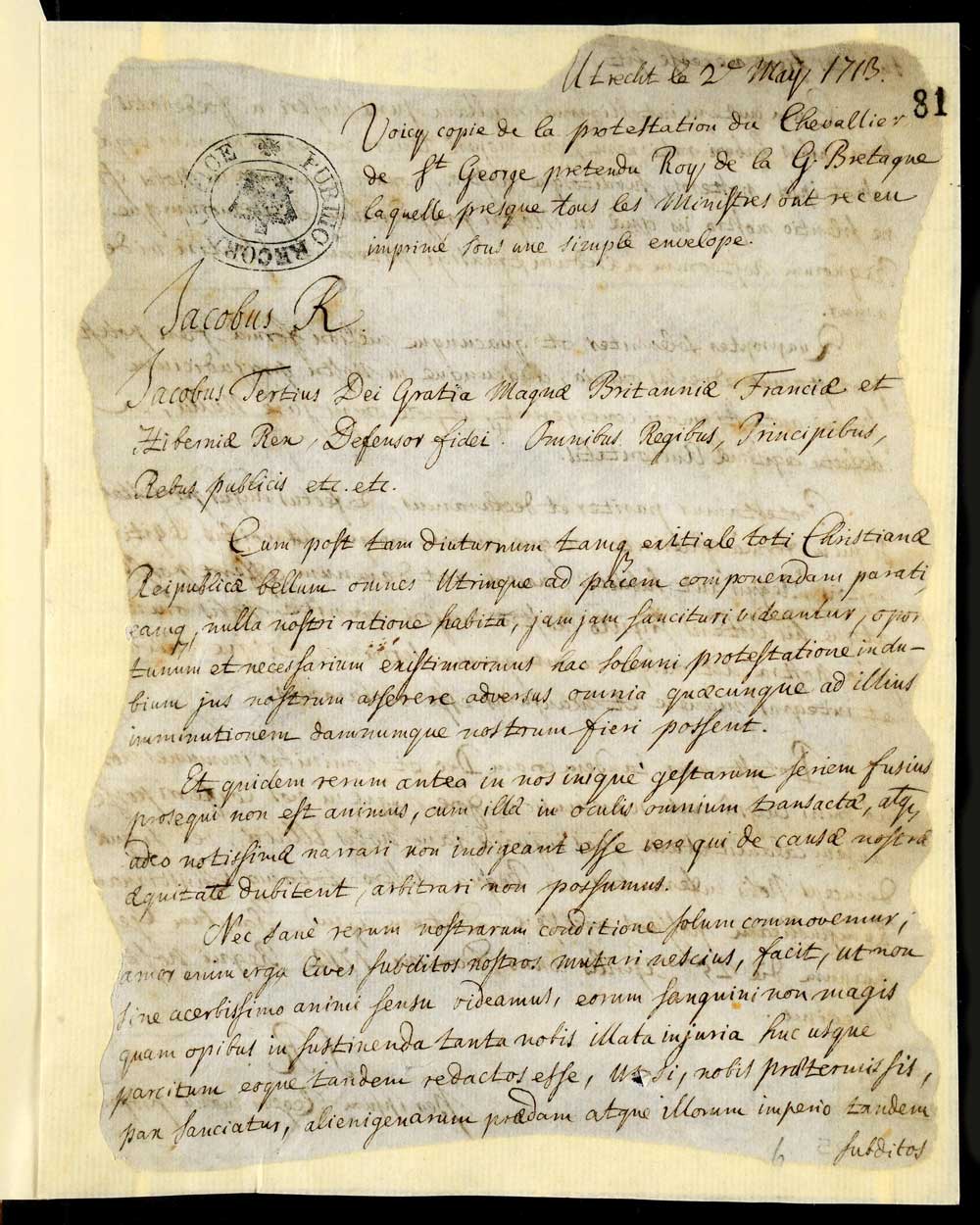 Territorially, Britain acquired vast stretches of North American ‘New France’, while Spain’s treaty with Britain (13 July) forced her to cede the strategic Mediterranean naval strongholds of Gibraltar and Minorca. The French also promised to demolish the fortifications at Dunkirk, which had been used as a privateering base for attacking English and Dutch shipping.

The treaty with Braganza Portugal recognised her sovereignty on both banks of the River Amazon, but the concerns, however, of various First Nations (in both North and South America) were not included in the treaty, particularly the virtual extinction of the ‘mission’ Indian population of Spanish Florida (namely the Timucua and Apalachee tribes). As a result of these negotiations, England acquired the infamous ‘asiento’ contract to supply the Spanish American colonies with 4,800 slaves annually, assigning the franchise rights to the South Sea Company for the next 30 years.

The question of the Spanish Succession itself was finally settled in favour of the Bourbon Philip IV (grandson of Louis XIV) who had driven out the Austrian Habsburg candidate (the so-called Charles III). The settlement at Utrecht established a pattern for diplomatic protocol and foreign policy for the next 20 years (until the upheaval of the less well known ‘War of Polish Succession’ of 1733-1738).

Map of the newly acquired naval stronghold of Gibraltar, 1712. MPH 1/16

Undertaking numerous cataloguing projects, The Early Modern Team will be busy preparing for the launch of the fast-approaching Jacobite anniversaries project in 2015.

Hope to see you on 31 October!