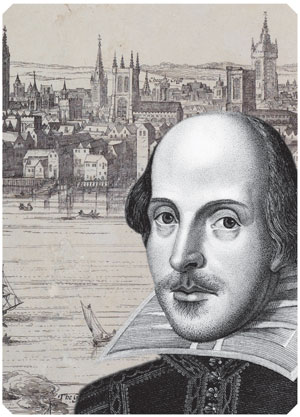 For this year, I am placed at London Metropolitan Archives to work with their Development team, creating and delivering new and exciting adult, school and local community group events.

Due to the current ‘Shakespeare in London’ exhibition at the Archives, we’ve recently run a day event, exploring the London the Bard would have known.

To illustrate the rapidly growing, cosmopolitan city, we developed talks designed to paint a picture of the streets, the trades and the people…

I have created a fictional account of London, using facts and information drawn from reference books and archive material:

‘Let’s start on the streets. Heading through the City of London, past the Tower on the left, stretching down to the river and containing many tortured souls. Head along to Lombard Street, the area for bankers and money and supposedly named after the Lombardy Italian traders which congregated in the area. 1

‘Now we’re here, the first thing to notice is how narrow the street is compared to areas like Cheapside. In fact, all the streets and alleys we can see spreading out, vein-like, in front and to the side are darker and enclosed. 2 One thing which emphasises the narrow lanes is the throng. People are everywhere. People walking quickly, weaving their way around others, hurrying to get about their business, trade to see to down by the river, gossip and news to exchange in St Pauls churchyard. As Thomas Dekker said (sarcastically) in 1606, “at every corner, men, women and children meet in such shoals, that posts are set up of purpose to strengthen the houses, lest with jostling each other they should shoulder them down.“ 3

‘The traffic is bad too; carts and litters carrying well-to-do ladies block the passages. And what can anyone do, when flocks of geese from Norfolk flood into the streets, squawking and stumbling their way along and bumping into herds of sheep from Kent? 4

‘As we move westwards, we leave behind the imposing city gates of Bishops Gate and Moor Gate further north. Down the wide sweep of Cheapside and pass the expansive St Pauls, where noise becomes ever louder. Booksellers near the yard flog their wares, people meet and gossip about the Court, exchange news and at the site of Paul’s Cross, preachers fight for the word of God to be heard. 5 From here, we’re close to Lud Gate and New Gate. The infamous prisons block out the sun as we pass by and we remember, with a shudder, the terrible warning, (the shorn, severed heads stabbed onto poles) up high for all to see on London Bridge. 6

‘Even without those dismembered bodies, we can see stocks placed in the city any day and executions at Tyburn sometimes. Punishments are public, reminding us to stay in line.

‘Amongst the crowds, we see and hear foreign faces. The French and Dutch come here for trade and work opportunities. Some are running from their native countries. The French Huguenots have been settling here, particularly in the 1570s, fearing persecution or even slaughter in France, following the St Bartholomew’s Day massacre in 1572. 7

‘Occasionally, you see a black face in the crowd. Black and Asian people from overseas have been brought to this city, supposedly as “servants.”

‘Many are baptised in the Christian faith and belong to their master’s household. You wonder what they must think of London after leaving their native countries. 8

‘Mind you, the immigration and the influx of people from other parts of England keep the population growing and the trades thriving. Without that, who knows what kind of city this would be, cursed as we are with smallpox, consumption and the dreaded plague. 9

‘Bad plague years are an ever-present terror. A new year wears on, the days get warmer, the death rate increases and people wonder; is this the start of an epidemic? Will I lose my children this year? Will I see the Christmas celebrations this winter or will I form part of the huge mass graves, along with other plague victims?

‘In 1603, Saint Dunstan parish, Stepney saw the deaths inexorably multiply, one person after another. 10 When will that happen again?

‘Let’s not think about those terrifying things. Let’s head to Bankside – to the cock-fighting; the bear-baiting arena or the theatres. Crowd into the Globe, let’s stand in the pit, watch a comedy, drink, laugh and gossip with our neighbours and friends and maybe flirt with a few good looking girls.’ 11