The Trinidad Water Riots of 1903

As part of the research for the ‘Caribbean through a lens’ project at The National Archives, I was fortunate to discover a series of images in the file CO 1069/392 concerning a dark chapter in British imperial history. This was the photographic documentation of a protest against the imposition of an increased water rate upon the residents of Port-of-Spain, Trinidad in 1903 and its avoidable and ultimately tragic aftermath.

A characteristic of Trinidad life in the late 19th century was an enormous waste of water. In 1874 with a population of 25,000 people, the delivery of water in Port-of-Spain was 1 ¾ million gallons – averaging 65 to 71 gallons per head, more than twice the allowance of London.  A report of 1880 stated: ‘In nearly every yard, and at almost every house, passers in the street will hear the sound of water running, and, as the gutters show, to waste, in addition baths of unnecessary and unknown dimensions have been constructed, fountains erected, and gardens irrigated to an extent which could not have been contemplated.’  1

It was recommended that meters should be used to prevent waste but this was ignored.

Much of the waste was caused by the well-to-do section of the Port-of-Spain population, mainly the large houses around the Queen’s Park Savannah. One example cited in a report of 1893 was a house where 8,000 gallons were consumed daily. Every well-to-do person constructed not an ordinary Roman bath, but large plunge baths containing as much as 1,000 or 2,000 gallons each – which were filled every day by letting the tap run all night. By the turn of the century there were 1,380 baths in Port-of-Spain exceeding 100 gallons in capacity. The 8,000 people who used them were estimated to consume no less than 1 ½ million gallons daily, an average of 187 gallons per head. 2

An engineer was called upon to reform the system in the 1890s and recommended the development of more sources of water supply by building reservoirs and introducing water meters.  In 1896, all of Port-of-Spain was up in arms at the ordinance authorising meters to be put upon large plunge baths and providing for increased rates. The Port-of-Spain municipality took the lead in this agitation and the Crown Colony Government (controlled by Britain) backed down.

In 1899  the Governor, Sir Hubert Jerningham, didn’t help matters by abolishing the Borough of Port-of-Spain and its council, deemed to be petty and inefficient in the management of its affairs.  Henceforth, the affairs of the burgesses were to be managed by central government. In 1902, an ordinance was introduced again – and again public meetings were held against the government and the meter system. The bill was withdrawn but this time people were prosecuted for wasting water. 3 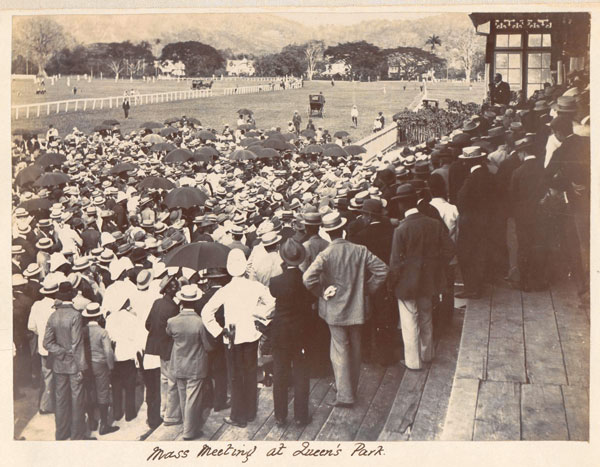 On 5 March 1903, yet another water ordinance was published. The second reading was scheduled for 16 March but because of disorderly behaviour of spectators in the council chamber on that day, the Executive Council was adjourned to 23 March. As soon as the bill appeared on 5 March, violent articles were written against it. This led to aggressive speeches being made  by members of a Ratepayers Association at a public meeting at the Racestand on the Savannah (or Public Park), on 14 March. The Ratepayers Association was led by the disenfranchised Mayor of Port-of-Spain, John Cox Newbold, who led ratepayers in the belief that water was a right of existence and not a scarce commodity to be bought and sold.  (Images  depicting this meeting can be seen in CO 1069/392 and on our Flickr page.

On 23 March, the Governor, Sir Cornelius Alfred Moloney, added more fuel to the flames by insisting on admission by ticket only into the council chamber at The Red House, the seat of colonial government, to hear the debate. It was this notice – that tickets would be required by the public for admission – that acted as a spark for the water riots. 4

What happened on 23 March?

The Red House was pelted with stones by a large crowd of people (or those members of the Ratepayers Association gathering in Brunswick Square) and eventually  burnt to the ground. The police were called out, two Royal Navy ships, The Pallas and The Rocket landed troops, in addition to the 250 men of the Lancashire Fusiliers already deployed at barracks in Port-of-Spain. The ominous Riot Act was read to the crowd, and then the policemen were given the order to fire on the protestors.  As Eric Williams wrote later, ‘It was war between bottles and stones on the one side and bullets on the other’.   5 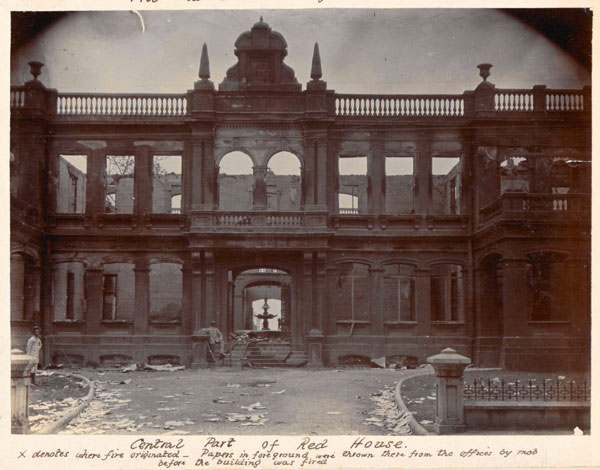 The Commission of Enquiry formed after the riot detailed that 471 rounds of ammunition had been discharged. A total of 16 people were killed on the spot or died of their wounds through the use of ‘authorised firing’ and 43 others treated at hospital for injuries received.  6

The Commission also concluded that the bringing of the bill without consulting members of the public, informally, if need be, at first, and then bringing in the second reading within ten days of publication, was very unjust. As the Commission concluded, ‘…it looked as though the government cared little for public opinion’.  7

In CO 295/425, a very revealing letter exists which might explain why the riot occurred in the first place. In response to an article written in The Mail newspaper by a supporter of Governor Maloney, the Reverend W.L.Keay J.P and Vicar of St Michael’s Diego Martin, wrote a rebuttal to Secretary of State for the Colonies, Joseph Chamberlain. The article had argued that ‘there was not the slightest intention upon the part of the Governor … to force the bill through’. The Reverend replied ‘this is a deliberate falsehood, for they were asked to delay it and would not’.  Further, the article argued that ‘the agitators led a mob into the Council Chamber’. The Reverend replied ‘another falsehood: the persons present were members of the Chamber of Commerce and members of the Ratepayers Association; there was no disturbance.’ Further contradictions are made in the letter, but clearly the Governor was widely disliked for his actions. Reverend Keay concluded his letter with the opinion ‘..A supercilious and insolent disregard of enlightened public opinion has been the distinguishing feature of Sir Alfred Maloney’s Administration’. 8

The Red House was completely rebuilt by 1907, it’s most notable addition being the imposing rotunda or dome which is its most recognisable feature today. It was not until 1914 that the local council and municipal ordinance of Port-of-Spain were reinstated. But the Commission did recommend that water management affairs fall under the rule of local rather than central government – a victory for local democracy… eventually.