Queer club culture in the 1930s was vibrant and varied, especially in the growing post-First World War underground scene. Music was central to the character of many of these venues, from the music hall artists of Billie’s Club to the expanding London jazz scene.

Particularly prominent among these unlicensed clubs was the Shim Sham, a queer-friendly jazz club described in Metropolitan Police records as a ‘den of vice and iniquity’ 1. The club originally opened in 1935 on Wardour Street in the heart of Soho, and from that point on it constantly attracted police attention. The club was heavily associated with African American culture, the name of the venue itself taken from the shim sham dance – a lively tap dance originating from Harlem, New York. The Shim Sham seems to vividly represent the ethnic and cultural diversity of London at this time. 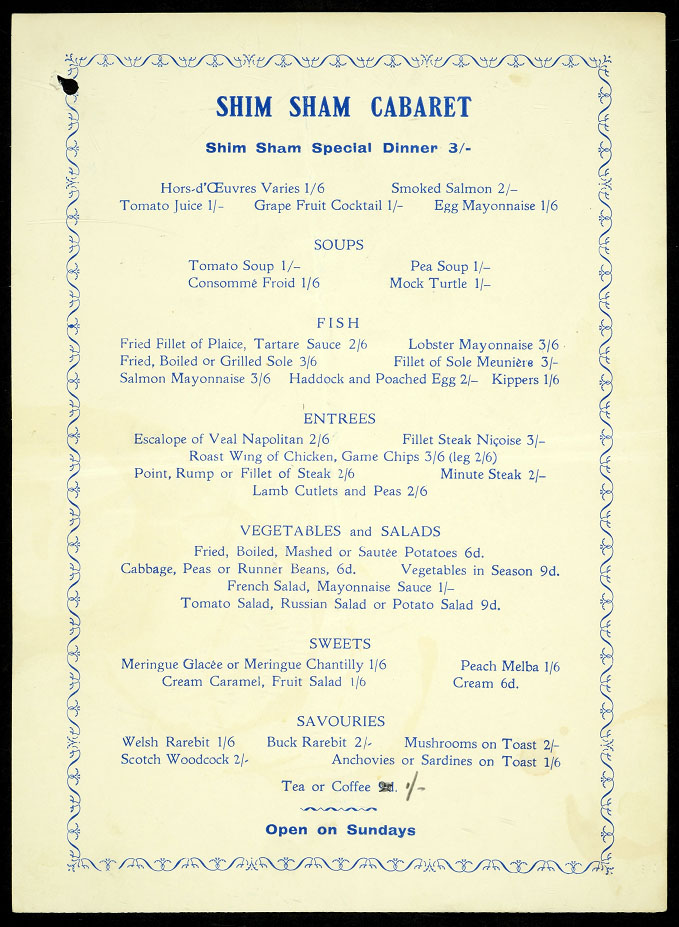 Image of a menu from the Shim Sham Cabaret, taken as police evidence in relation to unregistered clubs, bottle parties and sale of liquor out of hours, 1935-1938. Catalogue ref: MEPO 2/4494

Described as ‘London’s miniature Harlem’, the Shim Sham was central to black jazz music in London in the 1930s, with a reputation for being the first to receive music from across the Atlantic. Bottle parties offered opportunities for new musicians to play and improvised jazz jam sessions were noted to take place in the venue. The police raids for liquor licensing give a snapshot of who was in the venue on this particular night; as well as Cabaret dancers there is Hetty Booth of the Palm Beach Stompers and Cyril ‘Midnight’ Blake, a Trinidadian jazz trumpeter 2. 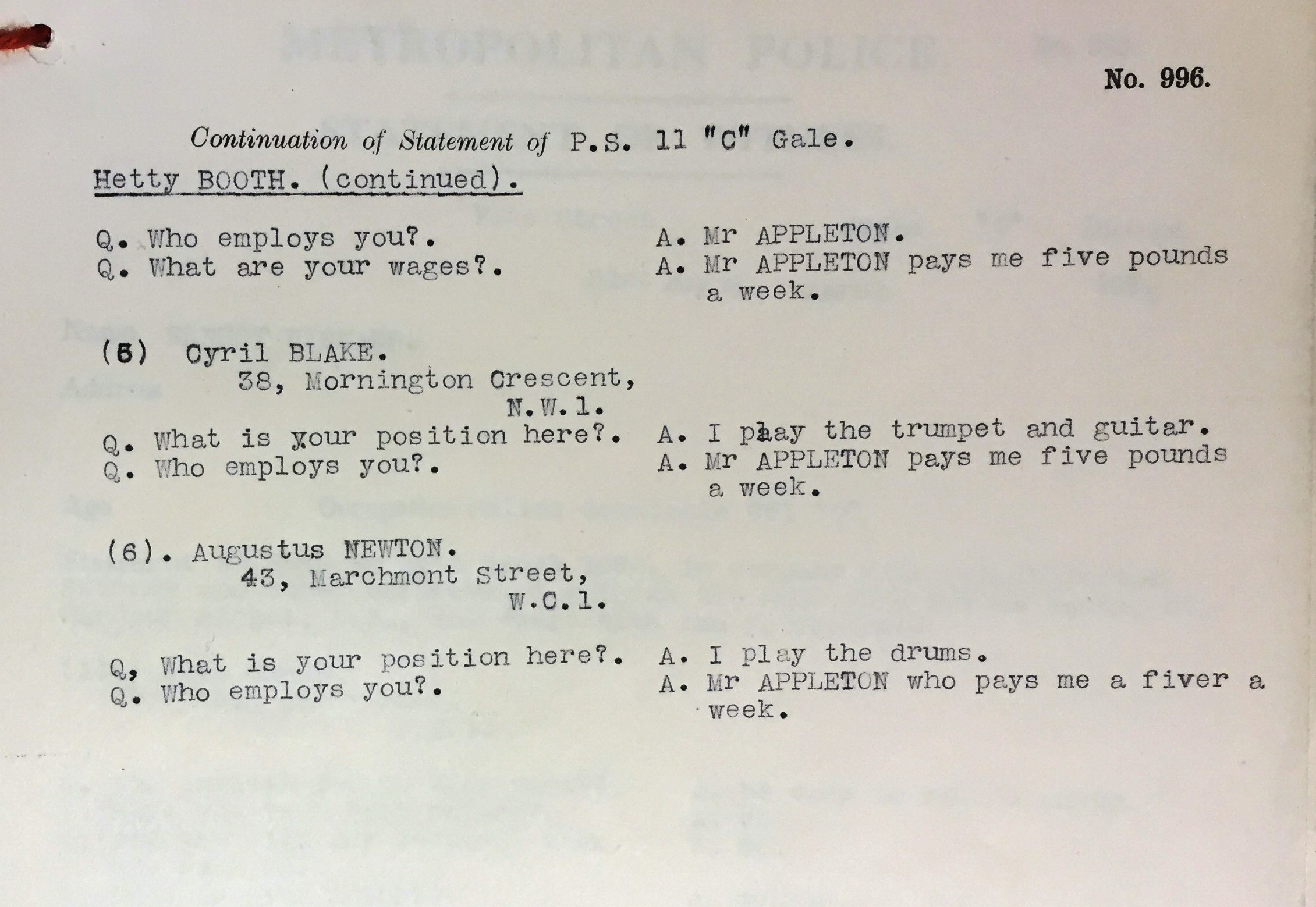 Music was key to the life of the club, which had a small elevated bandstand and a curved bar central to the space, with ample room for dancing. Undercover police observations noted that the dancing was of ‘an indecent manner’, with PC Alywn Stannard observing that ‘most of the couples appeared to derive sexual pleasure from the method of dancing’. Black British, Caribbean and African American performers utilised this performance space, which was in itself risky in an era of restrictions on American music performers in the UK 3.

The Shim Sham was also a space for radical politics, including pan-Africanism and anti-fascist meetings. Marc Matera noted that such clubs provided ‘sanctuaries from white hostility and, in some cases, as sites of political organising’ 4.

‘A den of vice and iniquity’

Public letters were repeatedly sent to police raising concerns around the morals of the club. A local resident wrote to the Police Commissioner signing themselves as ‘a neighbour of Wardour Street’ complaining that:

‘In the Shim Sham there is a negro band, white women carrying on perversion, women with women, men with men, a second Caravan Club.’ 5

These letters reflect the social climate of the time; even though same-sex relationships between women were never criminalised, they were not socially acceptable either. While we know women frequented such clubs and spaces in this era, they are rarely mentioned. However, this files does note women having relationships with other women, including a remark by police of two women entering the club, ‘both of the Lesbian type’.

Authors of such letters often used anonymous aliases, such as ‘An Englishman’, ‘A citizen’ and ‘pro bono publico’ (a Latin phrase meaning ‘for the public good’); this seems to be an attempt to take a moral high ground, drawing on themes of race, class and civic duty. Such letters increased police interest in these venues. The letter signed by ‘A citizen’ declares the Shim Sham to be a ‘rendezvous for homosexual perverts’, but the author goes on to make a return visit to the club. 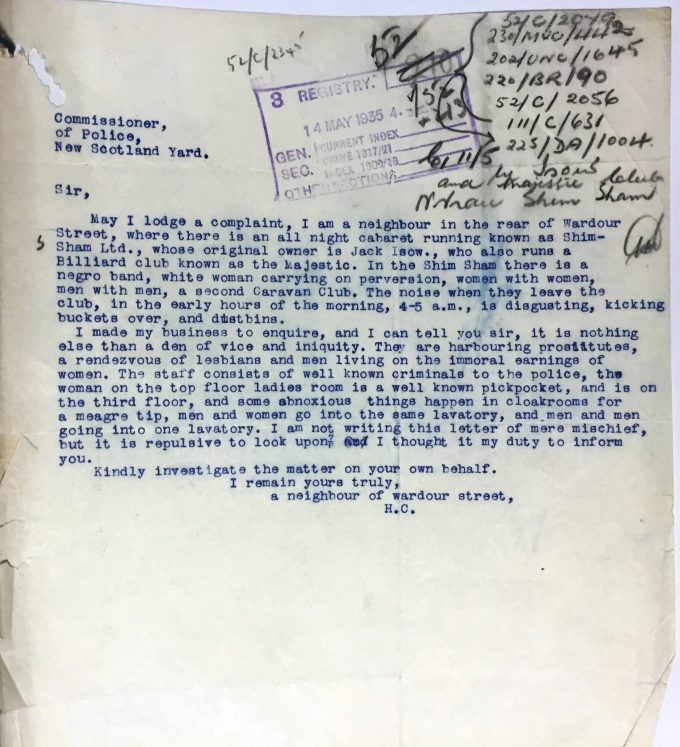 Letter signed ‘a neighbour of wardour street’ in complaint to the Shim Sham. Catalogue ref: MEPO 2/4494

As well as the interest in queer relationships taking place in the club, the interracial relationships caused controversy. The venue took the position of welcoming a variety of patrons, both black and white. A police report by Stannard from June 1935 noted:

‘there was also about 20 coloured men present dancing with white women. Many of the persons present were drunk and I recognised many of the women present as prostitutes.’ 6

One letter noted, ‘the encouraging of Black and White intercourse is the talk of the West End’. The public outcry seems to be enhanced by the combination of perceived sexual ‘deviance’ and the varied racial background of the clubs clientele, leading to extra controversy and extra police attention.

As well as the diverse clientele, the owners also attracted scrutiny. Jack Isow, known as ‘Flash Isow’, was a Polish Jew born in Russia. Isow was a renowned Soho club owner, and The Shim Sham was said to be bringing him a substantial £100 a week in profit. This was far from Isow’s only interaction with the police – he was later associated with gambling, police bribery and black market food-selling 7. 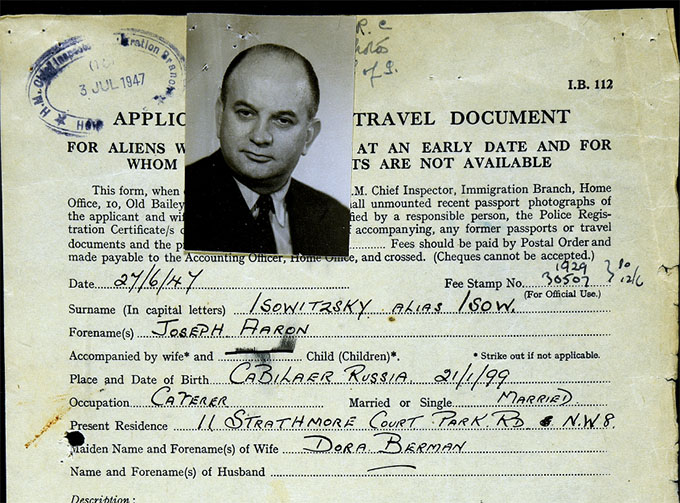 The other owner was the African American singer Isaac (or Ike) Hatch, who performed at the club. Hatch, originally from New York, settled in London in 1925 8. Hatch served as the public face of the club, and was already a prolific figure on the London jazz scene, appearing regularly on the BBC, particularly in the popular Kentucky Minstrels show (a video of Hatch singing can be found here).

In 1933, Hatch was invited by writer Nancy Cunard to serve on the London organizing committee in support of the Scottsboro boys. The nine African American boys, aged between 14 and 22, had been wrongly charged with assaulting two white girls, which caused international campaigns in their defence. This underlines the political nature of the people involved with this space.

While the venue caused controversy through its associations with black music artists, progressive politics and same-sex relationships, it was actually the club’s liquor licensing that originally gained it notoriety with the police.

Similar to many other clubs in 1930s London, the Shim Sham tried to avoid liquor licensing regulations by running as a so-called ‘bottle party’. Indeed, The Daily Express described it as the ‘first bottle party in London’. Such unlicensed clubs attempted to evade the law by claiming to run as a private party and offering alcohol on the basis that it was pre-ordered through wine merchants. This essentially avoided the restrictions of conventional licensing hours, aiming to attract punters around the clock.

Metropolitan Police records show concern in the rapid increase in bottle parties operating during this era, with a steady rise from 1934 onwards 9. On 5 July 1935 undercover police first raided the premises of the Shim Sham on the grounds of liquor license evasion, and the venue was charged with operating as an unlicensed club. Ultimately they received fines totalling £200 10. 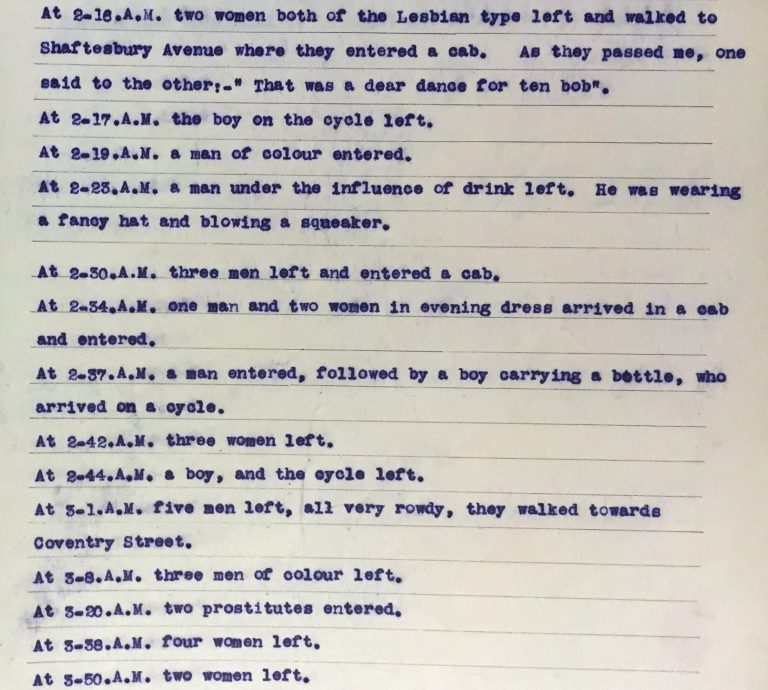 Photograph of a document noting police observations on the Shim Sham club, including a reference to ‘two women both of the Lesbian type’. Catalogue ref: MEPO 2/4494

After the 1935 raid the venue re-opened as the Rainbow Roof, and was subject to further charges of unlicensed dancing and music in May and June 1936. In a climate of police surveillance, clubs such as the Shim Sham had to be resilient to change. However, it is clear that there was continued demand for these venues, and this drove them to reopen.

The Shim Sham’s subversive mix of race, music, politics and sexual openness made it stand out to both the police and public. It can now be seen as progressive venue that has since been championed as a black queer space and a key source of new music.