The power of photography: Black History Month at Roehampton Library

Photographs evoke memories of the past both individually and collectively. During this Outreach session it was evident that our collection provoked memories of times past and in distant places, thousands of miles from Roehampton Library. 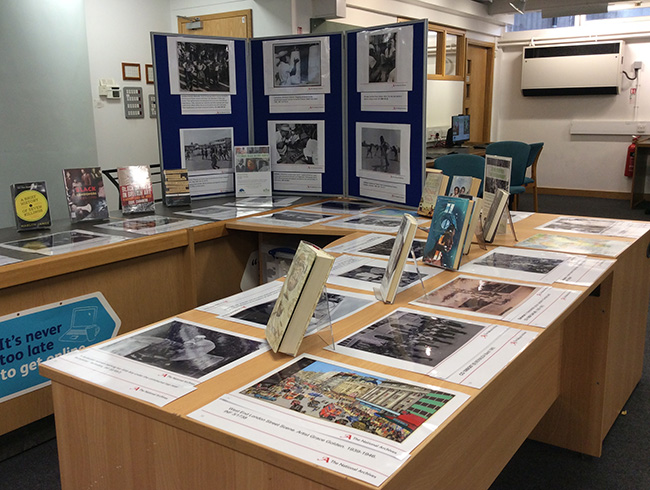 Marcus, who chose an image of a band (INF 10/54/21), talked of a music project he was involved with in a shanty town in Apartheid-era rural South Africa as a young man. He taught youngsters the guitar and the marimba (similar to a xylophone, a large instrument with large wooden bars). Marcus recalled that the project promoted a skill of learning a musical instrument in an impoverished community and encouraged social well-being. The project indirectly helped trade unions in their disputes with employers, as music boosted morale. Perhaps more affectingly, it recalled memories for Marcus of the awful living conditions of the people living in the townships. 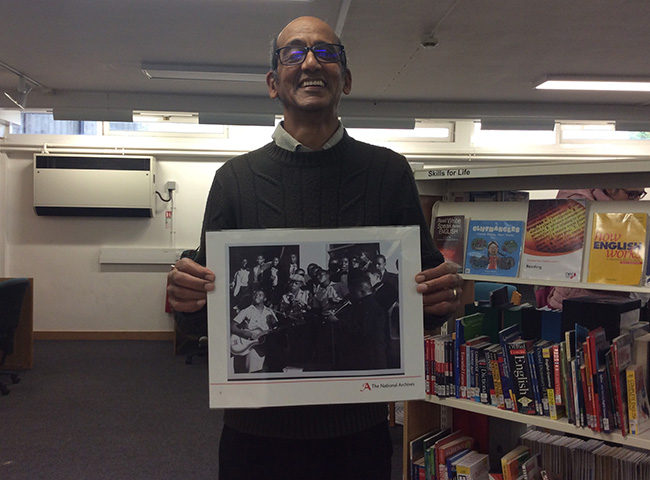 Rephael chose an image of an outdoor market in Bridgetown, Barbados (INF 10/39/3), which evoked memories of marketplaces both in Montego Bay and Kingston, Jamaica as well as markets nearer to home like Brixton Market. He recalled the different fruits and vegetables on sale in Jamaican markets such as pumpkins, guavas and cacao (the source of cocoa beans), as well as coconut milk and jelly. 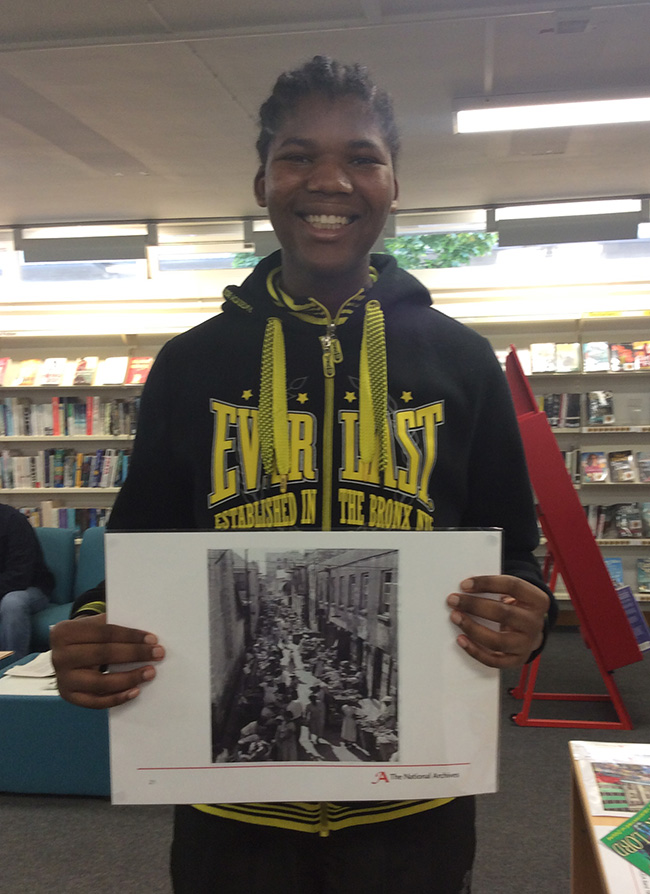 Rephael holding up an image of INF 10/39/3 – recalling market places in London and Jamaica. ‘I see all sorts [in the market] – it’s like a melting pot of society.’

Interestingly Rephael also observed ‘the melting pot of society’ in Jamaica, actually using that phrase to describe the rich and poor of his community. He also mentioned the national fruit of Jamaica – ackee, a key ingredient with saltfish of the national dish. He also recalled that Jamaicans now only wear the bonnets and dresses worn in the photograph on ‘church days’ or Sunday worship. The photograph also provoked happy memories of his own family membership and attendance of church in Kingston.

Amtui, who is originally from Lahore in Pakistan, chose to speak about an image in the collection of a farmer and wife travelling on a donkey cart. This image is from our CO 1069/366 Guyana collection but demonstrates that a primitive form of transport evokes universal memories of transport. Amtui informed me that the cart is called a tanga (light carriage with single pair of large wheels) in Pakistan and is powered by a horse rather than a donkey in rural areas. The tanga and/or rickshaw is used as a cheap form of transport in towns and rural areas to convey families to parks or family occasions. Amtui stated that as a child the whole family (six people) could be conveyed by the tanga to venues. The tanga is most commonly used to convey foodstuffs like vegetables or hay to various locations in Pakistan. Unlike the image of the Guyanian farmer who probably owned his carriage, the tanga in Pakistan is more of a hired taxi service. 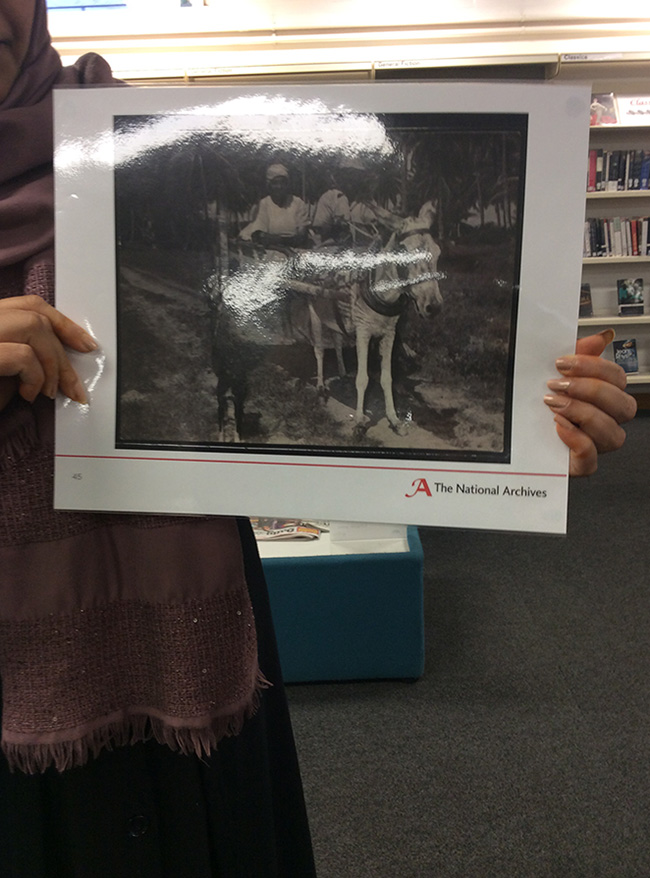 Amtui holding up an image of CO 1069/366 – recalling a ‘tanga’, which the British would call a horse and carriage

You can listen here to the interviews conducted with Marcus, Rephael and Amtui.

Promoting The National Archives’ collection to new audiences is part of our remit: we were delighted to work with Dr Janice Fernandes, Library Manager at Roehampton Library, to share a selection of our photographic records to a public audience at a local level. The images on display included photographs from the CO1069 Colonial Office collection as well as the INF 10 Ministry of Information collection. Images of everyday life in Africa and the Caribbean were displayed during Black History Month to encourage visitors to the exhibition to select an image that provoked a memory for them. As an incentive, we offered each participant a ‘reminiscence token’ – a laminated copy of their chosen photograph accompanying a quoted memory and their name. 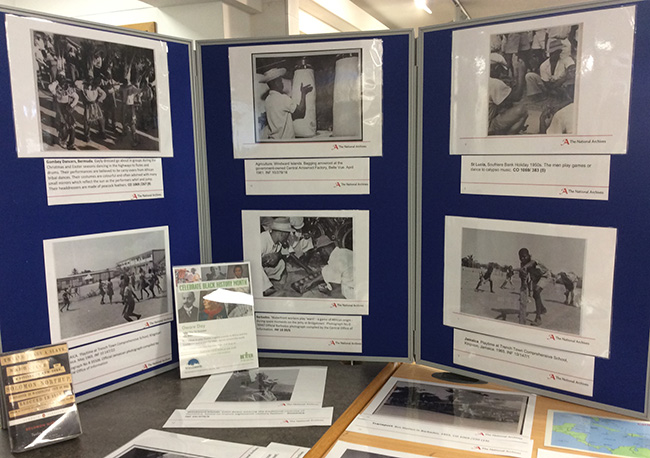 Close up of display at Roehampton Library

Many of the images used in the event at Roehampton can be viewed in an online exhibition called Caribbean through a lens explored.