During 1938, political tensions in Europe heightened as the major powers continued to rearm. Adolf Hitler, engaged upon a policy of territorial expansion, had already completed the Anschluss (incorporation of Austria) in March. Hitler next made demands upon Czechoslovakia, including the annexation of Sudetenland, a part of the country dominated by ethnic Germans. Within Czechoslovakia, these demands were supported by the Sudeten German Party, led by Konrad Heinlein. 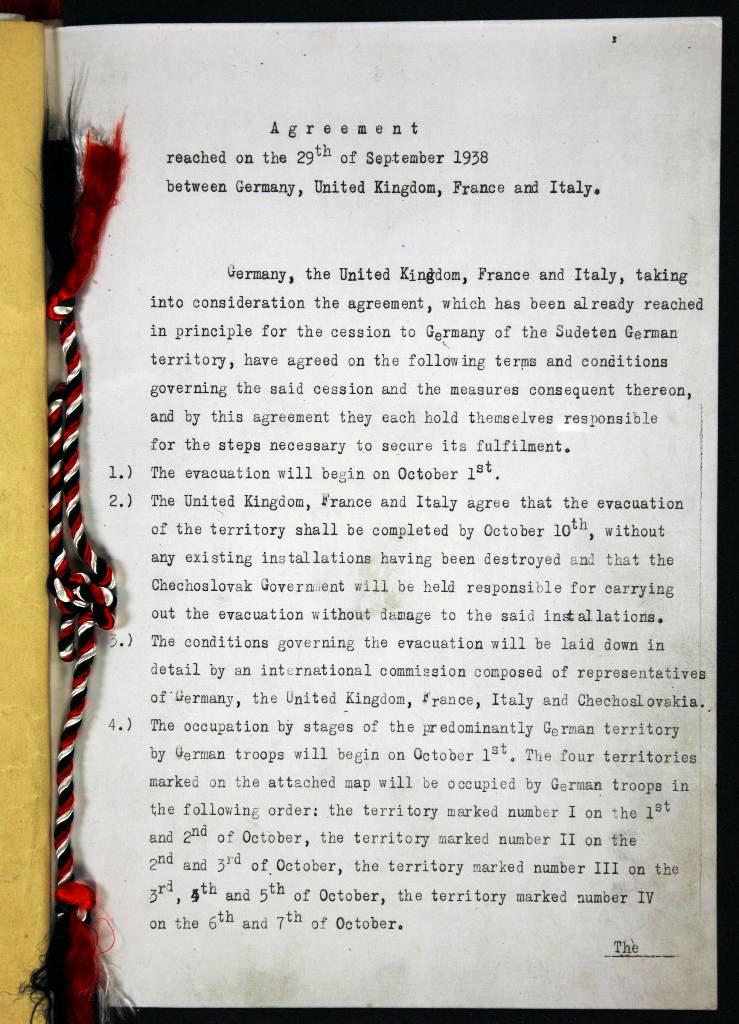 The opening of the text of the Munich Agreement. Catalogue reference: FO 93/1/220A.

As the map at the top of this post 1 shows, Czechoslovakia was a multi-ethnic country. The colouring on the map reflects the distribution of national or linguistic groups. Areas with a Czech majority are coloured beige, Slovak areas are pink and German areas blue. Yellow, orange and mauve indicate predominantly Hungarian, Ukrainian and Polish areas respectively.

The British Prime Minister, Neville Chamberlain, sought to avoid a war with Germany through a policy of appeasement. In mid-September, the British and French governments demanded of the Czechoslovak President, Edvard Beneš, that those parts of Czechoslovakia in which ethnic Germans made up more than half of the population should be ceded to Germany. Politically isolated, Beneš was forced to capitulate. Hitler then pressed further demands, including the breakup of Czechoslovakia and the immediate annexation of the whole of Sudetenland. 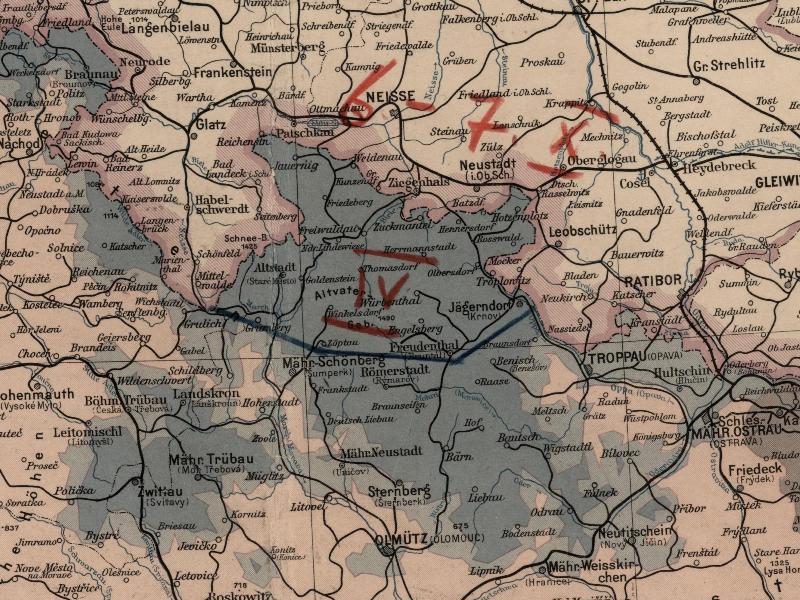 Hitler’s plan was for German troops to enter this portion of Sudetenland between 6 and 7 October 1938.

Following further demands and negotiations, the matter culminated in Munich on 29 September at a meeting between Chamberlain, Hitler, and the Italian and French Prime Ministers, Benito Mussolini and Édouard Daladier. The Czechoslovakian leadership was excluded.

The map was given to Chamberlain by Hitler at Munich. It is annotated with dark blue lines to mark the four areas that Germany intended to absorb. These areas are numbered and dated with the days when the German army was due to occupy them.

Signature page of the Munich Agreement.

In terms of the Munich Agreement, the four leaders agreed that German troops would take control of the four areas and other ‘territory of predominantly German character’ between 1 and 10 October. 2 The agreement also provided for the setting up of an international commission to carry out a plebiscite in areas yet to be specified. The final clause of the treaty states that the Czechoslovak government would release German Sudeten political prisoners and others serving in its army and police. 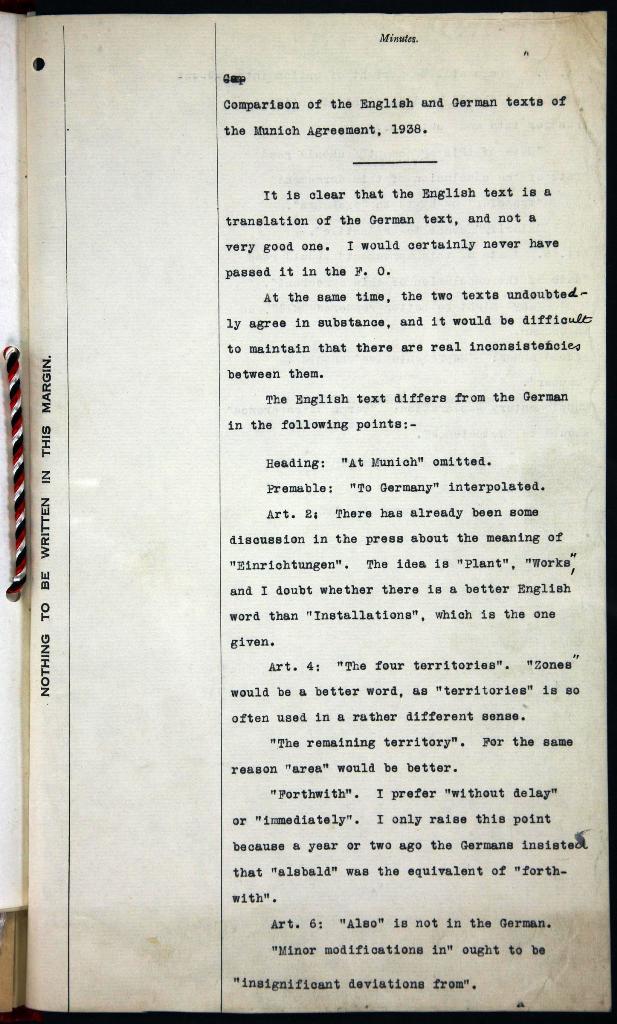 A minute discussing the precise meanings of some of the terms in the text is filed with the agreement.

An authenticated photographic copy of the agreement 3 signed by Hitler, Chamberlain, Daladier and Mussolini is held at The National Archives. The file which holds the agreement incorporates some additional material, including a note interpreting the meaning of particular terms used in the German version.

On Friday 30 September, Chamberlain signed an Anglo-German agreement of co-operation with Hitler. He returned immediately to London, apparently convinced that he had achieved ‘peace for our time’, explaining matters to the Cabinet at its meeting during the evening of the same day. 4 Chamberlain also had the Cabinet Secretary, Sir Edward Bridges, circulate a memorandum explaining how the terms of the Munich agreement differed from Hitler’s earlier demands expressed in his ‘Godesberg Memorandum’ of 23 September. 5 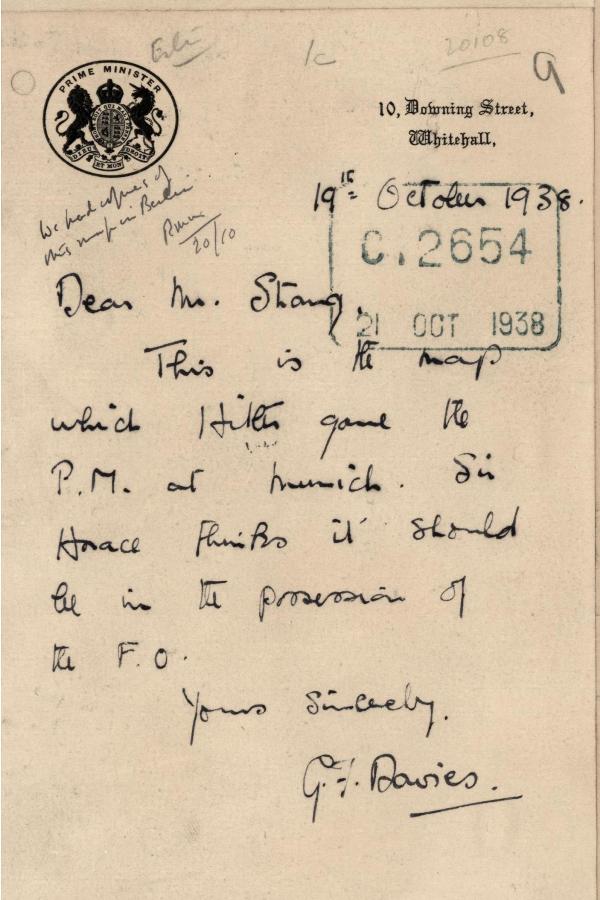 This letter, which attached to the map, explains its origins and how it came to be added to the Foreign Office’s map collection.

At the suggestion of Sir Horace Wilson, the head of the British Civil Service, the map that Chamberlain had received was added to the Foreign Office’s map collection. 6

Chamberlain’s prediction of a lasting peace could not have been less accurate. The Munich Agreement preceded the breakup and invasion of Czechoslovakia by Germany in March 1939. Following the subsequent invasion of Poland in September 1939, Britain and France declared war on Germany.

The Munich Agreement has been interpreted as a major failure of the policy of appeasement, which encouraged further aggressive actions by Hitler. It has also been argued that the postponement of war with Germany gave the British government another year to build up its armed forces.