A rough deal for Captain Kidd

In his ground-breaking postmodern collection, ‘A Universal History of Infamy’, Jorge Luis Borges deals with an assortment of historic villains. He condenses their careers into five or six short episodes. Along with Billy the Kid, he includes the female Chinese pirate, Ching Shih. But Borges could have applied his episodic yet seamless melding of fact and fiction to the life of William Kidd. He is, after all, equally prominent in the pantheon of bygone desperados.

The National Archives’ online catalogue isn’t very forthcoming on Kidd. However, a reading of Robert C Ritchie’s ‘Captain Kidd and the War against the Pirates’ (Cambridge, Mass., 1986) shows that a number of records from the Colonial Office and High Court of Admiralty illuminate key episodes in Kidd’s career.

Kidd’s early history is somewhat obscure. He was perhaps born in Greenock, west of Glasgow, around 1645, but that is not certain. We know that he was a privateer in the Caribbean during the Nine Years War. He took part in Admiral Codrington’s raid on the French colonial island of Marie-Galante. By 1695, Kidd was in New York, married to a wealthy widow, Sarah Oort. On the other hand, documents at The National Archives shed much light on the six years between Kidd’s fateful decision to leave New York for London in 1695 and his execution in 1701. 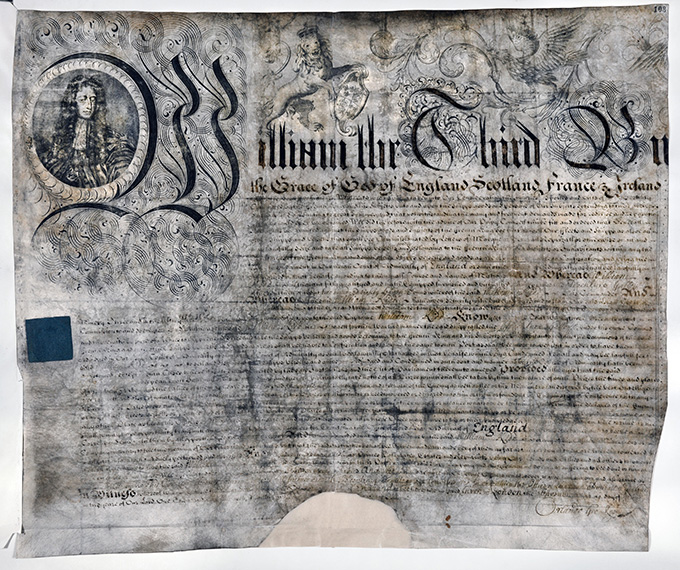 In 1695, Kidd concocted a plan to travel to London to acquire a royal commission as a privateer. He intended to capture pirate ships which preyed on the rich Mughal convoys travelling between India and the Red Sea.

Accompanied by a Scot, Robert Livingstone, who moved in New York political circles, Kidd arrived in London in 1695. They met the prominent Whig, Richard Coote, Earl of Bellomont, new governor of New York. Bellomont became Kidd’s chief patron in a Whig syndicate to share the profits from his expedition. They persuaded King William III to grant Kidd a commission to apprehend pirates and to seize French ships.

Kidd acquired the Adventure Galley, a hybrid ship powered by sail or oar, and armed with 34 cannon. It was ideal for hunting down buccaneers. Early in 1698 The Galley sailed for New York to complete its crew and then to the Indian Ocean. Here pirates preyed on the rich Mughal convoys travelling between India and the Red Sea. Kidd arrived at Madagascar early in 1697, but failed to take any prizes. The crew became rebellious forcing Kidd to assert his authority. He killed a gunner, William Moore, by breaking his skull with a bucket. 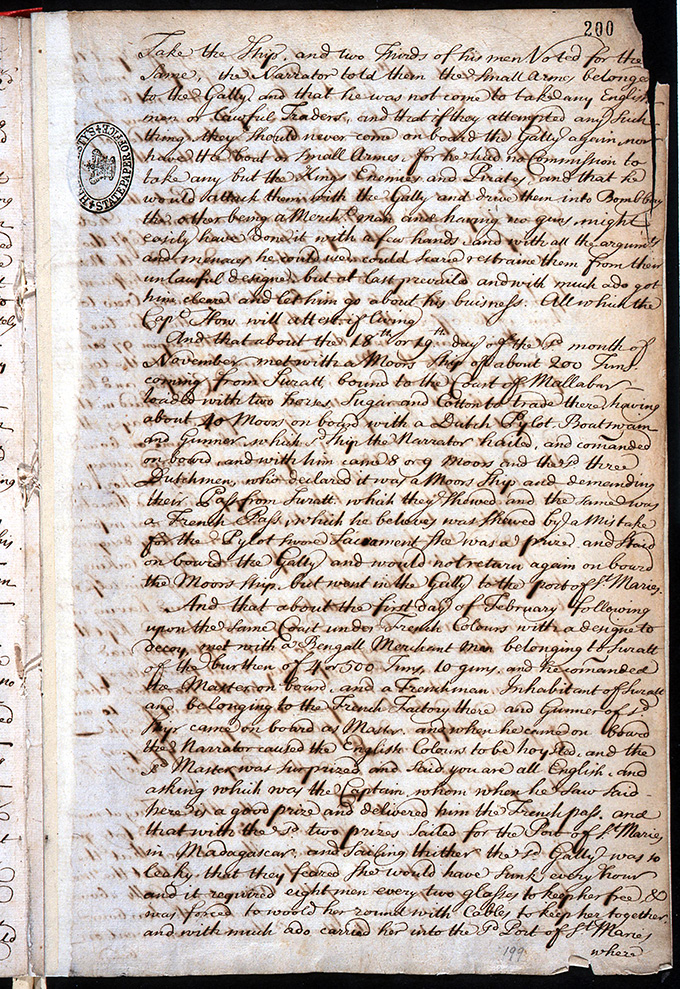 Captain Kidd’s account of his capture of the Quedah Merchant. It was handed to Lord Bellomont on Kidd’s return to New York. Catalogue ref: CO 5/860

Increasingly desperate, Kidd turned to what was really piracy. First he captured a Dutch-owned ship, the Roupparelle, tricking its captain, Michael Dickers, by flying French colours. Dickers duly produced a ‘French pass’, showing that Roupparelle was at least nominally a French ship. This gave Kidd some legal justification for his actions.

Such a meagre prize was insufficient to satisfy Kidd and his crew for long, or, for that matter, his patrons in London. His big chance came when Adventure Galley crossed the path of the unescorted Quedah Merchant, returning to Surat from Bengal. She was carrying a rich cargo of fabrics, opium and sugar. On 30th January 1698, Kidd detained the ship, again using the ploy of flying French colours.

The Quedah Merchant failed to offer resistance, but Kidd had made a fatal error. A prominent politician at the Mughal court owned much of the cargo. The Emperor, Aurangzeb, was outraged by the loss and demanded compensation from the East India Company. In 1698, Parliament passed the Piracy Act, showing an increased determination to stamp out robbery on the seas. By the time Kidd returned to New York via the West Indies, he was a wanted man.

Kidd got in touch with Bellomont through a lawyer. He handed over evidence, including a statement and the ‘French passes’. This was a mistake. Bellomont, now anxious to distance himself from the project, had Kidd arrested and transported to London. He spent 1700 incarcerated in Newgate Prison before his trial at the Old Bailey on 8th May 1701.

Kidd defended himself against charges of murder and piracy. He pinned his hopes on the French passes, but they were nowhere to be found. Presumably, his opponents had concealed them. Researchers found the documents a few hundred years later in a Colonial Office volume at The National Archives. 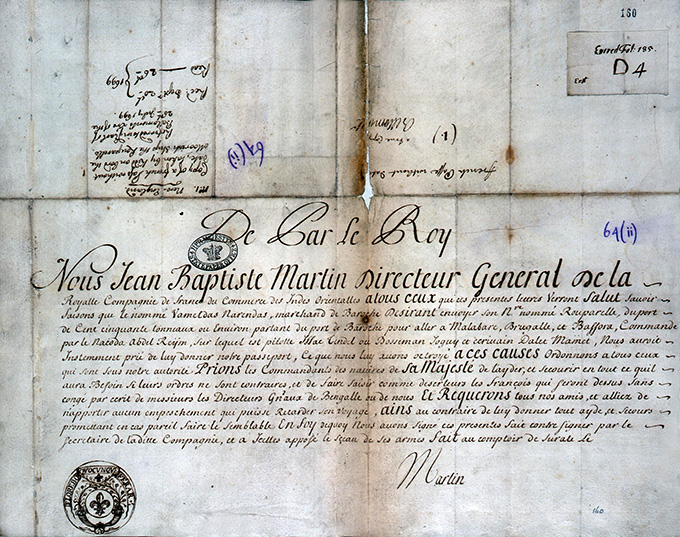 The ‘French pass’ given to Kidd by the captain of the Rouperelle. Catalogue ref: CO 5/860

In any case, Kidd faced a rigged trial and made the journey to execution dock in Wapping on 28th May. He arrived drunk to deliver a defiant speech. Even Kidd’s hanging went wrong, as the rope snapped, and he died at the second attempt. It’s tempting to think that he took that fall for his wealthy backers.