Set cookie preferences
Home > Blog > On the hook: hanging artworks in our repositories

On the hook: hanging artworks in our repositories

In March 2016, The National Archives installed three double-sided bays of mesh-panelled, mobile art racking in one of our repositories so that framed artworks – and other flat, large-format items in the collection – could be hung vertically. Up to then, large, flat items including artworks had to be stored in plan chests or, if too large for these, on the large shelving or in the oversize storage areas.

This is exactly what happened to 295 original publicity artworks accessioned which we accessioned in 2009 from National Savings and Investments. These were commissioned by the Post Office Savings Bank and National Savings between 1900 and 1986 and included works by well-known artists of the time. Due to the large number of artworks and the limited amount of large-format shelving space available back in 2009, the Collection Care Department had to remove the original frames, window mounts, backboards and glass from the artworks. As each piece was de-framed, the details were recorded on a database for future reference. The artworks were then housed in lightweight protective folders and stored flat in stacks of up to eight artworks on the large shelving. 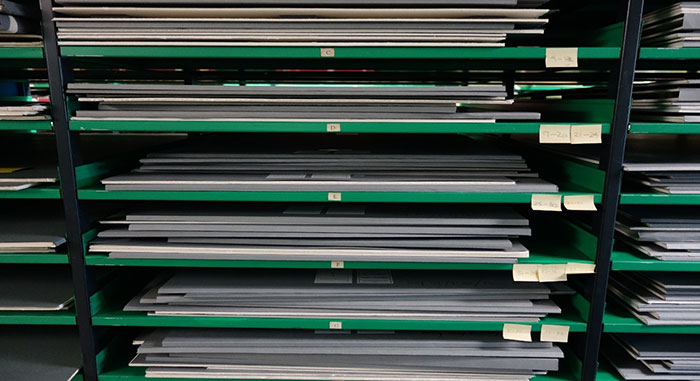 Housed artworks on the large shelving

This solution was the best compromise at the time, but it was not ideal for number of reasons. The removal and subsequent disposal of the frames and the other original material meant that a significant part of the original object was lost. A large amount of staff time was used in removing the artworks from their frames, treating any damage, making the folders and securing the artworks within them. Because the artworks are stored stacked on top of each other on the shelves, it can be awkward to retrieve and handle them.

Early in 2018, another four Post Office Savings Department original publicity artworks were accessioned by The National Archives. Our Collection Care department now had a great opportunity to use the mobile art racking to store these artworks.  However, before going ahead, we had to consider these factors to ensure it was the best method of storage:

After taking these factors into account, all four artworks were considered suitable for hanging on storage hooks in their original framed format. 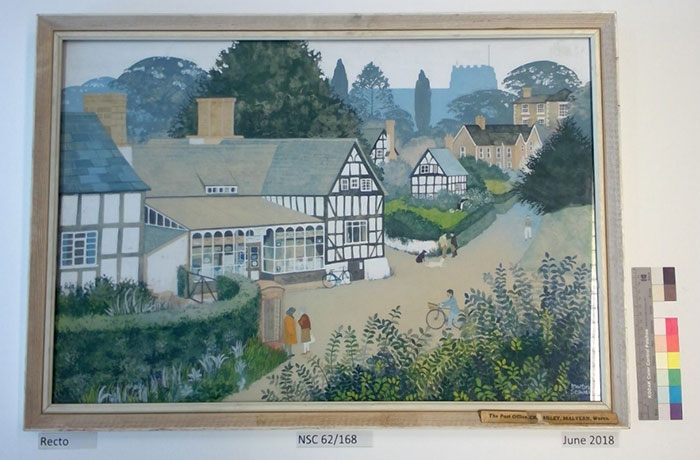 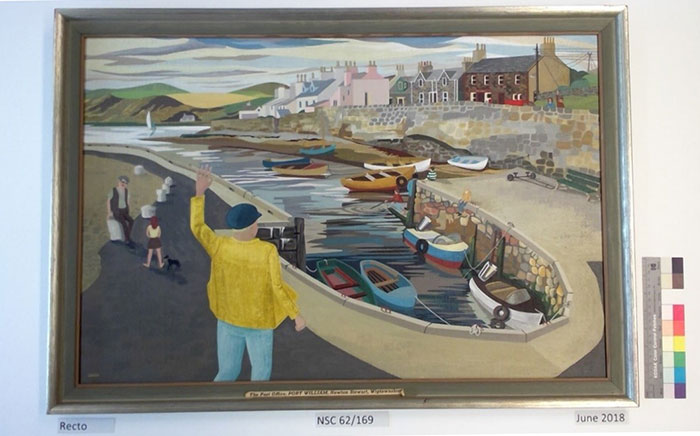 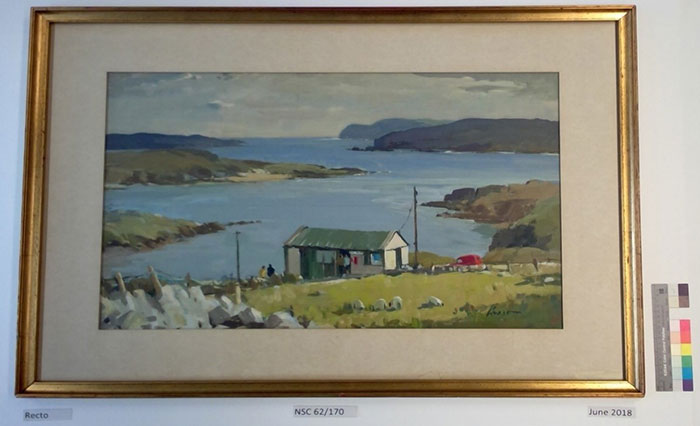 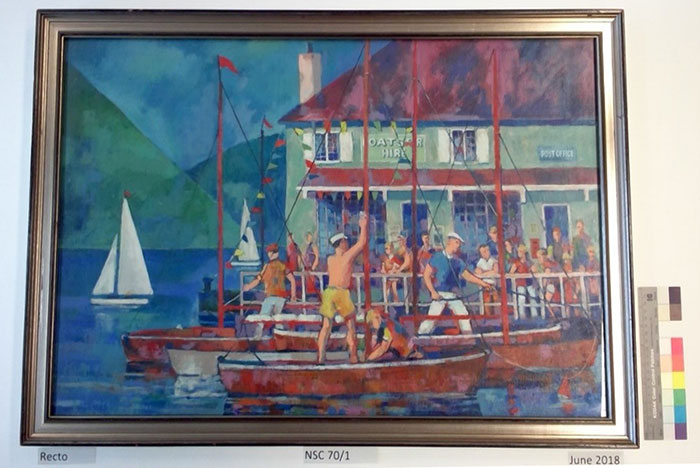 Preparation of the artworks for hanging

To prolong the life of the artworks, some of the acidic framing materials, such as window mounts and back boards, had to be replaced with archival alternatives.  We also replaced the heavy glass with museum-grade acrylic sheeting of the same 2mm thickness: a much lighter and safer alternative. Where back boards were replaced, all original artists’ labels were retained and pasted to the new back boards.

The bottom of one frame was damaged as it had clearly been dropped at some point in the past! The back of this frame was braced with angle plates, splits in the wood repaired with wood glue and a small area of lost wood replaced with wood filler. To allow the artworks to be hung on the racking, two mirror plates were screwed to the back of each frame. 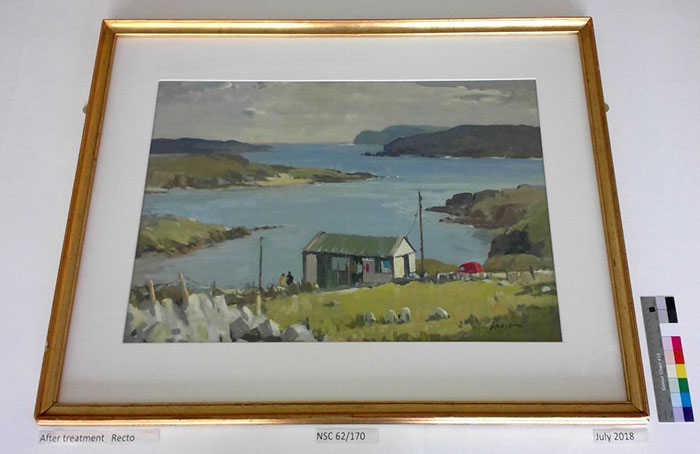 NSC 62/170 after treatment with repaired and braced frame, new window mount and backboard, glass replaced with acrylic sheet and mirror plates attached to back of artwork.

Housing and hanging of artworks

To minimise any damage from dust, dirt and light while hanging on the racking, Collection Care designed a simple, easy-to-make yet effective cover for the four artworks (and others in future), to fully protect them from these hazards and from any accidental damage during production to users. It was decided to make the covers from 1.7mm thick archival fluted board as this material is strong yet lightweight, and offers a degree of innate padding due to its corrugated construction.

The design also allows for a colour image of the artwork and a reference label to be pasted to the front of the cover. 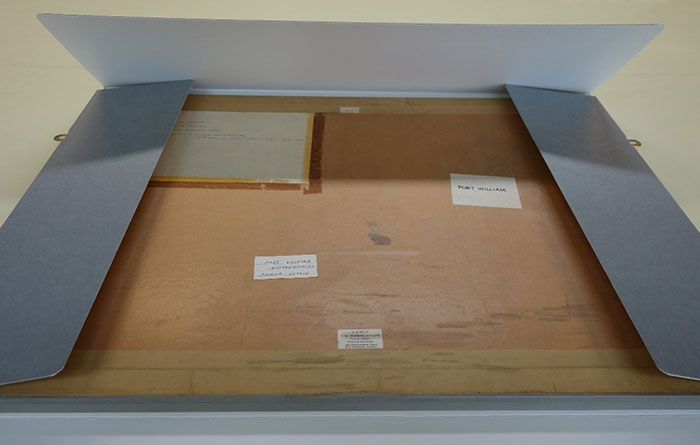 NSC 62/169 face down in fluted board cover before closing. Slits have been cut into each side to allow part of the mirror plates to protrude for hanging with storage hooks. 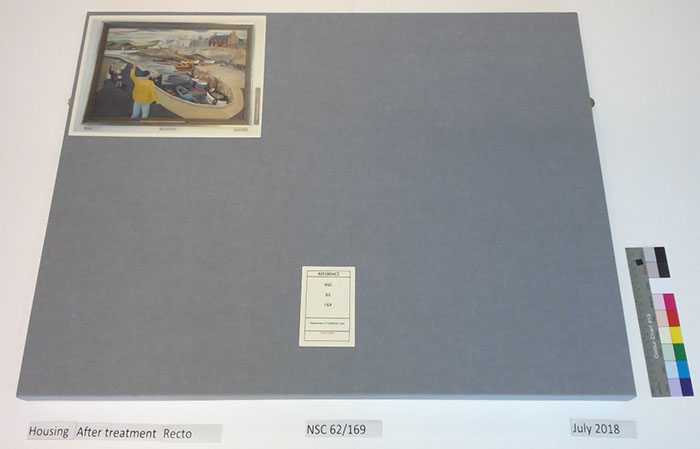 NSC 62/169 in its new cover with colour image and reference label.

Once completed, the artworks were hung on the mobile art racking with 40mm steel, s-shaped storage hooks. In the future, Collection Care will select other suitable artworks for storage on the racking: for example, framed artworks that have returned from external loans. 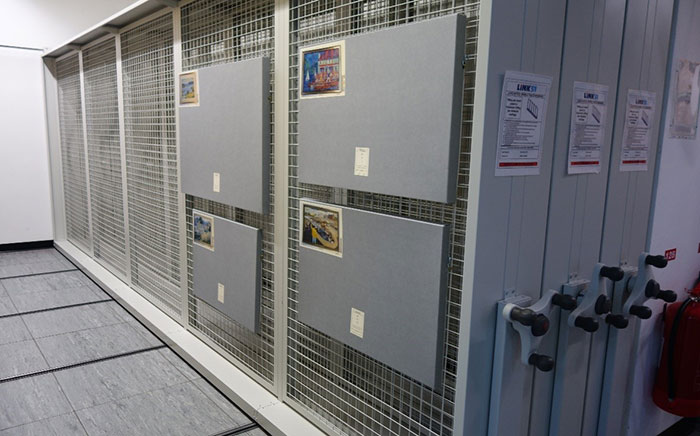 The four artworks proudly hanging in their new home