My First World War Tommy was not in the army, or any of the armed services, but he was called Tommy, and he died for his country. His name was Thomas Cross, and I know a great deal about his death, but very little about his life, except that he was my great-great grandfather. He has no birth certificate, because he was born in Ireland before the start of civil registration there, and although the birth certificates of his children give the date and place of his marriage to my great-great-grandmother, there is no trace of that in Irish civil registration either. He only appears in one census, 1911, because he was a merchant seaman, and was away at sea for all the others. 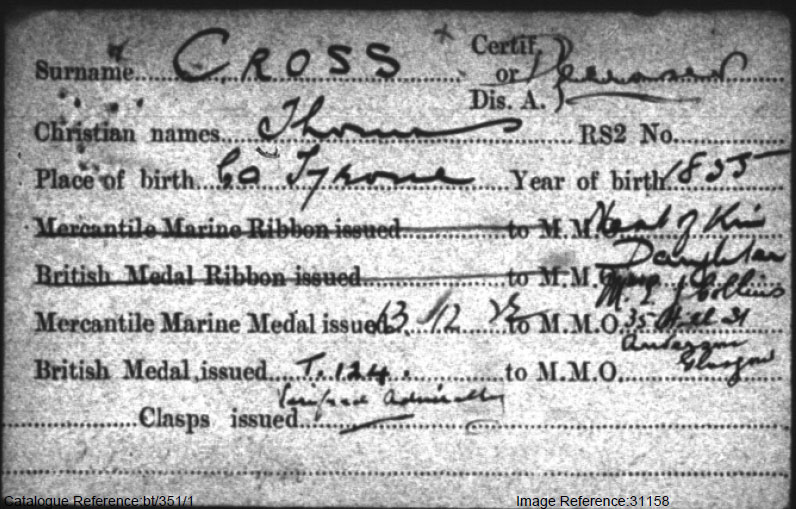 Like many other merchant seamen he was caught up in the war, and when he died in 1917 he was around 52 years old, older than most men in the fighting forces. His ship, the Ermine, had been commandeered by the Royal Navy as a Fleet Messenger, and sank in August 1917.

He left a widow, my great-great grandmother Jane, and it was the second time she had been widowed. Her first husband was a soldier in the East Kent Regiment (the Buffs), and she had followed his regiment as it moved back and forth between Ireland and England. When he died in Canterbury in 1878 she was left with four young children, but somehow made her way back home to Ireland where she married Tommy in the following year. The family then settled in Glasgow, where she had four more children, two of whom died in infancy.

The Ermine was a steamer carrying passengers and cattle between Dublin and Glasgow in peace time, but when war broke out she was used to transport troops to France, and then redeployed to the Mediterranean in 1915 where she is said to have carried about 200,000 military personnel and 3,000 horses into Salonika. When she sank, in the early hours of 2 August 1917, she was sailing through a channel that had been swept for mines on all but one of the previous 17 days, but it was a clear night with a full moon, so she was highly visible. Many of the crew and passengers were asleep when there was an explosion on the starboard side, and below the water line. It was described as ‘small’ by one witness, but was violent enough to throw one crewman over the rail and into the sea. Several witnesses reported hearing a loud rushing of air, and it transpired that the forward bulkhead of the boiler room had been badly damaged. The ship sank within minutes, so it is remarkable that as many as 60 people survived, given that most would have been asleep in their cabins. However, 16 crew and three passengers were missing, and the bodies of a further four crew members and one passenger were recovered. They were buried in the Mikra British Cemetery at Kalamaria. 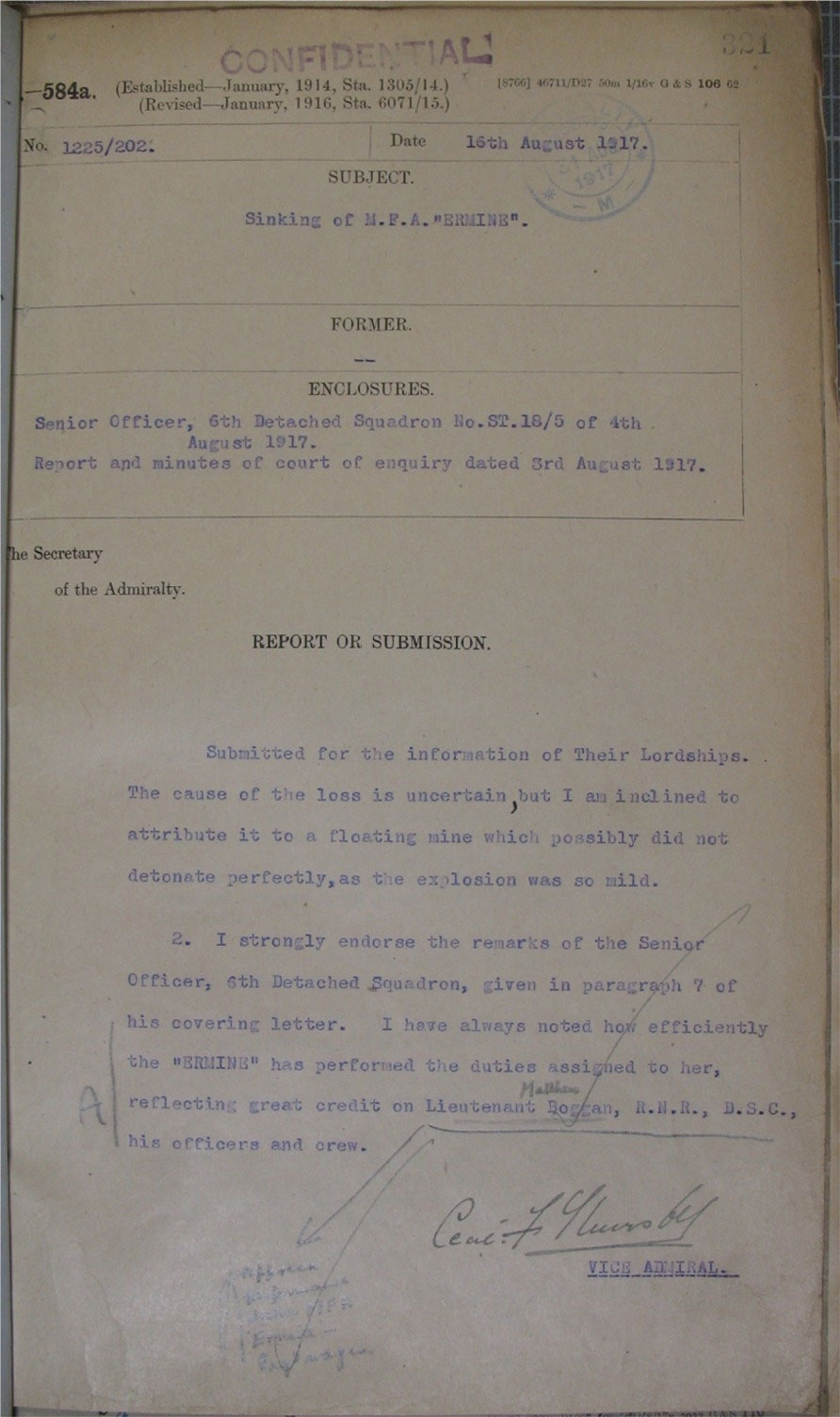 The initial impression was that the explosion was caused by a torpedo, but the inquiry into the sinking could not reach a conclusion as to whether it had been a mine or a torpedo, as none of the men on duty in the engine room had survived. It did conclude that the ship was evacuated quickly and efficiently and that no-one could be held responsible for the tragedy.

Tommy was among those missing, presumed drowned, whose names are recorded on the Naval War Memorial at Plymouth Hoe. He also has three death certificates; one each in the maritime and the Royal Navy war deaths held by the General Register Office for England and Wales, and another in the records of deaths at sea, held by the Registrar General for Scotland. The only official record of his merchant navy service is his medal card, showing his next of kin as Mrs H Collins, my great grandmother, because his wife did not outlive him by very long. According to one of his granddaughters, who is still alive, poor Jane could not take it in when she was told of his death. More than once the family found her wandering in her nightdress down to the corner of the street, to see if her Tommy was coming home. Her death certificate says she died of heart failure; I think it failed because it was broken.