The Reading Cyclist or the Cycling Reader 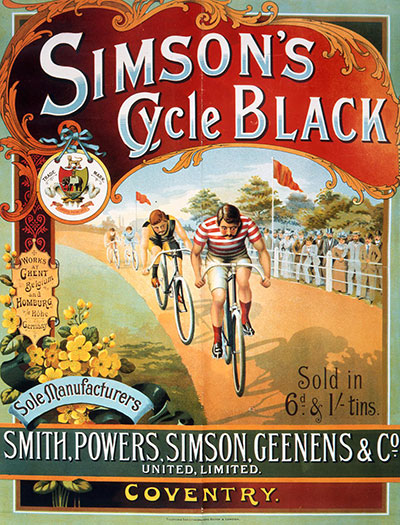 I virtually come from a cycling dynasty. My grandfather was a keen member of the Cyclists Touring Club  and undertook some amazing cycle tours of the Alps all carefully documented in notebooks (unfortunately written in Pitman shorthand, so accessible only to my sister who learnt useful skills at school rather than how to parse a verb or declaim Lear’s storm speech from Act III Scene ii). We have recently acquired a little book on the shelves of the bookshop, a reprint of  a gem from 1923, The Modern Cyclist, and I often think of my grandfather when I see it. Alongside advice on choosing and maintaining your bicycle, are cycle routes in Britain and Northern France outlined for the cycle tourist. Should you fancy a wee spin from Dalloway to Dumfries this provides instruction on which trains to bring your bike up on and the best stages for the 264 miles.

During the 1930s when my father’s family took holidays in the Welsh mountains or at the seaside, the rest of the family would be packed off by train with granddad following on his trusty Raleigh. Thinking nothing of cycling hundreds of miles and never stooping to lycra, he is my hero. My father courted my mother on a bicycle, and as a family we never had a car until my sister, the third child, rendered stacking the offspring on the crossbar an impractical mode of transport. Today my brother is a triathlete competing regularly in Mountains to The Sea and other hair-raising New Zealand cycle races (yes I know you’d never know it from looking at me, I have my mother’s ankles and my father’s cynicism, he got dad’s build and mum’s nature, an arguably more attractive combination, but hey, life is a genetic lottery). That is, he has ridden until recently; at the moment he is laid low with a shattered knee, victim of a half-wit in a van turning right over the top of him. Still, wonders of modern medicine and all that, he hopes to be back in the saddle in the fullness of time and is at the moment lying on the sofa watching the Tour de France and scribbling on his cast. For myself the spirit is willing but, as so sadly is often the case, the flesh is weak. I am a fair-weather cyclist. I cycle to work, but only in summer. As a spectacle wearer the misting up of the rain-spattered glasses makes winter cycling a life threatening occupation only rendered more perilous by early sunset. I own a huge collection of bike lights, 98% of which can be guaranteed to have a flat battery as soon as you need one to to cycle home in the dark.

Anyway as part of his convalescent reading programme I have sent my brother a copy of Great British Cycling. This fascinating tome is perfect for the keen cyclist or sofa-bound enthusiast de tour. It tracks 150 years of British cycling history, from the first documented cycle race held in Paris in 1868 (and won by a Brit), through to Sir Wiggo CBE, National Hero. For those fascinated by the tools and technology, The History of Cycling in 50 Bikes by Tom Ambrose has pictures and background on bicycles, from the primitive wooden two-wheelers, through to the high tech machines of today, some of which can cost as much as a car (and probably go faster). I myself favour Lady Cycling, a facsimile reprint of a little booklet produced in the 1890s and chock full of useful advice for bikers of the gentler (or indeed either) sex. Timeless advice on consideration and caution given as ‘it ought to be the exception, not the rule, to see a bad rider in the present day’ is often still relevant. And of course one does need to know whether to leave your corset off when riding…

Of course if you are not a cyclist and are thrown back on public transport this too can have (or perhaps sadly did have) it charms. A delightful read recently acquired in the shop is Three Men and A Bradshaw, the holiday journals of John Freeman and his brothers from the 1870s. Armed with their Bradshaw’s these siblings took off on their annual hols discovering much that was charming, quirky or irritating about British railway travel, and documenting and illustrating their journeys so we can share their story. This is a charming and often hilarious read not only for railway buffs but for any student of human nature.

And finally we are getting to that time when planning ahead can lead you into the uncharted waters of next year. Time to get your 2016 diary then. Whether you are planning a railway holiday or not, Bradshaw’s Diary is a perfect place to store those important appointments nestled amid attractive old railways advertisements and interesting anecdotes from the golden age of rail that time blissfully before overcrowding, leaves on the line and the wrong kind of snow.