Leprosy – now known as Hansen’s disease in order to remove the stigma with which it has often been linked – has a long and complicated history, from the ancient world to the present day, and across much of the world 1. The disease, which is itself extremely complicated and comprised of several strains, has historically presented in different ways and over different timescales, from benign cases (sometimes not outwardly visible) through to extremely severe manifestations, and has been subject to many different misconceptions over the years. The popular misconception – the image of the medieval leper, shunned by society and forced to live in rigidly policed and controlled isolation in order to save the general populus – may be a familiar story, but in reality individual reactions to the afflicted could be complex and often contradictory. In this blog I want to look at some of the ways in which leprosy features in our medieval collections.

Prior to the mid-14th century, and the devastating outbreak of plague known as the Black Death, the image of the leper was not always one of revulsion. The period between the Norman conquest and the Black Death saw hundreds of leprosaria (leper-houses) founded across the country, in line with a swathe of new religious foundations and hospitals. Leprosaria, much like hospitals, were often founded on the outskirts of towns and cities, but this was largely to reap the benefits of available space outside of congested urban centres, rather than to enforce isolation.

Will of Joan Frowyk, Widow 16 May 1500 ‘Item I bequeath to any lazour, be it man or woman being at time of my decease in the lazerhouse[s] of St Giles beside Holborn, Newenton [Newington] Green, the Loke beyond St George’s bar, Hammersmith and Knightsbridge for to pray for my soul’. Catalogue ref: PROB 11/12/74

As well as the foundation of hospitals and leprosaria, the gifting of pious bequests to these houses was a popular form of charity, and features regularly in wills even into the 16th century, when fears of infection had greatly increased. The will of Joan Frowyk, for example, included bequests to each of the London ‘lazerhouses’ (another term for leprosaria) including St Giles by Holborn and the Loke in Southwark (a later incarnation of which would become the first hospital in London to treat venereal disease) alongside houses in Hammersmith and Knightsbridge, for lepers to pray for Joan’s soul. 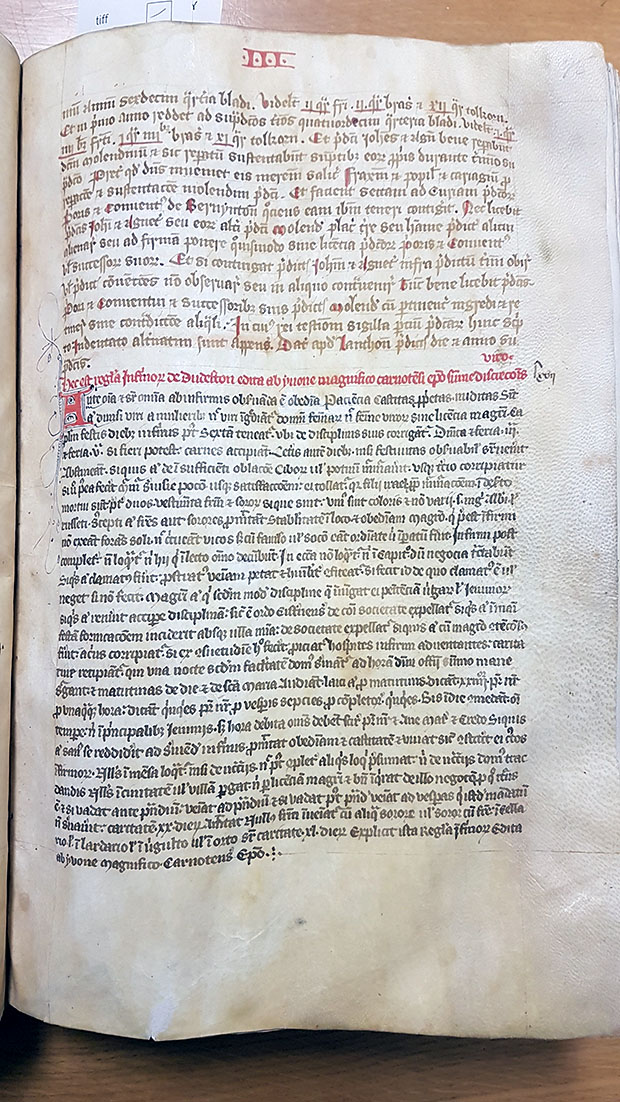 Regulations for an institution run by Llanthony Priory, Gloucester – Patients of opposite sex who associated without consent of the master received 40 days hard penitence, and fornication brought the punishment of automatic expulsion. Catalogue ref: C 115/77

Strict rules were sometimes imposed on leprosaria, in a similar vein to monastic foundations hospitals and almshouses, in order to ensure a contemplative life among the residents. A primary concern was that of chastity among the residents. While some leprosaria had different accommodation established for men and women, others (such as those administered by Llanthony priory) required vigilance amongst the staff and residents, and had strict punishments for those who disobeyed the regulations.

Subsidence of leprosy in England

Robert Waldshaf and Agnes his wife, who are lepers, state that the Hospital of St Giles at Boughton, outside Chester, which was founded by Earl Ranulph and is now in the King’s hand, was founded for lepers alone, but is now charged with other people who are not sick. [1328-1330] Catalogue ref: SC 8/296/14783

By the 14th century, some foundations were struggling to fill their numbers with legitimate sufferers, possibly as the number of conditions labelled as ‘leprous’ (and therefore justifying a position within a leprosaria) decreased in the face of new medical knowledge and diagnostic criteria. At the Hospital of St Giles at Boughton for example, two married lepers, Robert and Agnes Waldshaf, petitioned the crown in c.1328 to complain that the hospital, having been founded ‘for lepers alone…is now charged with other people who are not sick’, and asked ‘that they might be served with what he [the King] granted them there’.

Lepers of the hospital of St Giles outside Holborn. The lepers request remedy as the current master of the hospital, the abbot of St Mary Graces has withdrawn the alms and hospitality that they are assigned and does not wish to receive further sick into the hospital to bring it up to its full total. [c.1399-c.1413] Catalogue ref: SC 8/324/E617B

That unaffected individuals wished to gain access to leprosaria shows that these houses were not the austere and controlled spaces imagined by later 19th-century writers and policymakers, but rather desirable spaces in which to live.

Mustardere v The Sheriffs of Norwich Action of trespass brought by John Folkard against the complainant for denouncing him as a leper. Catalogue ref: C 1/46/158

In the wake of the Black Death, however, fears of contagion and of leprosy became increasingly more stark. The 15th-century Chancery petition of William Mustardere, parson of the parish church in Sparham in Norfolk, illustrates the complex nature that fears might manifest themselves. Mustardere, claiming that one John Folkard, the son of a Norfolk alderman, was ‘greatly infect with the sickness of lepre’, had secretely advised him from the confessional on several occasions that ‘his sickness was contagious’, and that he should therefore depart and keep himself out of fellowship.

Whatever the parson’s motivation in suggesting this course of action, his recommendations were not well-received, with Folkard stating that he would regret ever making such a statement. Mustardere, in a final attempt to force Folkard’s hand,  decided to inform the rest of the parish community of John’s alleged sickness, at which point many of his servants ‘would no longer abide with him…seeing the said sickness show upon him so evidently [and] would not be accompanied with him’.

Did Folkard suffer a major deterioration in his condition, so that it was clearly visible to his servants in a way it hadn’t been before, or were they viewing him differently in response to Mustardere’s announcement 2. In either case, John’s kinsmen and friends in Norwich remained loyal to him, and helped him to take a case of trespass against William in the sheriff’s court, upon which William found himself held in prison, where he petitioned the Chancellor and outlined what had occurred in Sparham. 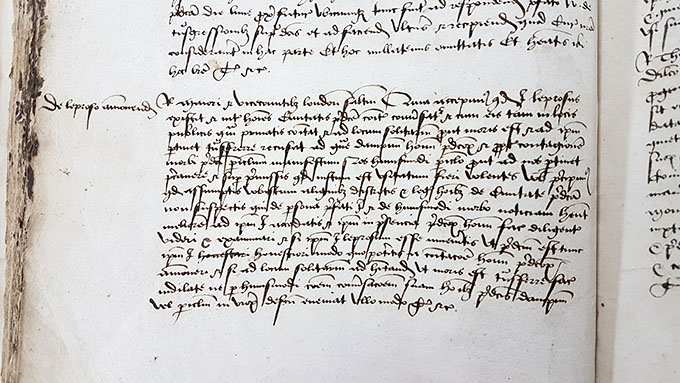 Mustadere’s case represents an example of local responses to leprosy, but what was the official response? Two examples from the records of the common law courts hint at both the fears within society following the Black Death, but also the practices of assessing suspected lepers. The full force of the common law was not often used in practice to remove lepers from society, but it was possible. The writ de leproso amovendo could lead to individuals being ejected from society, but we don’t often see it used in practice. One such example from 1420 shows the sheriff of Lincolnshire rebuked for failing to have carried out the assessment of a Boston mercer, John Louth, who (it was alleged):

‘commonly mingles with the men of the aforesaid town and communicates with them in public as well as private places and refuses to remove himself to a place of solitude, as is customary and as it behoves him to do, to the serious danger of the aforesaid men and their manifest peril on account of the contagious nature of the aforesaid disease’ 3.

Writ and return in the Recorda files of the King’s Bench, assessing John Hedon and his wife Alice, alleged lepers living in Lincoln. Catalogue ref: KB 145/6/24

A similar writ of May 1446 was issued to the mayor and sheriffs of Lincoln, to assess John Hedon and his wife Alice, who were allegedly living as lepers in the community, although John was declared to be free of the disease, while Alice could not be found. 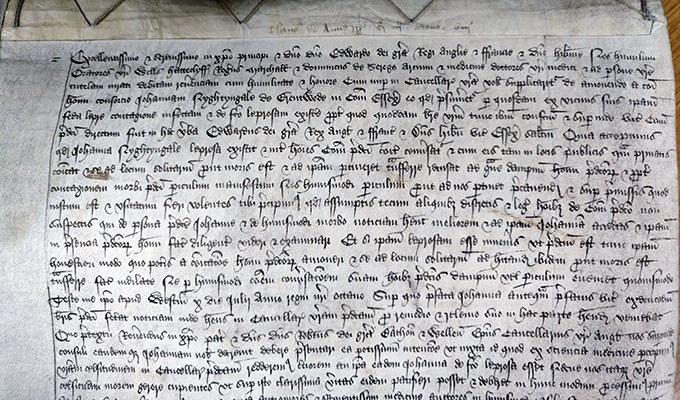 This raises interesting questions about how leprosy was assessed in the localities and by officials. The 1468 case of Joanna Nightingale from Brentwood in Essex sheds some light on this process. Joanna was to be assessed by the local sheriffs, and ordered to leave home in the case of a positive diagnosis, but before this could take place Joanna appeared in Chancery herself, asking for the case to be judged by the royal physicians. Having undergone a detailed examination, the physicians declared that she did not show enough of the 25 most-known characteristics ‘according to medical science’ (ex scientia medicinali) to be deemed leprous, and so she should be freed from suspicion.

Reactions and responses to leprosy and lepers in late medieval England could be complex, contradictory, and certainly were not universal. Fears of infection after 1348 could sit hand in hand with the care and reverence for the afflicted shown in pious bequests and leprosaria, with processes in place at both the local and national level to try and manage the care of those living with leprosy with respect.