Lady Jane Grey is perhaps the least known English queen of the sixteenth century and, at times, has been written off as an aberration, despite being monarch for nine days. When historians have turned their attention to her, it is usually to analyse the legal and political questions surrounding her short reign, her deposing and execution, as well as her faith.

Edward VI attempted to elevate Jane and remove his two half-sisters, Elizabeth and Mary, from the succession. Edward had his reasons for attempting to exclude Elizabeth and Mary. Beyond Mary’s staunch Catholicism, both were deemed illegitimate due to the annulment of Henry VIII’s marriages to Catherine of Aragon and Anne Boleyn respectively. Both women  were of half-blood; and there was a growing fear that they might seek to marry outside the kingdom, ‘which would then tende to the utter subversion of the common-welth of this our realme’.  1

A political crisis ensued when Mary outmanoeuvred Jane by declaring herself queen and securing the support of the leading nobles and politicians. Having been a resident in the Tower of London before her coronation, Jane quickly became a prisoner there, where she was ultimately executed in 1554. Once Mary consolidated her position as monarch and set in motion Jane’s execution, Jane became an afterthought.

Often lost within this story is any consideration of Jane herself. There are a few descriptions of Jane in diplomatic correspondence from the time and fewer surviving letters by her own hand. 2  This makes a short letter that Jane wrote to her guardian, Thomas, Baron Seymour of Sudeley, all the more important for the insights it gives us about the young woman.

Jane had been brought to Seymour’s household as a pawn in a larger scheme he concocted to undermine his brother, the Lord Protector, of whom he was extremely jealous. As part of his plan, Seymour persuaded Jane’s parents to allow him (for a fee) to take her into his household with the promise of securing a favourable marriage for her. One of the unintended consequences of this deal for Jane was the opportunity it afforded her to spend time with Queen Katherine Parr, Henry VIII’s last wife, whom Seymour married in 1547.

Katherine was a proponent of the new religion but she had also been influenced by humanist approaches to education, known as the New Learning in England, which advocated that girls should be given the chance to benefit from a classical education as well as boys . Katherine also doted on young Jane, who was precociously intelligent; naturally, she blossomed in the congenial atmosphere of the queen dowager’s court. It is uncertain what input Seymour had on Jane’s education, but he certainly did not oppose his wife’s ambitions for girls; Jane embarked on a programme of studies that included Latin, Greek and modern languages.

By the summer of 1548, Katherine was pregnant with Seymour’s child. The young Jane travelled to Sudeley Castle in Gloucestershire, which had been given to Seymour by Edward VI, as part of a large retinue of ladies in waiting. Katherine gave birth to Lady Mary Seymour on 30 August 1548 but suffered from puerpepal sepsis and died on 5 September 1548. 3  This threw the family into crisis and Seymour was grief-stricken – as was young Jane, who acted as chief mourner at Katherine’s funeral.

In the subsequent weeks, Jane briefly returned home to her parents and it was probably during this time that she wrote the letter to Seymour thanking him for his hospitality.  In her simple hand she expresses her appreciation to Seymour for the opportunities she received while in his household. 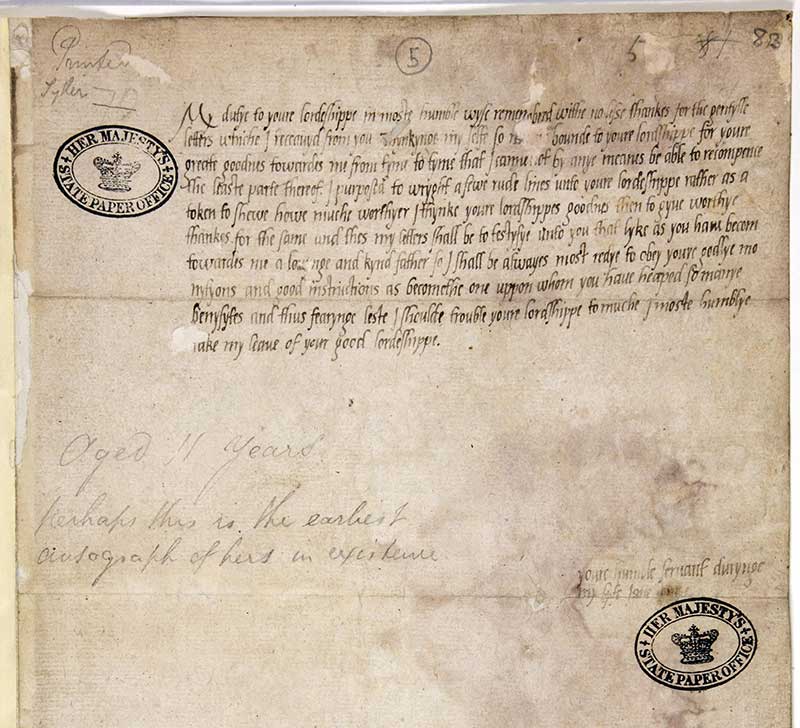 EXT 9/42: Letter from lady Jane Grey to the Lord Admiral, Lord Seymour, thanking him for his goodness to her

My dutye to youre lordeshippe in most humble wyse rememberd withe no lisse thankes for the gentylle letters which I receavyed from you Thynkynge my selfe so muche bounde to your lordshippe for youre greate goodnes towardes me from tyme to tyme that I cannenot by anye meanes be able to recompence the least parte thereof: I purposed to wryght a few rude lines unto youre lordshippe rather as a token to shewe howe muche worthyer I thynke youre lordshippes goodnes then to gyve worthye thankes for the same thes my letters shall be to testyfe unto you that lyke as you have becom towardes me a louynge [loving] and kynd father so I shall be alwayes most redye to obey your momysons and good instructions as becomethe one uppon whom you have heaped so manye benyfytes. and thus fearynge leste I shoulde trouble youre lordshippe to muche I moste humblye take my leave of your good lordshyppe

Jane was not an asset to be given up easily and Seymour quickly drew her back into his household: in the coming years she was to acquire an importance that she herself hardly expected.