Our Keeper’s Gallery currently features a display highlighting Newfoundland during the First World War. Newfoundland Colony was an English colony established in 1610 off the Atlantic coast of Canada. The colony comprised the island of Newfoundland and the coast of Labrador which was added in 1763. It was made a crown colony in 1854 and a dominion of the British Empire in 1907. In 1949 the Province of Newfoundland joined the Canadian Confederation.

At the time of the First World War Newfoundland had a population of around 240,000, with 30,000 living in the capital, St John’s. The dominion provided men for the army, navy, merchant navy and forestry corps. The people of Newfoundland also and dug deep into their pockets for the war effort. A Patriotic Fund to assist the families of men on active service raised $120,000, and $250,000 was raised for the Red Cross fund to provide ambulance and hospital facilities overseas. The St John’s Ambulance Cot Fund raised enough money to pay for over 300 beds in France and England for wounded Newfoundlanders and in Newfoundland a hospital for tuberculosis patients and a convalescent home were built. Money was also raised for the Belgian and French War Relief agencies. 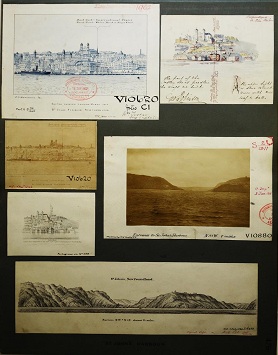 These sketches and photograph dated 1863 – 1911 are of St John’s Harbour, Newfoundland 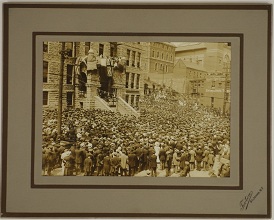 Mass meeting in Newfoundland held on the second anniversary of the start of the war in August 1916. Cat ref: CO 1069/294

This is a photograph of a mass meeting held on the second anniversary of the start of the war in August 1916. The meeting was in front of the court house in Water Street, St John’s, and the crowd were addressed by the Hon. J. R. Bennett, Colonial Secretary and Acting Prime Minister. 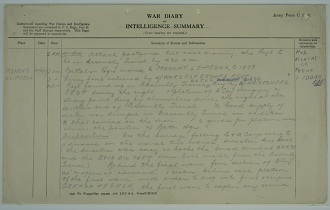 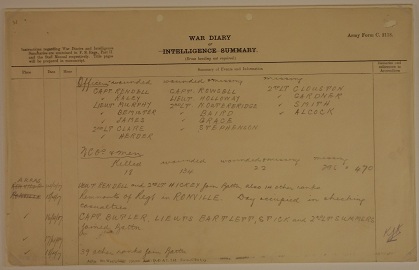 The Newfoundland regiment helped in the evacuation of Gallipoli in January 1916, and after a brief posting to Egypt a full battalion was sent to France in March 1916. On 14 April 1917 the battalion was ordered to occupy German trenches and a wood near the village of Monchy le Preux, 5 miles from Arras. The front German trench was taken, but a strong German force had concealed itself in the wood. Of the 611 officers and men who took part, 487 were either killed, wounded or missing. As a result of their bravery the regiment was awarded the prefix ‘Royal’ on 28 September 1917, becoming the Royal Newfoundland Regiment. Private Thomas Ricketts won the Victoria Cross on 14 October 1918 during the advance from Ledeghem in West Flanders. The Newfoundlander became the youngest army recipient of the VC fighting in a combatant role. 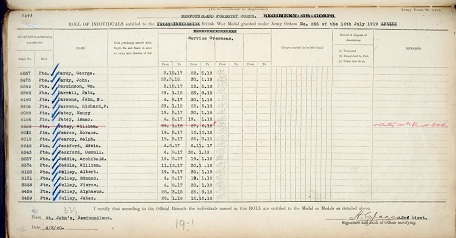 In 1917 Newfoundland lumberjacks were conscripted to work for the Forestry Commission in the United Kingdom to supply timber for the war effort. 498 foresters joined the Newfoundland Forestry Corps and were employed to cut down woodland on the Duke of Atholl’s estate in Perth, Scotland. The additional tonnage secured from home forests in 1917 and 1918 enabled the Government to reduce imports of timber, releasing at a time of great shipping shortage much needed space, which was freed up for the conveyance of increased munitions, food and supplies for the troops. The men of the Newfoundland Forestry Corps were awarded the British War Medal in recognition of their valuable war work. 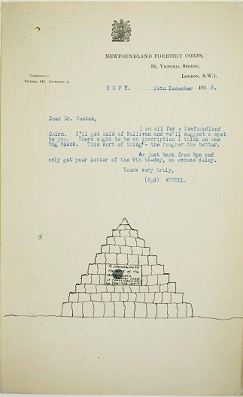 This letter dated 1918 is from the Duke of Atholl to Mayson Beeton, administrator of the Newfoundland Forestry Corps, granting approval for the erection of a cairn memorial to commemorate the work of the Newfoundland Forestry Corps. The centre of operations for the Corps was at the hillside forest of Craigvinean, at Dunkeld, in central Scotland. Mayson was the son of Isabella Beeton, the author of Mrs Beeton’s Book of Household Management. A log chute was created to transport the mature larch, pine and beech logs from the steep forest slopes to the river Tay, from whence they were transported downstream to the purpose-built saw mill.

The Newfoundland display will be in the Keeper’s Gallery until December 2015.

The Keeper’s Gallery is now offering free 30 minute highlights tours of the gallery. Click here for times and more information.