Join us to discuss seven centuries of Irish history 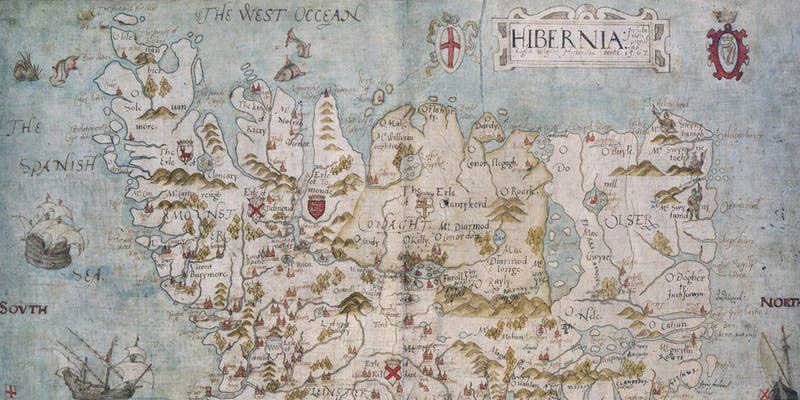 From 21 to 23 March 2019, we welcome historians of medieval and early modern Ireland to The National Archives to discuss their research on seven centuries of Irish history.  Seventeen speakers will present their ideas on the English administration in Ireland over three days, including three keynote addresses by eminent historians.

Professor Robin Frame will look back on a career thinking and writing about medieval Irish history. Professor Pat Palmer will discuss how the records in our collection often give fleeting glimpses of people who briefly appear and quickly disappear from the historical record. And Professor David Hayton will discuss how the wealth of records at The National Archives provides us with a clear understanding of Anglo-Irish government in the 18th century.

Between these talks, speakers will present on topics such as

We will also consider the assimilation and ostracism of people in Ireland as military conquest, religious change and economic shifts from southern to northern Europe brought massive change.

We have titled this symposium Dominus Hibernie / Rex Hiberniae, Lord of Ireland / King of Ireland, Tiarna na hÉireann /Rí na hÉireann. Henry II was granted the lordship and dominion of Ireland in 1169. In 1541, the Irish parliament elevated and recognised Henry VIII as king of Ireland (and therefore head of the Church of Ireland). In 1801, the Act of Union dissolved the Irish parliament. The administrative, legal, economic, public and private records created to govern Ireland during this period reflect English rule. Many native Irish accepted the English monarch as their sovereign ruler. Others, particularly at times of crisis, did not.

We hope to highlight the wealth of information contained within the Irish records in our collection, and also the complicated nature of English rule in Ireland, in an effort to celebrate this shared heritage. By bringing together experts on pre-modern Ireland, we aim to communicate current understanding of this complicated period of Irish history to the broadest possible audience.

Why are these records at The National Archives?

When researching and writing the history of pre-modern Ireland, historians rely heavily on the records created and used by the royal government in Dublin: many of these are held by The National Archives. Within them are details of invasion and conquest; resistance and rebellion; government policy and administration; land ownership and confiscation; the appointment and correspondence of officers of state; the introduction of the common law and the judiciary; ecclesiastical practice and confessional change; the emergence of parliament; as well as many documents relating to government revenue, trade and finance.

As the crown’s remit expanded and contracted over the centuries, officials created records giving detailed insights into their engagement with the native inhabitants of Ireland and their response to royal policy. Using these records, historians have written nuanced accounts of medieval and early modern Ireland.

Our records also give us the opportunity to look at the development of the royal government in Ireland over several centuries. By having historians of medieval and early modern Ireland discuss similar topics we aim to provide both speakers and the audience with an opportunity to share ideas and thoughts about how the English government in Ireland has been studied. Recent years have seen an upsurge in the publication of books, articles and blog posts on the centuries between Henry II’s assumption of the lordship of Ireland in 1169 and the forced closure of the Irish parliament in 1801. Before we embark on a new effort of archival discovery, it is useful to pause in order to reflect on current understanding.

With the destruction of the Public Record Office of Ireland in 1922, the collections at Kew took on even greater importance. Many of the records we hold are are clerical or bureaucratic copies of the records produced in Dublin and act as direct replacements for destroyed records. Others are working documents of the English administration in Ireland: they were written in Ireland and sent to Whitehall, or were drafted in London as part of the oversight royal officials enjoyed over Ireland.

The earliest records we hold relating to Ireland were produced during Henry II’s reign. Dating from 1170-1171, they are the costs for supplying Henry’s army in Ireland. Only 16 documents relating to Ireland survive from the first years of Henry’s reign. We can, however, see the English administration’s rapid expansion through the increase in correspondence. By John’s reign (1200-1217), hundreds of documents passed back and forth across the Irish Sea each year.

As government became more sophisticated, so did the necessary bureaucracy and the English models of administration – including the Chancery (king’s secretariat), Exchequer, and Treasury – became the model for government in Ireland. In the same way, as a parliament developed in England, so it did in Ireland. With English monarchs rarely visiting Ireland, Irish matters were brought to the monarch in London: as a result, the papers have survived at The National Archives.

The imposition of the Reformation brought great change to early modern Ireland. It also saw the introduction a new class of officials, while those who had traditionally governed Ireland – the Old English Catholics – were ostracised from power. These new officials were often English-born men or their Irish-born sons and they came to occupy the positions of power that previously had been in the gift of the crown to Catholic gentry and nobility. The massive disruption in people’s personal and professional lives brought about by the Reformation will be discussed at the symposium. 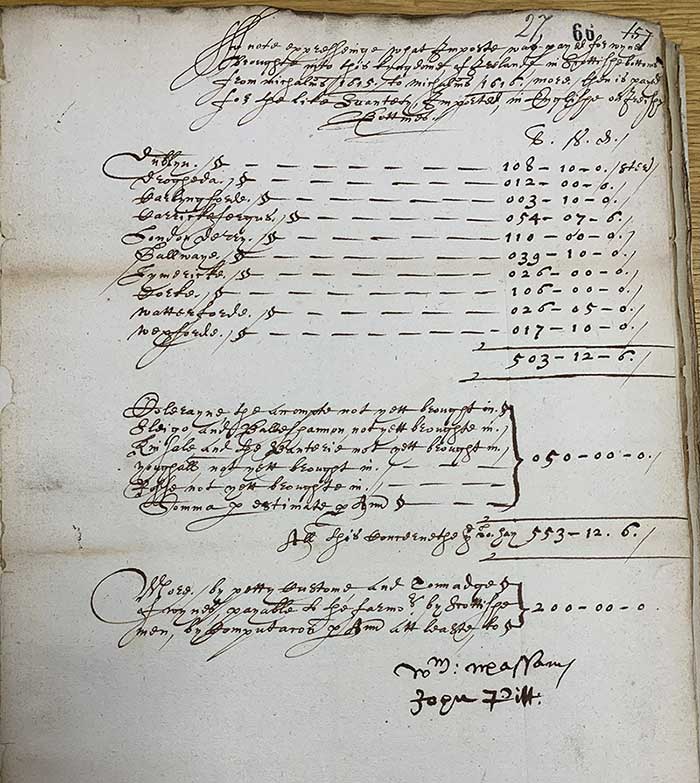 The most prominent records related to the Tudor and Stuart period are the State Papers Ireland, a series that was compiled in the 19th century by drawing together and chronologically sorting documents from numerous government departments including the State Papers Office, the English Chancery, and the Treasury of the Exchequer. The State Papers Ireland run from the beginning of Henry VIII’s reign in 1508 to the formation of the Home Office and Foreign Office in London in 1782 during George III’s reign.

The State Papers form the basis for many studies on early modern Ireland (and will underpin many talks at the symposium). However, they are not comprehensive and much more material sits around them but it is underused. To rectify this, in the coming years we will be undertaking a full search for Irish records, in particular those from the 15th to the 18th centuries, in order to uncover previously underused or forgotten records, or hopefully to discover unknown Irish material. The impetus for this work has been our partnership with Beyond 2022 and the attention it brings to Irish records across the world. Dominus Hibernie / Rex Hiberniae allows us to assess how historians are thinking and writing about pre-modern Ireland as Beyond 2022 begins. 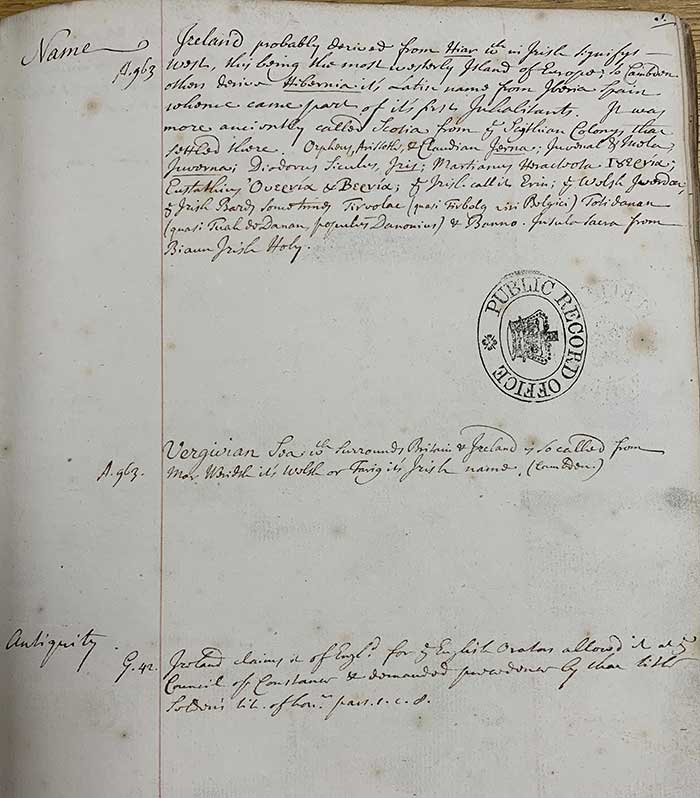 Join us for the symposium

As we embark on this effort to reassess the nature of the pre-modern Irish records at The National Archives, we are honoured that Adrian O’Neill, Irish ambassador to the United Kingdom will join us on at the symposium on 21 March. Ireland and England share a complicated past that deserves to be better understood. With the support of the British and Irish governments, we will continue to reassess the nature of English rule in Ireland as we uncover and make available the wealth of Irish documentary evidence in our collection.

Tickets are still available for the symposium, starting at £30: book your ticket now.