Those blog readers who’ve been to Kew recently will have noticed we’ve carried out a few changes to our museum.

You may not know this, but The National Archives and its predecessor, the Public Record Office, have had some form of museum to display our fantastic collection since the early 1900s and it is a really great resource to have. 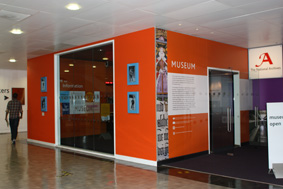 The museum was completely redesigned in 2008 and, while people really loved the content and displays, the space never really worked the way it was supposed to. So, after carrying out an internal review of the museum this year, we started a project to address the main issues identified: that the space was cold, dark, uninviting and often looked closed and there wasn’t any space or facilities for a large group, limiting our education department’s use of the space. All of these problems resulted in there being relatively little use of the museum, it was often empty and those who did pop in to take a look didn’t stay very long. 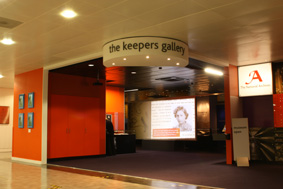 New entrance to The Keeper's Gallery...yes, we know about the apostrophe!

Our main aim with the project was to create a brighter, more inviting space that took account of the needs of the education department for use of the space, but to do this by making small adjustments to the space rather than scrapping it and starting again. We also changed the name of the space from ‘museum’ to The Keeper’s Gallery, which was chosen by the executive team from a selection of 40 staff suggestions.

The project ran for six months which included five weeks of closure for building works – the most noticeable of which is the removal of the wall separating The Keeper’s Gallery from the main corridor and public restaurant. We installed a projector to showcase what is currently on display to tempt people visiting The National Archives to wander in and see the exhibitions. 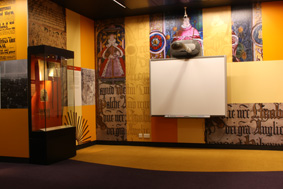 Running a project like this on such a short timeframe is not without its problems. Many have noticed that our new signage was delivered without the apostrophes! These and a few other slight imperfections are being ironed out but most people have been pleased with the changes we’ve made.

If you’ve had a chance to check out The Keeper’s Gallery we’d love to have your feedback.  Leave us a feedback card on site  or a comment below.