Seventy-five years ago this week the Battle of the Ardennes began to draw to a close, with the Allies declaring victory. This was clearly an American victory, one that had come at the cost of more than 80,000 US troops killed, wounded and captured.

Ironically, although the Germans failed in their objective of punching a gap in the Allied front line to separate the American armies from their British allies, the British and Americans would become divided during the course of the Ardennes Offensive. Such would occur, not by force of German arms, but through a fake radio broadcast which, at a critical moment, helped to fuel an Allied public relations fiasco to a point where it went out of control. 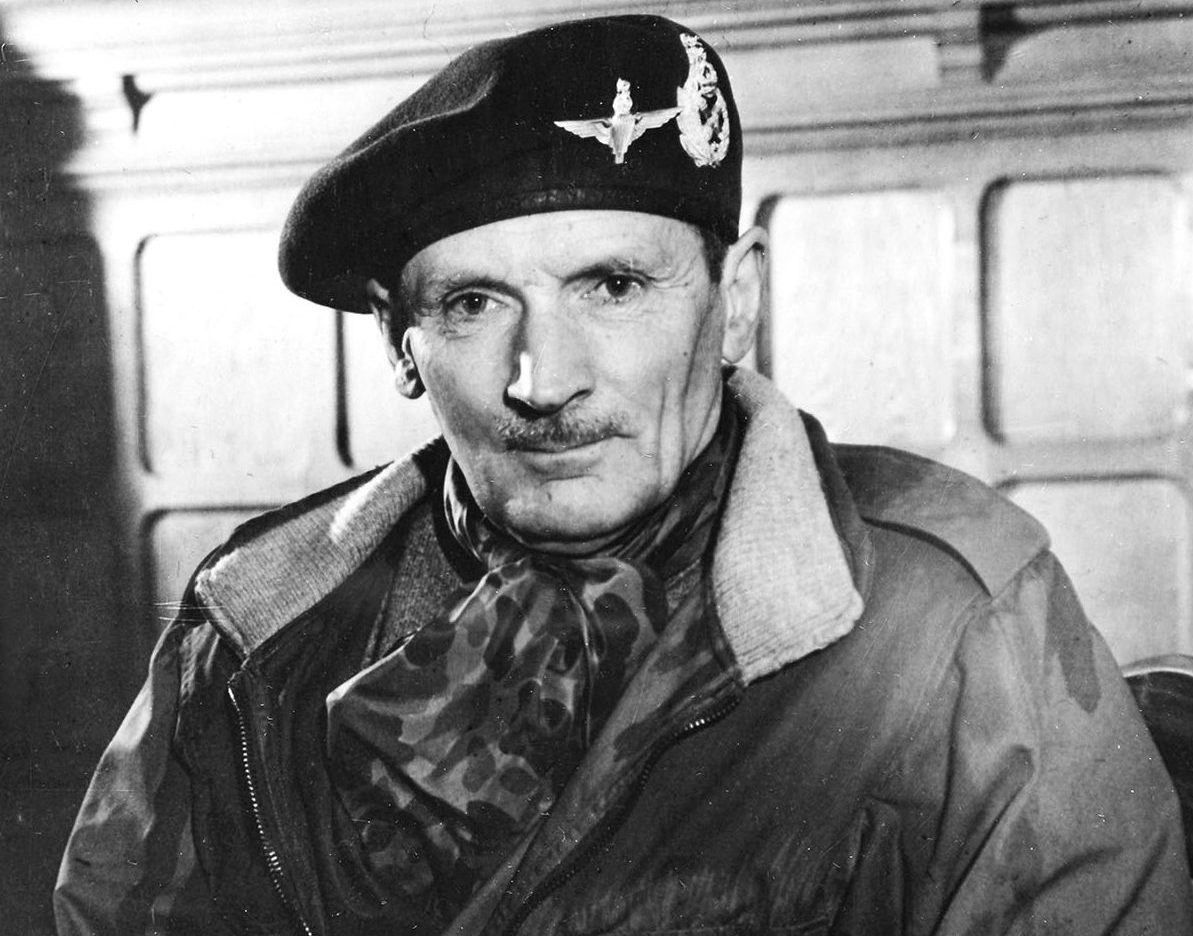 This inflicted lasting damage on Anglo-American relations during the final four months of the Allied campaign in North-West Europe. It all began with a dull and clumsily-worded press statement delivered by Field-Marshal Bernard Law Montgomery, the commander of British 21st Army Group, who was placed in command of the northern segment of the Allied line throughout the German offensive.

Within the CAB 106 series are the working papers for the text of ‘Victory in the West, Volume II’. These were compiled for the second of an 18-volume official history of the Second World War, prepared by the Historical Section of the Cabinet Office and published by Her Majesty’s Stationery Office in 1968, which describes the 1944-1945 military campaign in Western Europe. The author, Major L F Ellis, dedicates a section of notes to the debacle that ensued from the Montgomery press conference, held on 7 January 1945, which took on the proportions of a crisis seemingly greater than the Ardennes Offensive itself. The notes read that Allied Supreme Commander, General Dwight D Eisenhower, later recalled this incident as one that caused him ‘more distress and worry than did any similar one of the war’ (CAB 106/1107).

At first glance, the text of the press statement appears relatively innocent, and seems to be nothing more than a typical briefing on the military situation since the German attack on 16 December 1944, with a glowing tribute to the resilience and fighting abilities of American soldiers in the battle. However, Montgomery had a far more pressing reason for holding this press conference. According to Ellis, certain factions of the British press, particularly the Daily Mail, had never given up hope of Montgomery being appointed overall commander of Allied Land Forces in Europe, making him second only to Eisenhower in terms of authority over Allied forces on the continent. The American military setback in the Ardennes gave the British press an opportunity to revive this argument; they critiqued American military chiefs and their handling of the German offensive, singling out Eisenhower for particular criticism.

Montgomery, while clearly defending Eisenhower as his superior, did not labour in his efforts to condemn the criticism of the British press outright. Indeed, his defence of Eisenhower appears disingenuous. In addition, while he went to great lengths to describe the valiant efforts of key American units in the battle, such as the 101st and 82nd Airborne Divisions, as well as the US 7th Armoured and 106th Infantry Divisions, he also underlined British involvement in the battle, such as that of the British 6th Airborne Division. Although, as Ellis observes, Montgomery delivered a ‘handsome tribute to the American army, its general tone and certain smugness of delivery undoubtedly gave deep offence to many American officers at SHAEF [Supreme Headquarters Allied Expeditionary Force] and Twelfth Army Group’ (CAB 106/1107). However, the initial press reactions to the speech were favourable on both sides of the Atlantic, and it seemed that poorer impressions at an official level would die away, being remembered as little more than a small quarrel between British 21st Army Group and American 12th Army Group commanders. 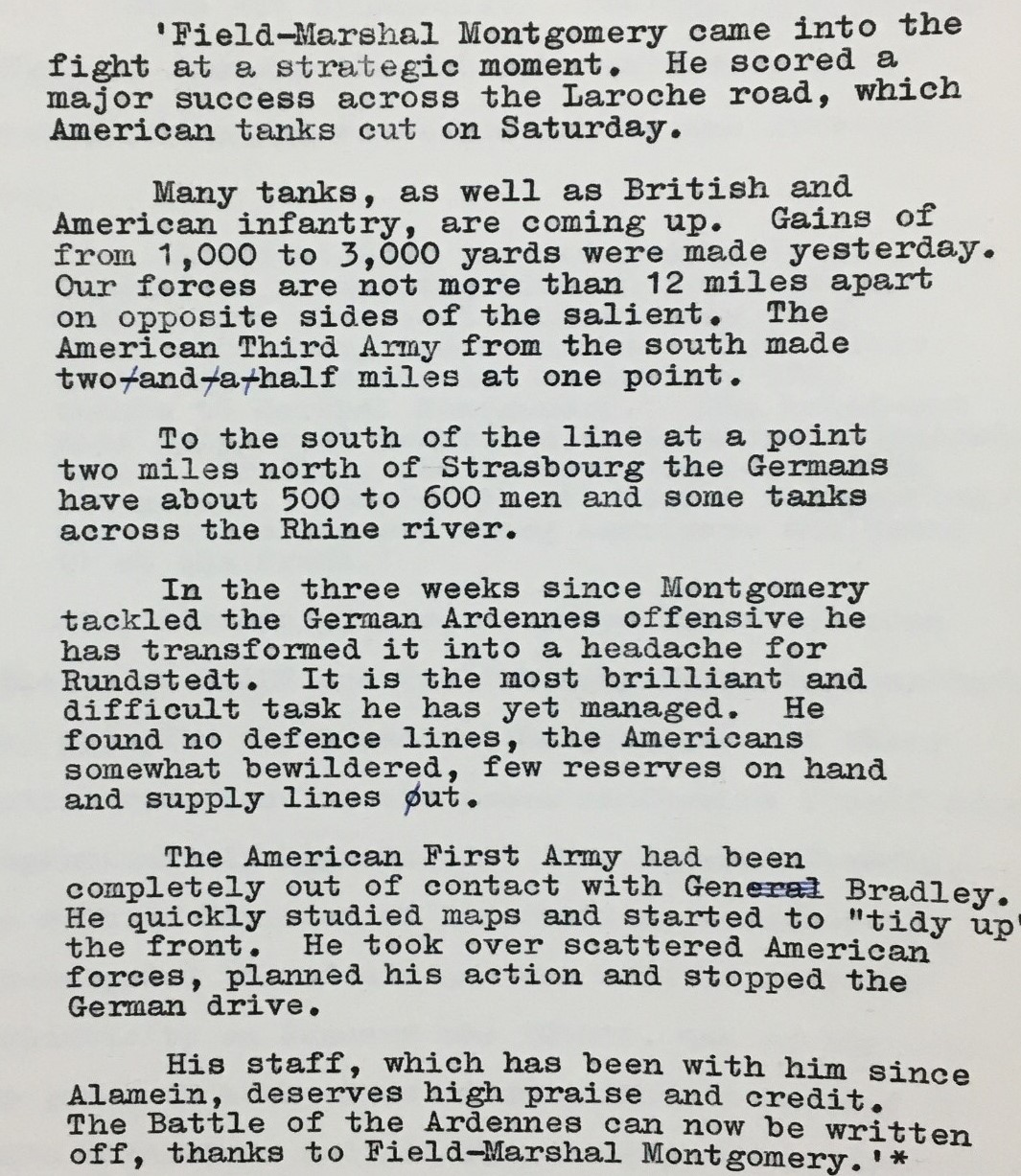 The above broadcast, recorded by the American Monitoring Service on the morning of 8 January, the day following Montgomery’s press conference, would be picked up on the same wavelength used by BBC to broadcast to Allied forces in Europe. It purported to be an official BBC comment on the press conference which, according to Ellis, ‘cleverly slanted the whole affair in a way calculated to give most offence to the Americans’ (CAB 106/1107).

This radio broadcast was heard by large numbers of American service personnel stationed in Europe, who were accustomed to listening to the BBC on the same wavelength, and who naturally assumed that the broadcast was genuine. Needless to say, American outrage at the implied slur on their military competence underlined the true destructive force of the fake radio broadcast.

Receiving wide publicity in the United States, the fake broadcast would be reproduced by all Hearst newspapers, with the New York Daily News running the story under the inflammatory headline ‘Applause to Monty: apple-sauce to Yanks’ (CAB 106/1107). The New York Herald Tribune produced a particularly icy paragraph from their correspondent who was reporting from the Ardennes front while embedded with General George Patton’s 3rd Army.

By far the most serious impact of the fake broadcast was the fact that senior officers at SHAEF and 12th Army Group, who accepted it as a genuine BBC bulletin, responded gruffly, with their responses to the Montgomery press conference being proportionately aggravated by the content of the bogus broadcast. This had the desired outcome of creating dissent within the Allied command structure at a moment when the Ardennes battle was turning in their favour. The British Minister of Information, Brendan Bracken, having promptly investigated the origin of the broadcast, was able to deny its authenticity on 10 January, with the British and American press carrying a BBC disclaimer and account of the incident on the following day. By then, the damage of broadcast had well and truly taken its toll.

General Omar Bradley, the commander of 12th Army Group, who was enraged by Montgomery’s lack of mention of the key American field commanders in the Allied counterattack during the Ardennes battle, issued his own statement to the press on 9 January. It was regarded as fair and moderate by most British and American papers, according to Ellis, and provoked little comment in any except one. The Daily Mail, resolutely sticking to an editorial policy which promoted Montgomery’s interests, decided to attack General Bradley’s statement as ‘A Slur on Monty’. Their key objections lay in the temporary and subordinate position to which Bradley had characterised Montgomery’s role in the Ardennes battle. While not wishing continue the ‘Transatlantic “slanging match”’ any further, the newspaper forcefully argued that Montgomery had been treated unjustly by the Americans, who had accepted the authenticity of the fake broadcast all too readily (CAB 106/1107).

This comment by the Daily Mail deepened the controversy which had been amplified by the fake broadcast, turning the fallout from Montgomery’s press conference into a full-blown public relations crisis, and the so-called ‘slanging match’ between the British and American press into a transatlantic media battle. By now, British Prime Minister Winston Churchill, who was exasperated by the Anglo-American rift, and appalled at the dissent which had struck at the heart of the Allied command hierarchy in the midst of a major offensive campaign, felt it necessary to intervene. He confided in his military assistant, General Hastings Ismay, that Montgomery’s statement had been a disastrous blunder. 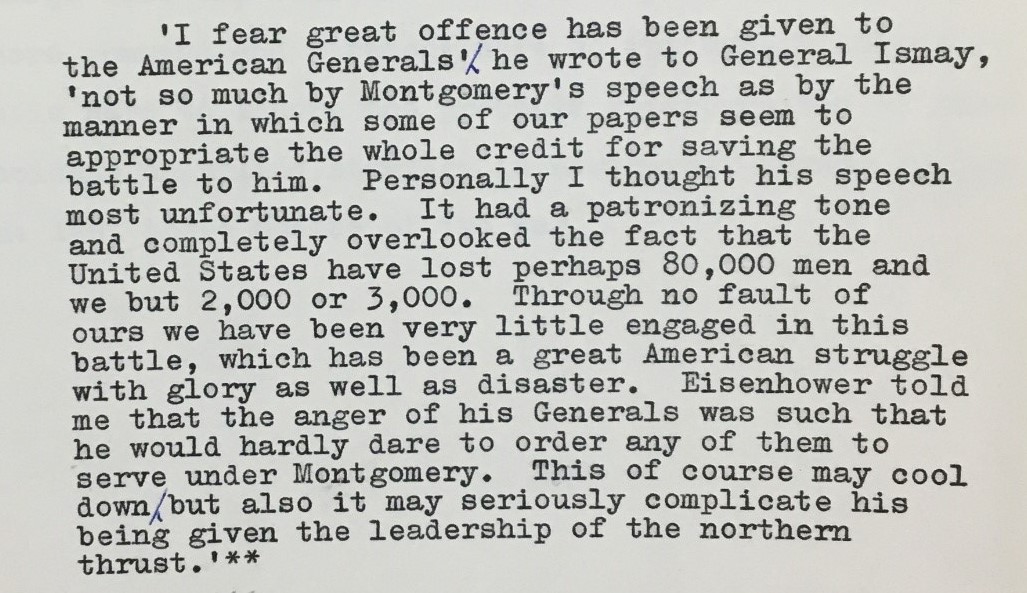 On 18 January, Churchill addressed the House of Commons for the first time in the year 1945 to brief members on the progress of the Allied counterattack in the Ardennes. With great care in his choice of words, he briefly alluded to the recent media controversy and clarified, for once and for all, who were the real victors of the Battle of the Ardennes.

‘I have seen it suggested that the terrific battle which has been proceeding since 16th December on the American front is an Anglo-American battle. In fact, however, the United States troops have done almost all the fighting and have suffered almost all the losses. They have suffered losses almost equal to those on both sides in the battle of Gettysburg. Only one British Army​ Corps has been engaged in this action. All the rest of the 30 or more divisions, which have been fighting continuously for the last month, are United States troops. The Americans have engaged 30 or 40 men for every one we have engaged, and they have lost 60 to 80 men for every one of ours. That is a point I wish to make. Care must be taken in telling our proud tale not to claim for the British Army an undue share of what is undoubtedly the greatest American battle of the war and will, I believe, be regarded as an ever famous American victory’ (CAB 106/1107) 1.

In his summation of the affair, Major Ellis concluded that ‘Anglo-American relations during the war probably never went through a more difficult phase than in the first few weeks of 1945’, with the press on both sides of the Atlantic bearing major blame for accentuating the crisis beyond its actual proportions. Eisenhower later wrote that ‘no single incident that I have ever encountered throughout my experience as an Allied commander has been so difficult to combat as this particular outburst in the papers’ (CAB 106/1107).

Long after the war had ended, many American ex-servicemen continued to believe that the Nazi’s fake broadcast on 8 January 1945 had been a genuine BBC broadcast. The incident highlights a very important fact about what many regard as a modern-day phenomenon. While ‘fake news’ is nothing new, history teaches us that it can be powerfully destructive when wielded maliciously at a moment of crisis, leaving terrible and long lasting damage in its wake. The fact that during the post-war period, neither Eisenhower nor the gentle-souled Bradley ever truly forgave their British colleague for his bungled press statement, bears testament to this fact.