Harris, Tisley or Dove? A question of identity

A group of volunteers at The National Archives has recently completed a project to catalogue nearly 18,000 bundles of correspondence received by the Home Office between 1820 and 1839, which are now in the series HO 17, Criminal Petitions (Series 1). Most of this series comprises petitions for clemency from or on behalf of convicted prisoners, but cataloguing records in detail can expose unusual and unexpected things. One such example is a bundle of correspondence which concerns Joseph Harris, convicted at the Old Bailey in 1829 of being John Tisley and having returned from transportation for life 1.

An account of the trial can be found on the Old Bailey Online website 2 (as can an account of Tisley’s original trial 3). In his defence Harris produced a number of witnesses who swore that he was not Tisley, including Tisley’s mother and sister, and the man who had prosecuted him in 1815. None of his witnesses, however, had known Harris for more than 18 months and no members of his own family appeared. The two constables who had seized Tisley 14 years earlier both swore that Harris was Tisley. He was found guilty and sentenced to death.

At this point petitions might be sent to the Home Office, from the prisoner or his family, pleading for a mitigation of his sentence, but that did not happen in this case. Instead anonymous information was given to Mr Capper at the Home Office. The informant said that Harris was not Tisley but actually George Dove, who had also been transported for life 4. A note among the papers confirms that Dove was originally transported to New South Wales in 1813 but escaped in 1815. 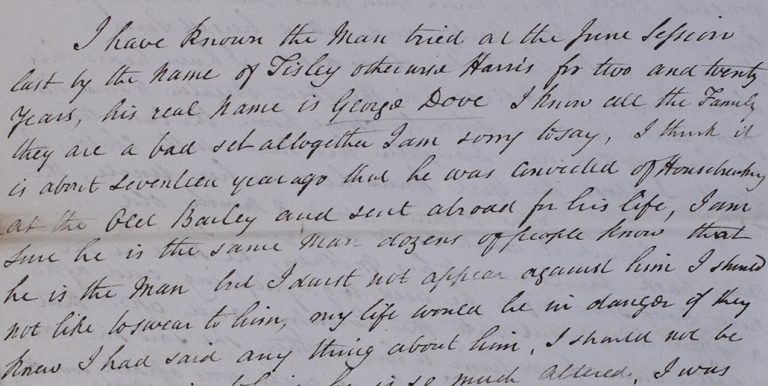 The informant goes on to say that Dove had returned eight or nine years earlier and went by the name of Joseph Harris. A short time after his return she read a letter to his mother, in which he said he had been convicted again and sentenced to be ‘sent away for seven years’ 5. The informant is clearly no friend of the Dove family, referring to them as ‘a bad set altogether’. She alleges that Dove had fathered a child with his niece, although she does concede that the girl probably didn’t know he was her uncle. Dove’s family knew he had returned and were very afraid of being indicted. She says she dare not swear against him because her life would be in danger.

If Harris was not Tisley but Dove, then, although guilty of returning from transportation, he had been convicted wrongly.

The Home Office made some attempts to establish the truth of the matter. Copies of descriptions of Harris, Tisley and George Dove were obtained from registers of prisoners received on the hulks. Harris is described as having a crucifix tattooed on his left arm and, significantly, the initials ‘G D’ on his right.

Mr Capper concluded that the description of Joseph Harris, when he was transported in 1817, matched that of the man in Newgate, while the description of Tisley did not. Unfortunately, only half the description of Dove survived and it was not conclusive. An investigation into the Dove and Tisley families found that there was no connection between the two families, though they lived in the same area.

A letter from the Recorder of London, Newman Knowlys, says that the conviction was very questionable and the convict probably entitled to a pardon but, if it was certain that he had returned from transportation, he could be capitally convicted on a fresh indictment or sent back to New South Wales without any further trial. Although the Dove family claimed they had not heard from George since his transportation, they may have wished to conceal the truth.

Another letter from Mr Stafford, at Bow Street Police Office, concludes that the man was obviously George Dove, but it would be difficult to get witnesses to satisfy a jury of this if another indictment was made in his real name. He suggests considering sending him abroad again or granting a remission of his original sentence.

The Home Office was clearly in a quandary as to what to do. The story then takes another turn.

A certificate, signed by surgeons [W Box] and Edward Stanley, certifies that Joseph Harris, alias Tisley, ‘is in a most dangerous state of insanity’ and should be removed to an asylum. A warrant 6 was drawn up for his removal to Bethlem Hospital, in the name of Harris alias Tisley. The Criminal Patient Admission Register for Bethlem Hospital (held at Bethlem Museum of the Mind) 7 records that he was admitted on 10 October 1829 and escaped on 4 May 1830. There are no clinical records for him.

He survives in a number of different records under his various aliases but only in the HO 17 records is there information to tie all these separate strands together.

What became of him after this we may never know. Whatever else he may have done, he presumably did it in a different name.