Getting creative with our collections: a women’s history zine workshop 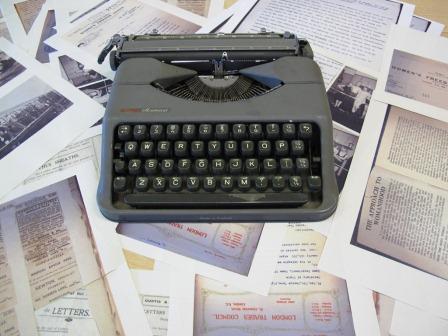 Typewriter and photocopies of National Archives records used in the workshop.

Here at The National Archives we are keen to see people engage with our records in a variety of different ways. At the moment one of the ways we are exploring is interpreting our records through creative practice. Recently we held Files on Film, a competition asking people to respond directly to individual records through the medium of film, with fantastic results.

To keep exploring these creative interpretations, on Saturday 29th March, my colleague Jenni and I held a workshop to look at other ways this could be possible.

Our selected format was zines, and our topic was women’s history, to close Women’s History Month. Zines are small-scale, self-published alternative magazines that allow lots of creative freedom. They have historically been used to express marginalised perspectives, principally that of women, LGBTQI (Lesbian, Gay, Bisexual, Transgender, Queer and Intersex) and mental health experiences, and are themselves collected at many archives, including the Glasgow Women’s Library, the Feminist Library and the British Library. Having become a medium for presenting women’s voices currently and historically, they seemed like the perfect format!

The workshop was open to anyone to attend, and together we set about exploring how our records could be re-interpreted and re-presented. 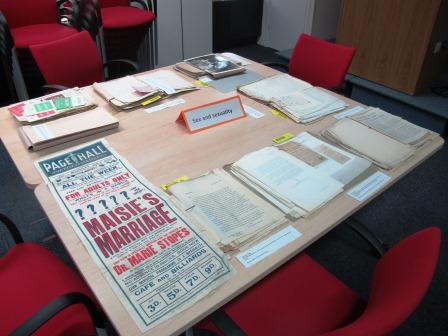 One element of the origional document display that was used for inspiration, on the theme of ‘sex and sexuality’.

Through the session we introduced the types of records we have relating to women’s history and ways of locating them. The National Archives may not be the most obvious source for women’s history, however issues that were important to women’s lives were also important to the state, from reproductive rights to the regulation of women working. To try and organise the vast records of women’s history three key themes were discussed; women and protest, women and work and the regulation of sex and sexuality. These themes then followed through to an original document display of twenty one items.

Overall the key thing we tried to tease out was women’s common life experiences, which we mainly confined to the 20th century, but from an international and intersectional perspective. Documents looked at birth control movements in Malaysia, women’s suffrage in Bermuda, and women’s experience in asylums in Jamaica. Documents looking at the UK suffrage movement took various angles from the perspective of mental health, disability and hunger striking, attempting to widen what is generally focused on as ‘women’s history’. 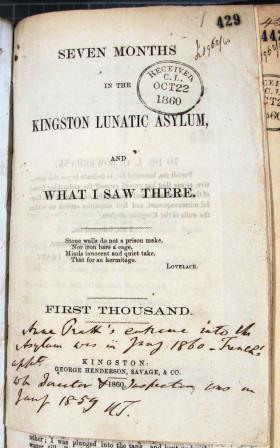 One of the themes delved into was sex and sexuality, which allowed us to explore lesbian, gay, bisexual and transgender experiences in the records. This included tickets from Lady Malcolm’s Servants Ball, an annual ball that occurred at the Royal Albert Hall and presented an opportunity for servants to socialise. The ball became known for cross-dressing and the development of a homosexual subculture. However it also allowed a focus on early twentieth-century ephemera about contraception, which provide are great source for looking at sex and sexuality, and which we have many records on.

Everyone engaged with documents in ways we could not have foreseen. One attendee stumbled across references to Mary Seacole in an unexpected document: CO 137/350/52, about Ann Pratt, a former resident of an asylum in Kingston, Jamaica. Unusually the record from 1860 tells Ann’s story in her own words in the publication entitled ‘Seven months in the Kingston Lunatic Asylum and What I Saw There’.

Another participant connected particularly strongly with the records on Sylvia Pankhurst, founder of the East London Federation of Suffragettes who fought for the vote for all men and women, not just on the basis of property qualifications. 1 The hunger strike registers from Holloway Prison show the impersonal tone of the document noting the attitude of Sylvia upon being force fed against her will was at times ‘sullen and reticent’ and at others ‘very bad tempered’. 2 It was the statements from both prison officials and suffragettes that particularly inspired this zine page, which used original quotes from the record.

Others teased out themes that spread across multiple documents in the display, such as marriage and the different treatment of married women in work with the practise of marriage bars ‘(To us, married women have been, to quote the Treasury – ‘a perfect nuisance”). 3 This included the attitude of women themselves towards work post-Second World War, with the largest percent of women answering ‘A woman’s place is in the home’  in a survey on the subject. 4 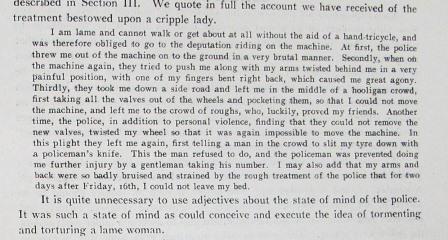 Extract from a publication by the Women’s Social and Political Union quoting the experiences of May Billinghurst on Black Friday in 1910.

For another the police actions against Suffragettes on Black Friday, in particular the story of May Billinghurst, struck a cord. May was disabled from childhood due to paralysis, and spent her adult life campaigning for the vote. The founder and secretary for the Greenwich branch of the Women’s Social and Political Union, May was repeatedly arrested for her militant activities. 5 Black Friday occurred on 18 November 1910 when 300 women marched on Parliament, and over 200 were assaulted by police in one of the most prominent events of the Suffrage movement.

Using the inspiration we gained from viewing these original documents, we used photocopies of sections to consider women’s experiences in the past and also how much has changed. This was particularly pronounced when considering the archived documents alongside present-day newspapers.

The workshop was great fun and oddly therapeutic, we all got involved cutting and pasting. The results are creative and exciting! The outcome was Dare to be Free, a collaborative zine created in the workshop.

We really hope to hold more of these workshops. Please keep a look out for future events. And feel free to suggest a theme!