Festive foods from times gone by

Personally, I eat food all year round – but at Christmas it feels as though you’re not doing your civic duty if you don’t tick off mince pies, chestnuts and mulled wine alongside a box of choccies and some shortbread biscuits. If you thought this was a modern day phenomenon you’d be wrong. Very wrong. 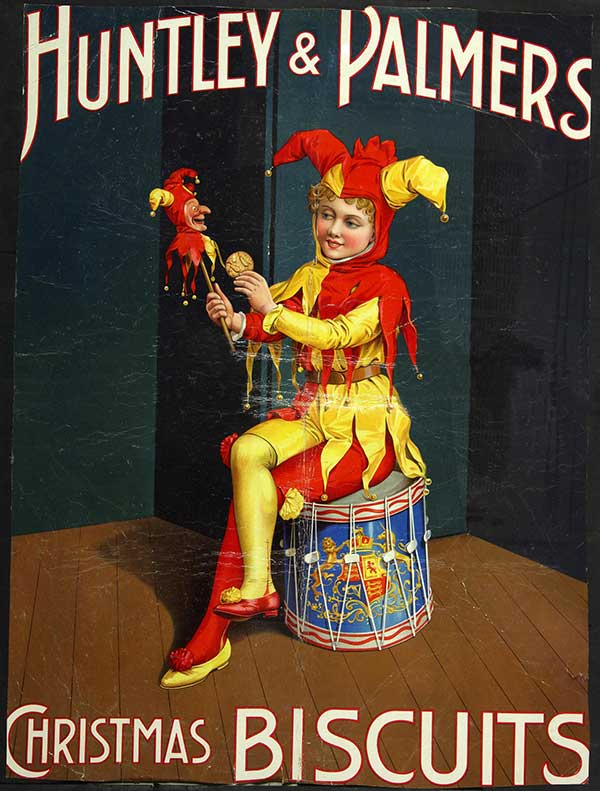 The National Archives is as full as Santa’s sack on Christmas Eve, with advertising and packaging designs for Christmas treats from the Victorian period into the 20th century. Manufacturers wanted to protect their marketing designs so that other companies couldn’t copy them. To do this, they had to fill in a form for the Board of Trade and provide a sample, copy or sketch of the design.

How lucky for us that they did, because these are now housed in The National Archives and provide an amazingly rich glimpse into the styles and tastes of that period.

Some of the companies with designs at The National Archives are still around – like Huntley and Palmer’s biscuits. This company was founded in 1822 by Thomas Huntley and George Palmer, and is still producing biscuits today. This advertisement is for their Christmas biscuits from 1905.

This Palethorpe’s Royal Cambridge sausages image from 1911 doesn’t really tempt me – huge, frankfurter-type sausages on a sledge..? Apparently they don’t know ‘the sort I like’. The company was founded by Henry Palethorpe in 1852, and in the 1990s was incorporated into Northern Foods. It’s still operating but is now part of a Norfolk company called Pork Farms.

I Love this Christmas price list from 1903 for Sinclair’s in Manchester – who wouldn’t be tempted by their offer of a 10% reduction if you order a whole barrel? And don’t worry, you’re not too late: Sinclair’s Oyster Bar is still operating. It’s a pub these days, but I believe it still serves oysters as well as beer with a head on it (as it should be). Interestingly, the actual building was built in 1720 but was taken apart, brick by brick, and moved about 300 meters when Manchester city centre was regenerated after the Arndale bomb in 1996. 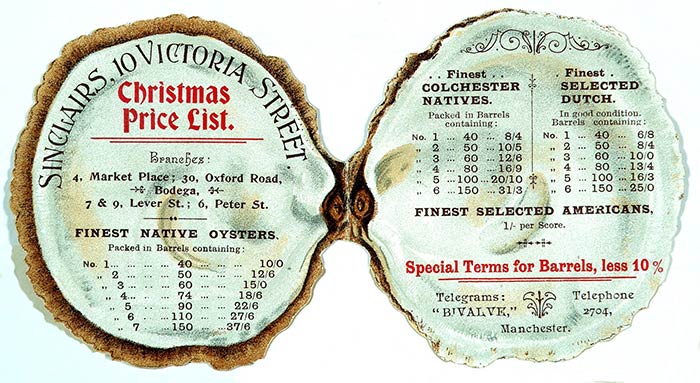 The advertisement below is for a Scottish company with a 200-year-old history. MacFarlane Lang & Co merged in 1948 with McVitie & Price, also Scottish, to form United Biscuits. I’m not sure how to interpret this image of Little Red Riding Hood and the Big Bad Wolf enjoying a rather amicable-looking skating session. Is it about Christmas peace and goodwill to all? The wolf appears to have decided not to eat Little Red Riding Hood or Granny but to share a box of biscuits with them instead.

Not sure I trust that look on his face, though.

Now here’s something to throw into conversation on your Boxing Day walk: who invented the digestive biscuit? Predictably, your walking partners will shout: ‘Alexander Grant who worked for McVities, of course. Next question!’ But that’s your cue to inform them that, actually, some believe it was Robert Middlemass of Peebleshire that first created the UK’s favourite biscuit. The Middlemass Biscuit Factory was in Edinburgh on the corner of Salisbury Place and Causewayside, on the site now occupied by the National Library of Scotland Maps Collection building. 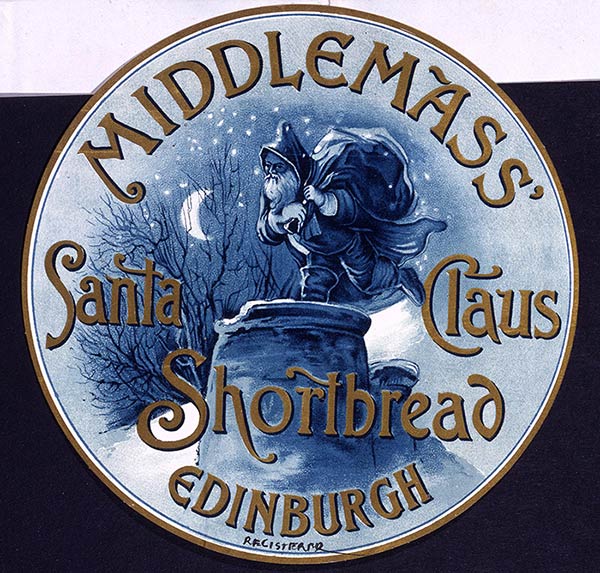 Christmas is not all about the food though – there’s quite a tradition of seasonal drink that goes along with the celebrations. I believe it’s acceptable in some households to drink champagne at breakfast, as long as you add a bit of orange juice.

In 1903 this advertisement for W T Stoneham’s Argyll Stores, Abergavenny, illustrates the selection of Christmas tipples on offer. Hall’s and Keystone wines were both produced by Henry James Hall, who traded as Stephen Smith & Co in Bow, London. The wines were among many Victorian and Edwardian ‘nervine’ drinks that fulfilled their promise to restore you through the addition of (ahem…) cocaine. One advert in Country Life magazine claimed that Hall’s wine contained ‘nothing but the extractive principals of the coca leaf, and although a powerful nervine, is practically harmless’. 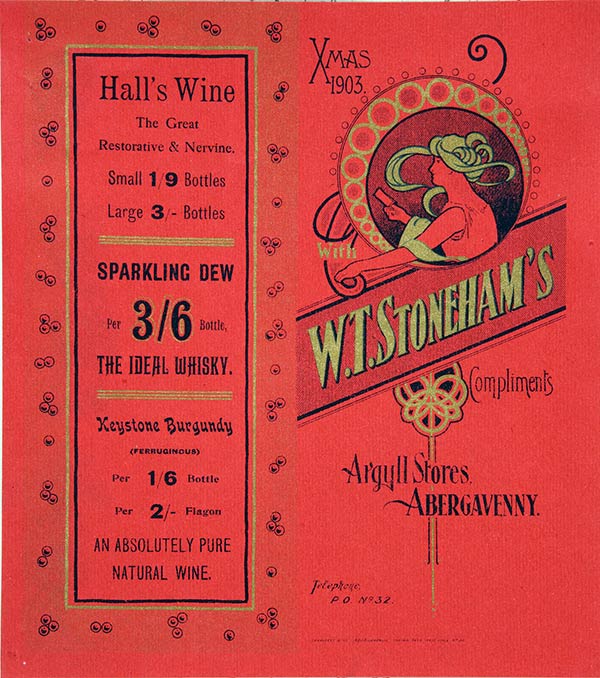 These Christmas advertising examples are part of a much wider collection of designs, trademarks, photographs and written works that were registered for copyright protection from the Victorian era up to the 1990s. If you want to know more, you might be interested in our recent series of subtitled webinars that are available on our YouTube channel.