You are cordially invited…

The ‘Entente Cordiale’ actually consists of three documents, the declaration respecting Egypt and Morocco, which you will find in FO 93/33/201, a convention concerning Newfoundland and West and Central Africa, which is held in FO 93/33/126, and a further document called a ‘déclaration annexe’, which deals with Siam, Madagascar and the New Hebrides, which we hold in FO 93/33/200. The documents were the result of negotiations between Lord Lansdowne and Théophile Delcassé, the French Foreign Minister, following strong support from King Edward VII, who visited Paris in 1903 and helped to pave the way for the diplomats. The documents are an understanding rather than a treaty, as they were designed to remove obstacles to closer negotiation by resolving long-standing colonial disputes in Africa, the Americas, Asia and the Pacific. 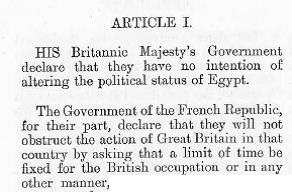 Declaration respecting Egypt and Morocco, part of Article 1 regarding Egypt, COPY 1/217 (i) 211

As a result, France came to recognise Britain’s administrative control over Egypt, while Britain acknowledged French influence in Morocco, with provisos that a French ‘savant’ would remain as Director of Antiquities in Egypt, while French influence in Morocco would not interfere with the Spanish occupation of Mediterranean coastal districts. France ceded fishing rights over the western coast of Newfoundland, but she received territorial and trading rights in Nigeria and Senegal. Britain dropped their objection to the introduction of a French customs tariff in Madagascar and French and British zones of influence were more clearly delineated in Siam. Finally, France and Britain resolved their difficulties over the jurisdiction of the New Hebrides, which would become a condominium in 1906.

The Entente Cordiale, along with the Franco-Russian Alliance of 1892 and the Anglo-Russian Entente of 1907, helped to pave the way for the Triple Entente, an alliance of the three powers that served as a counter-balance to the Triple Alliance of Germany, Austria-Hungary and Italy. Although the Entente Cordiale offered diplomatic rather than military support, the alliances that it led to served to create further distance with Germany and her allies and in 1914 all three countries entered the First World War as allies against the Central Powers of Germany and Austria-Hungary.

Until recently the principal document forming the Entente Cordiale was listed on our catalogue by the brief description given to it by the Foreign and Commonwealth Office, namely Protocols of Treaties: France: Declaration and Secret Articles, 08 April 1904. Correctly, but annoyingly for researchers, the Foreign Office organised their treaties and agreements by country, type of agreement and date of signature, and it is with these descriptions that they were transferred to The National Archives. However, many agreements are more commonly known by the country in which they were signed, such as the Treaty of London, 1839, or by one of the plenipotentiaries who signed it such as the Bowring Treaty, 1855, or by what the document has come to represent, such as the Entente Cordiale.

To make these documents more accessible, 272 catalogue entries in the principal series for treaty protocols and ratifications, SP 108, FO 93 and FO 94, have had their description enhanced to include the name by which they are more popularly known. So that now, the Convention on Prisoners of War, 1929, may also be discovered under its more popular name, the Geneva Convention; the Protocol of Proceedings of the Berlin Conference, 1945, will also be found as the Potsdam Agreement and the Terms of Surrender of Boer Forces, 31 May 1902 can be located by typing in the Treaty of Vereeniging.

If this has made you want to find out more about treaties, why not search Discovery to view the catalogue descriptions for treaties, listen to a podcast, or download the signed protocol for a small fee here or view the scans free of charge at The National Archives.