The causes and prevention of tri-nitro-toluene (TNT) poisoning

The First World War centenary continues to bring to our attention countless acts of sacrifice and courage from our soldiers, sailors, airmen and nurses across all theatres of war. Such acts of bravery and sacrifice were not just restricted to the front lines overseas – many examples can be found amongst the men and women of the Home Front back in Britain. 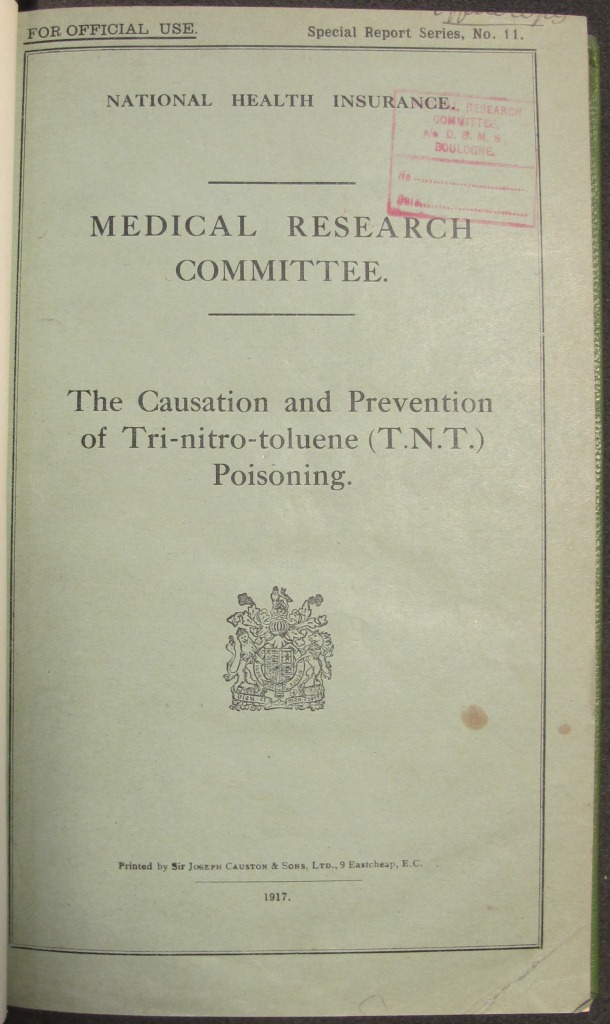 Today’s blog – the latest in our Medical Technology series – explores the danger of tri-nitro-toluene (TNT) poisoning amongst munitions workers and attempts by the Medical Research Council to explore the causes and reduce the threat of this potentially fatal condition amongst workers.

My interest in this area was first triggered by a case paper amongst our Middlesex Appeal Tribunal papers in MH 47. This collection details the appeals made by individuals seeking exemption from compulsory military service after January 1916, revealing many different ways in which the war was affecting society at home.

The case of Herbert Gerald Perry includes a statement that his wife, Annie Elizabeth, had died from TNT poisoning in June 1917 at the Hayes Filling Factory while undertaking munitions work. This left Herbert as the single father of his two children, Herbert and Gladys, aged 12 and 11 respectively, as well as the main financial support for his mother, aged 68. 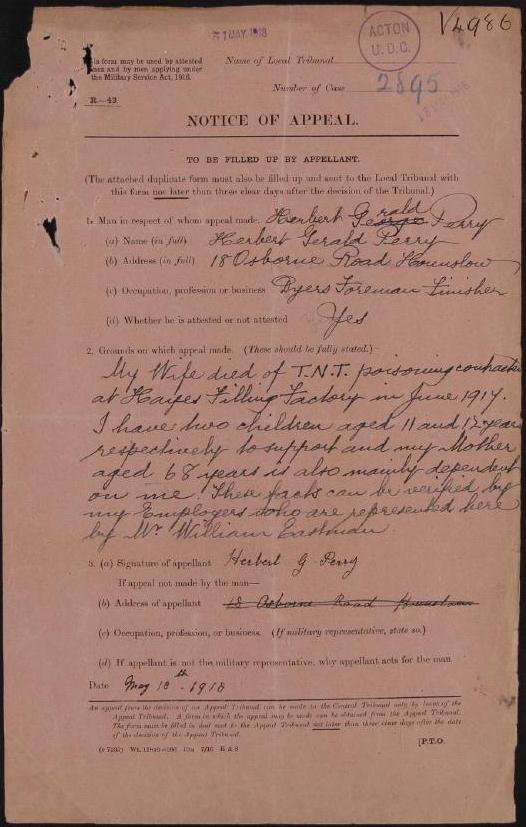 The loss of Annie Perry to TNT poisoning underlines that it was not just overseas in the front lines that the ultimate sacrifice was given. Both men and women at home and across the British Empire would also lose their lives or have them changed forever during this period as a result of accidents or illnesses contracted while undertaking war work.

The importance of munitions work to the British and Allied war effort – as recently explored by my colleague, Dr George Hay – should, of course, not be underestimated. As a result, in September 1915 a Health of Munitions Workers (Fatigue) Committee was established to advise on the impact of fatigue and other health threats to munitions workers across the country, with correspondence to be found in FD 5/37-38.

In fatal cases, TNT poisoning could lead to toxic jaundice or aplastic anaemia, leading the Medical Research Committee to investigate and publish a report at the end of 1917 into The Causation and Prevention of Tri-nitro-toluene (T. N. T.) Poisoning, which can be found in FD 4/11.

Their investigations initially focussed upon the threat of exposure to TNT related fumes or dust. Using Siebe-Gorman respirators, experiments were carried out using volunteer munitions workers to see if the use of respirators significantly reduced the trace of TNT amongst their urine samples. Although the results showed no noticeable decrease in the reaction of TNT amongst the samples, it did prove that the respirators were more of a hindrance to the workers. The rubber facial pads caused such skin irritation and continuous discomfort that many of the volunteers were forced to take them off during the experiments due to sore faces.

The next step for the Medical Research Council was to look at the danger posed by absorbing TNT through the skin. Research at ‘Factory F’ found the cotton gloves issued to protect workers had in fact offered very little protection to the hands. The perspiration caused by the nature of the work only resulted in increasing the likelihood that TNT powder would be absorbed through the cotton gloves and into the hands, which was found to be ‘caked in the creases of the skin’. 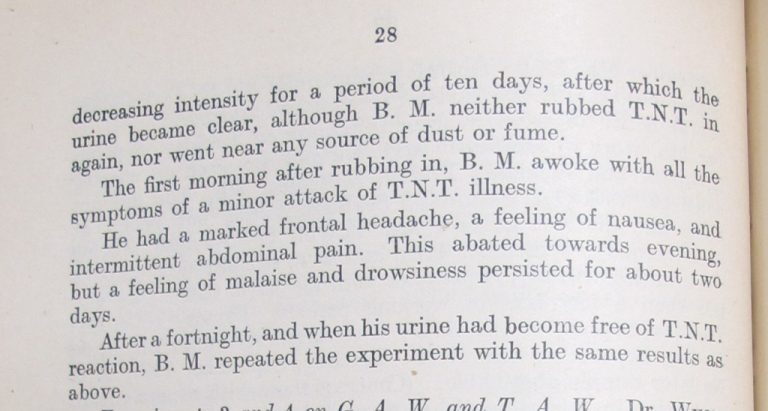 Medical Research Council report into the causes and prevention of TNT poisoning. Experiments with rubbing TNT into the palms of a munitions workers hands led to the symptoms of minor TNT poisoning (catalogue reference: FD 4/11)

This discovery led to experiments on a male worker, referred to only as ‘B. M.’ who was asked to rub TNT into the palms of his hand using a an amatol pellet, which contained 20 per cent TNT. The next morning, the volunteer awoke and reported ‘frontal headache, a feeling of nausea, and intermittent abdominal pain’ – all the signs of a minor attack of a TNT related illness. For the purposes of consistency, poor old ‘B. M.’ was asked to repeat the same experiment two weeks later, at which point all trace of TNT in his system had disappeared, with exactly the same results as the first test.

As the experiments and tests continued, the researchers returned to an experiment based around the use of respirators with volunteers also having unprotected hands, so to compare results. The experiment was thrawted, however, revealing yet another threat of carrying out munitions based work:

‘Unfortunately, a fire, followed by an explosion, wrecked the workshop in which the experiment was to have been performed, and the experimenters only escaped being involved by a detention in London on business connected with TNT poisoning’.

These brief insights into how munitions work could impact upon the health of those producing armaments underlines the total war which was unfolding. The rapid expansion of armies required an even more rapid increase in production of shells, bullets and other military equipment. The technologies used to form new weapons or sustain the ever increasing industrial outputs would ultimately drive the need for new medical treatments, experiments and unfortunately, as with the case of Annie Elizabeth Perry, lead to a considerable loss of life across the globe. Be it overseas or at home, these losses would impact individuals; families; men; women; young; and old alike. Sacrifices we shall never forget.