Calculating the destruction of all life

My colleague Linda and I have spent the last couple of weeks trying to sketch out the next few iterations of our machinery of government visualisations. We have, perhaps inevitably, come across some difficulties. As we were always aware, the changes in domestic departments over the years are difficult to represent in a simple way, without losing accuracy. Would it make more sense to show changes in a very basic way (health responsibilities go from Ministry of Health, to Department of Health and Social Security, to Department of Health, for example). Or does it make more sense to show individual functions of government, which would surely amount to hundreds of visualisations (i.e. childcare responsibilities, which did for a period lie with the DHSS)? 1 It’s certainly been a little problematic, but nothing that can’t be solved. It’s not the end of the world.

Yet, when I turned on the news last week, what I thought was standard Hollywood-issue CGI special effects turned out to be a real-life meteorite entering the atmosphere above rural Russia. The next day, when I had finally clambered up from under my bed, I wondered whether the UK government ever considered what would happen if a meteorite hit this country. How does a government prepare for such an event? Is there any point?

It appears that our ever-prepared government had indeed considered such a worrying occurrence, and in some detail. A memorandum entitled ‘Estimated Risk of Multiple Fatalities due to Meteorite Strikes on England and Great Britain’, created by the UK Atomic Energy Authority and published in August 1980 can be found in the file AB 7/25401.

The document is pure mathematics (well, statistical mathematics). The authors, LS Fryer and KR Beck, create a set of equations which allow them to analyse how differently sized meteorites (iron and stone consistencies were considered) would affect the population (the density of the population is also calculated). This allowed them to generate the graph below, which shows their conclusions. That the population affected should go down as the frequency of meteorite strikes rises should perhaps not be surprising. 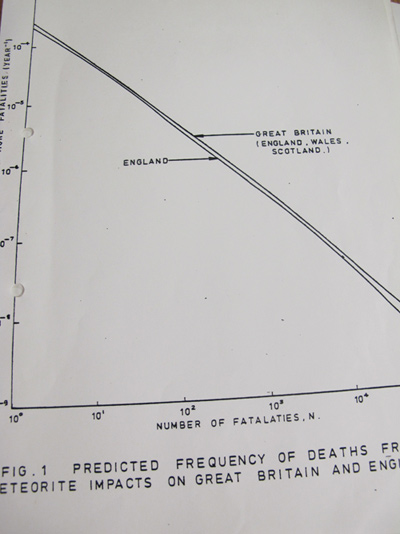 In introducing the memorandum, the authors described how the likelihood of multiple fatalities from meteorite strikes had long been used as a standard against which ‘the hazard from man-made and natural causes can be judged’. They are also careful to stress that their calculations are purely based on ‘analytical methods of prediction’. They write, ‘Although there is ample evidence of several major meteorite strikes in the past, which presumably killed all life within the impact area at least, there is no well-authenticated report of any deaths from meteorite strike impacts in recent years.’ The language of academia mixed with government has never been so sober.

However, the reason for that is because of the entirely serious nature of the subject. Not only are the authors considering the impact of a meteorite strike, but rather those ‘man-made’ causes. In 1980 The UK Atomic Energy Authority would have had a serious interest in what effect a nuclear bomb might have on the British Isles and, thankfully, all the evidence they had were estimates and calculations. This is particularly pertinent when we consider how close the 1983 NATO exercise Able Archer 83 came to sparking an atomic war with the USSR (not to mention how close that resembles the film War Games starring Matthew Broderick, released in the same year).

Considering this file raises several issues. First, the number of issues that concern government are so numerous that representing them individually in visualisations would be exacting, to say the least. Would it be necessary to create a departmental visualisation for ‘Meteorites’? Second, and arguably more importantly, the document provides little comfort regarding meteorite strikes. So, the next time you see a ball of light hurtling through the sky, you had better hope it’s just an alien invasion.