Anatomy of a disaster: the Bombay Docks Explosion 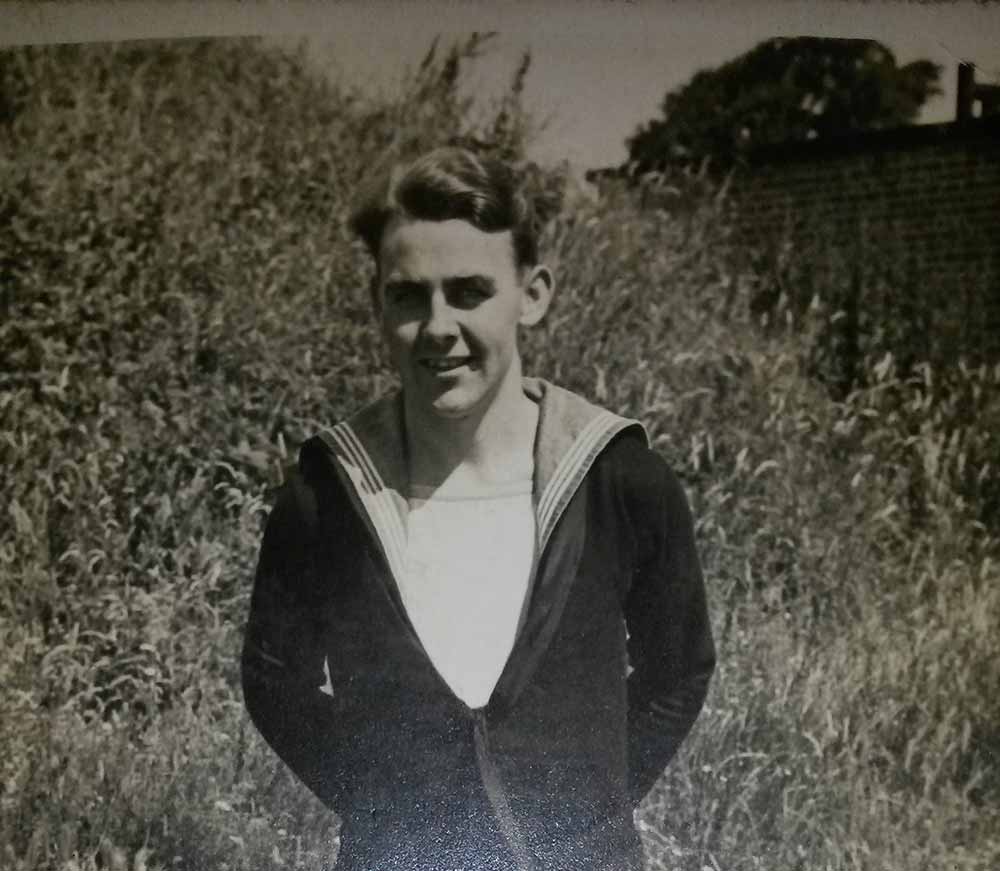 This narrative begins with a recollection of my father’s, a resident of a care home in October 2016. Dad recalled not only the name of the vessel on which he was a DEMS (Defensively Equipped Merchant Ship) gunner, but also the name of British ammunition ship SS Fort Stikine, the vessel that caused a massive explosion on Friday 14 April 1944 in the docks of Mumbai (called Bombay at the time).

This had remained in my father’s consciousness for many years not only because he was lucky to survive the disaster but because the explosions killed over 740 people and injured thousands more.

I examined our records in HO 187/739 and ADM 1/16065 to put together a timeline of the path to disaster and explain the inadequacies of the responses by all concerned.

The SS Fort Stikine, captained by Captain Naismith, was a 7,000 ton freighter. It reached Karachi on 30 March, where some of its cargo was unloaded, including crated spitfires, gold bars and 1400 tons of explosives including shells, torpedoes, mine signal rockets and incendiary bombs (most of which were for discharge at Bombay). Sulphur, cotton bales, timber, lubricating oil drums, turpentine, fish manure and resin were loaded to fill up the empty hold, flouting all normal rules.

The ship arrived in Victoria Dock on 12 April. Unloading started on the evening of 13 April, and then only of the fish manure and oil drums, some of which were leaking. This delay was the first of many errors that would lead to the catastrophic explosion.

Also on 13 April an officer of the Ministry of War Transport met with Chief Engineer Gow to discuss maintenance. The official sanctioned repair work but crucially this decision rendered the ship immovable except by tug. 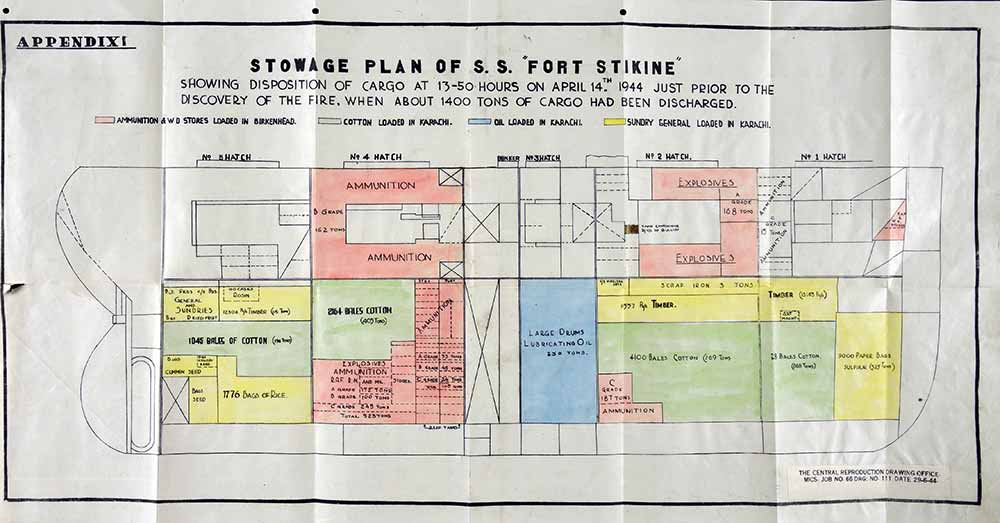 Fort Stikine was one of 13 ships being worked that day; next door in Princes Dock were a further ten ships. At midday on 14 April the stevedores broke for lunch. So, as it turned out, did the civilian watchmen, a fact unknown to the captain, his officers or the two DEMS Gunners patrolling the ship.

At approximately 12.45 smoke was seen coming from the ventilators of No. 2 hold. The Commission of Enquiry later speculated that a stevedore could have climbed the ladder out of No. 1 hold, gone through the bulkhead door and descended into No. 2 hold for a cigarette.

A member of the police force also saw the smoke at 13:30 but dismissed it, believing that those on board would have the situation in hand. It was not until 13.45 that Mohamed Taqi, a foreman of a stevedore gang, observed the smoke in No. 2 hold. The alarm was raised by the crew and soon several hoses were directed into No. 2 hold. A standard precaution in the docks was to have a trailer pump with full crew standing by when a ship was being discharged. Seeing the stampede of people from the ship, the Section Leader ordered his Sub Leader to contact the Fire Brigade Control Room and give them a Number Two message (this would have alerted the Fire Control Room that the ship carried explosives).

Unfortunately the Sub Leader was unable to telephone the control; he instead broke the glass on the fire alarm, alerting the Fire Brigade to a fire – but not that it involved explosives! Consequently only two engines were despatched. Due to the density of the smoke the crew and firemen could not find the source of the fire and poured water in blindly.

At 14:25 Major Oberst, Ordnance Service, (Indian Army), arrived on board and asked for the stowage plan; he pointed out the extreme danger to the docks and suggested the ship be scuttled. Around the same time, Commander J.H. Longmire, Chief Salvage Officer of RINR (Royal India Naval Reserve), and Mr N. Coombs, O.C. of the Fire Brigade Service, arrived and requested that a large quantity of sulphur and detonators be removed from No. 1 hold. A meeting between the Captain, Chief Engineer and all above mentioned was held, but it turned out that the depth of water prevented flooding the holds. Nevertheless Oberst reiterated his fears to the ship’s captain.

By 14:45 the bulkhead dividing holds No. 1 and No.2 had become hot, and the men in No. 1 hold could hear ammunition exploding in No.2. The viability of introducing steam into the hold and battening down the hatches was discussed. Oberst, Longmire and Coombs also talked about Captain Naismith’s inability to reach a decision as to the scuttling of his ship.

Colonel Sadler, the dock’s general manager, arrived on board at 14:50 and advised that the ship be floated out of the harbour. As the engines were disabled, the only way this could be done would be with tugs. Sadler and Coombs argued about the merits of the former’s solution; Coombs was optimistic that the ship could be saved.

Two water tugs arrived shortly after 15:00 with additional water hoses. None of the high profile men on board felt that he could take overall command; neither of the two men ashore authorised to do so could be contacted. So three conflicting points of view existed on board: Captain Naismith wanted to save his ship, Colonel Sadler his docks and Coombs wanted the Fort Stikine to stay where it was so that his crew could concentrate on extinguishing the fire.

After 15:00 an attempt was made to cut a hole in the hull where a hot spot has appeared, but the equipment failed and there was a delay obtaining more. By 15:15 the floating bales of cotton had begun to ignite and some of the explosives had caught fire. Thick black smoke poured through the hatches, engulfing the firemen; burning pieces of cotton spewed skywards threatening other ships in the docks.

At 15:50 a giant flame shot out of the hold and many firemen were forced to abandon the ship. Captain Naismith gave the order to his men to abandon ship; he was last seen walking towards one of the harbour sheds. His body was never recovered.

At 16:06 there was a massive explosion. Fort Stikine was blown in two; its boiler, still intact, was found a half mile away. A huge tidal wave swept across the dock and ripped ships from their moorings, with one ship finishing astride a warehouse. At 16:33 a second explosion occurred, damaging or destroying the remaining ships in Victoria and Princess Dock, including the SS Tinombo, of which my father was a crew member. He survived by jumping into the dock. In Victoria Dock alone, 13 ships were lost. 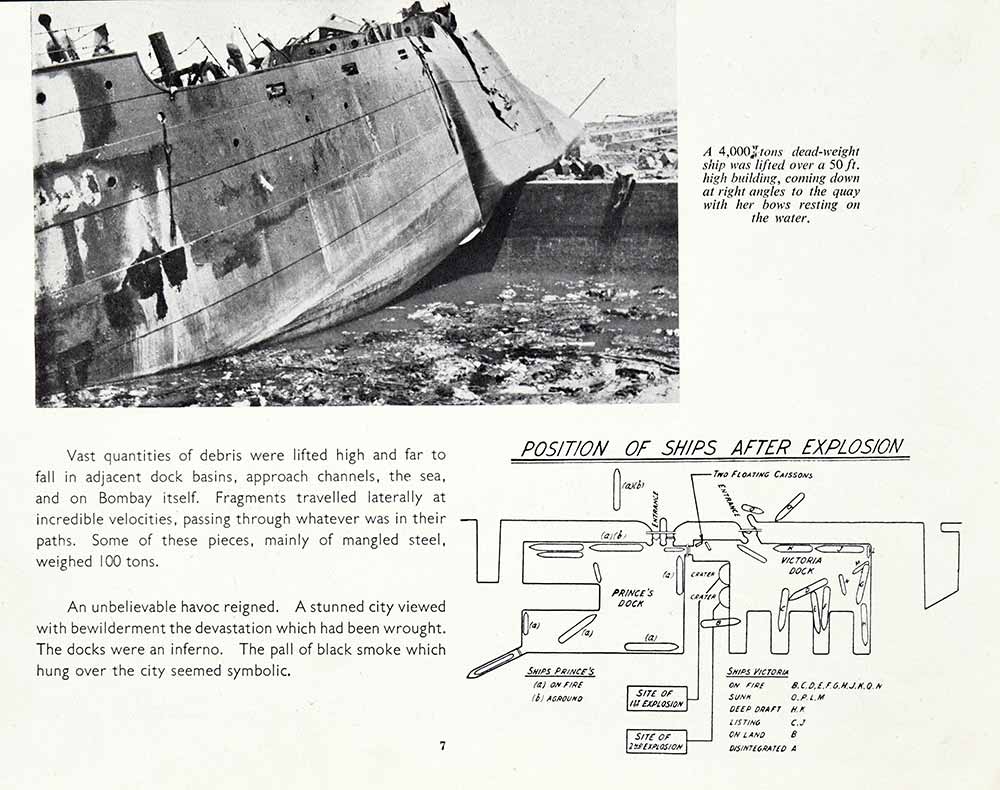 Wreck of a ship in Victoria Dock after the explosion (catalogue reference: ADM 1/16065)

Many people were killed outside the dock area by falling shrapnel and shells which exploded on impact. Approaching channels to the docks were littered with obstruction, and a vast land area was utterly devastated. It took four days to extinguish the main fire and for a  further two weeks smaller fires continued to smoulder in the ruins. 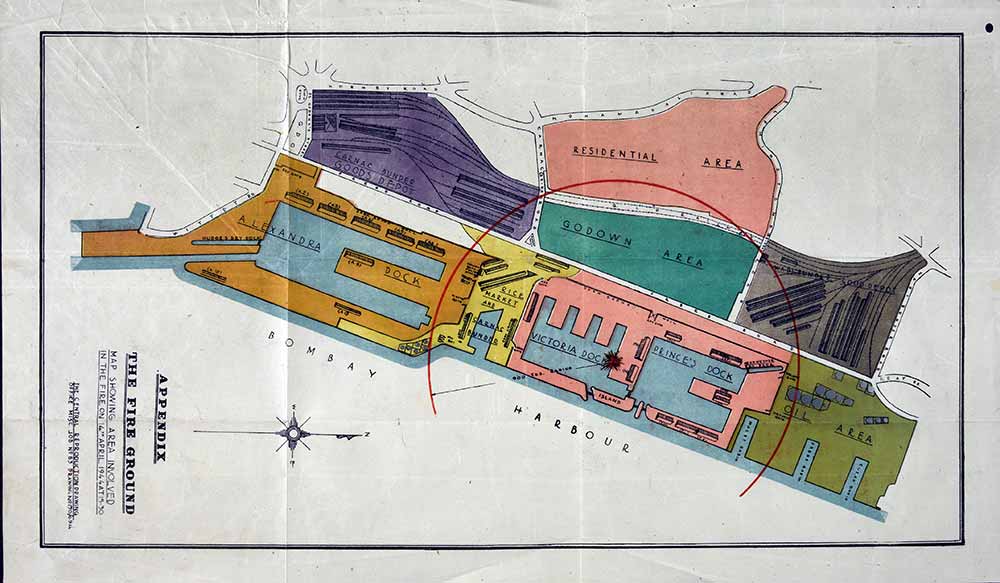 Overall, 231 people attached to the various services were killed, and another 476 injured. Outside the docks over 500 civilians were killed and a further 2,408 were injured. Thirteen ships were lost and 50,000 tons of shipping was destroyed, with a further 50,000 tons severely damaged.