During my search for traces of hair in the archives, one of the things that has really struck me are the beautiful images documenting hair and culture in the former British colonies in Africa. In my own life, childhood memories of my sister and female cousins struggling to keep still and braving the pain of the regular ritual of washing, de-knotting and plaiting of their curls abound. 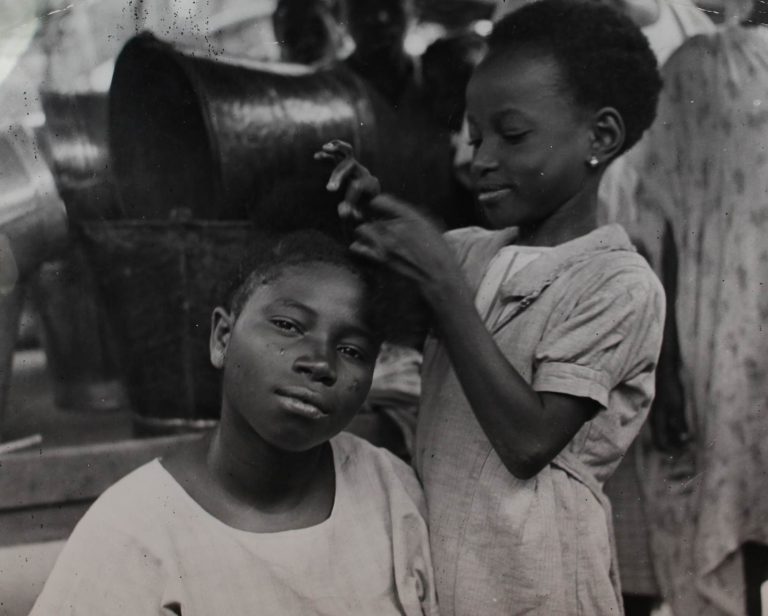 Similarly, I still remember (albeit rather hazily) the barber sculpting my high-top to perfection (it was the 80s, don’t judge me – at least it wasn’t a mullet!), or sitting down for what felt like hours whilst one of those Aunties that wasn’t really my Aunty, but whom I knew as such, plaited my hair in readiness for the week ahead. 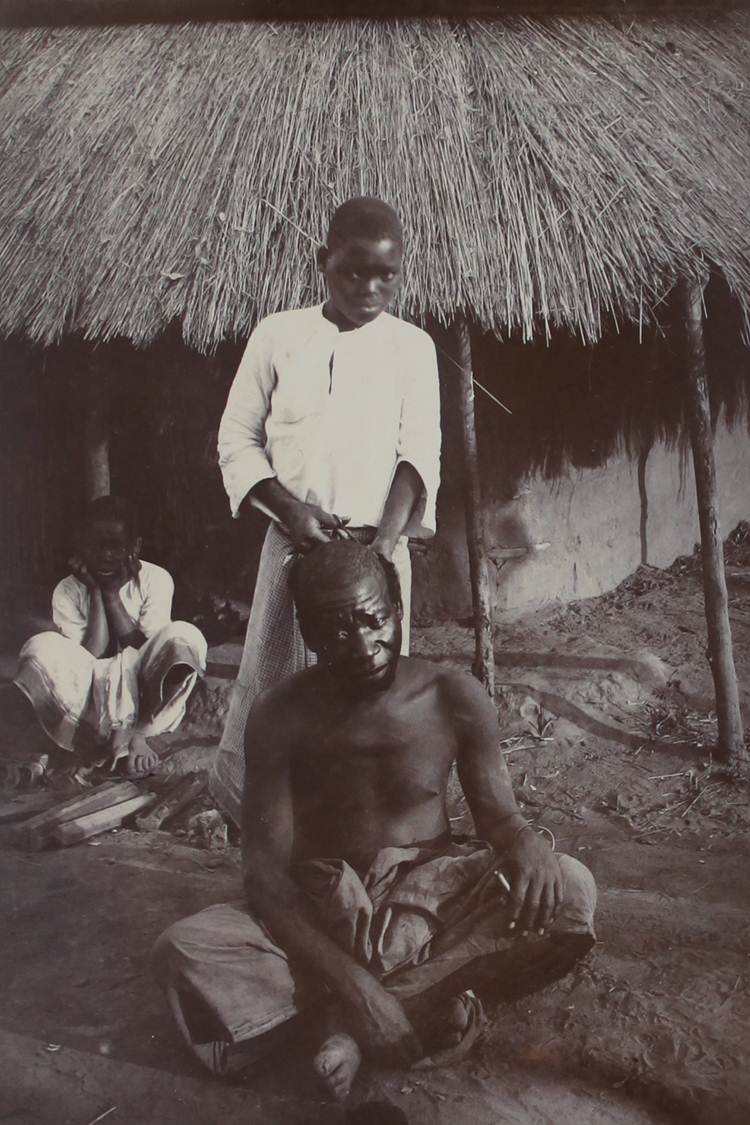 What I didn’t think about much at that tender age however, is the rich heritage which informed both the stylistic choices and the wider cultural milieu in which mine and my siblings’ hair-stories took place. Growing up, I don’t remember seeing many young boys cutting adult mens’ hair (as in the picture above), and I certainly can’t imagine my father entrusting his look to my junior-sized hands. What is interesting though is these things aside, how much cultural continuity there has been despite the ruptures of colonialism, the transatlantic slave trade and the ensuing migration of Africans around the globe. 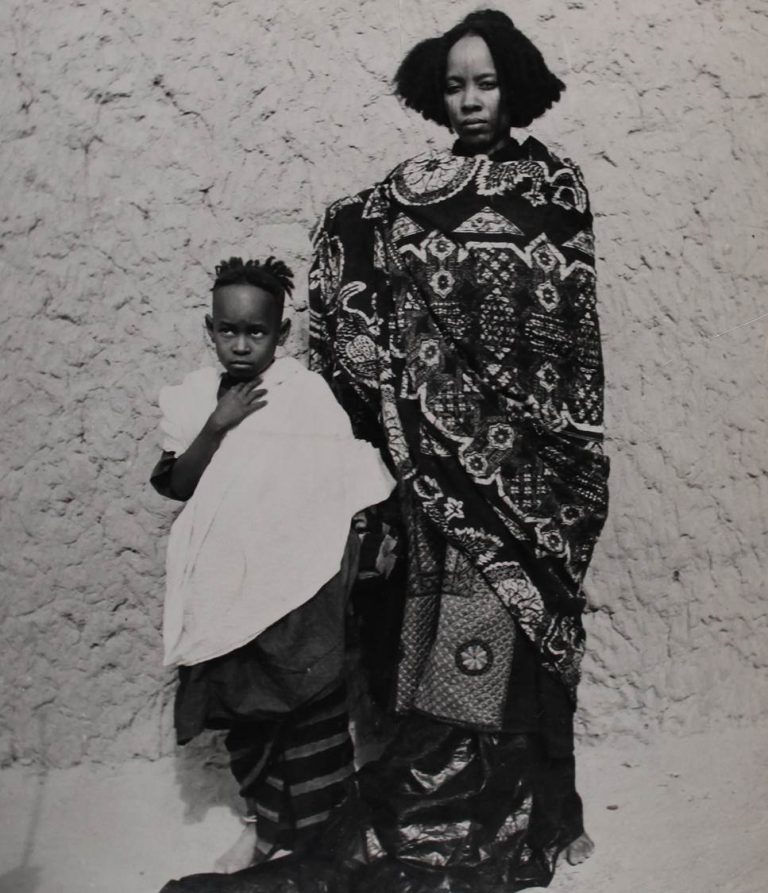 This picture is a perfect example.  Dated in 1955 and simply captioned ‘Housa dress’, the image was taken by the Central Office of Information; a non-ministerial government department tasked with generating government publicity and public information media until 2011 when it finally closed its doors. There are a wealth of images originating from the British colonies in this record series (INF 10) as a by-product of the government’s attempts to educate the British public on the climates, cultures and industries of its colonial and commonwealth holdings.

Back to the image in question. Whilst as someone of African heritage I find the context in which it is taken problematic – something I’ll begin to address a little further down the page – it also provides evidence of clear cultural and aesthetic links between then and (almost) now. Focusing on the child in the image, their hairstyle is identical to the ‘Funki Dred’ style popular on the UK’s city streets throughout the 90s, and championed by British music artists Omar, Soul II Soul and others. Even more interesting, to me at least, is that the style was for the most part attributed not to continental Africans, but to the Rastafarian movement originating in Jamaica. Viewing it in our present context then, the image encapsulates cultural migration across the Atlantic to the Americas and later, to the British Isles.

As I have alluded to above, it can be problematic to view these images purely for aesthetic value. As a product of  a cultural history, and colonial subjugation, these photographs can, and should, also be read from other perspectives.

Casting our minds back to my introduction of this blog series, I mentioned that the idea for a series of blog posts focusing on hair grew out of a school outreach workshop focusing on images from the former Colonial Office held here at The National Archives. Although aesthetics were discussed during the session, the probable power-relations between subject and colonial state was a central theme. This was largely driven by the young people who felt a sense of ‘unhappiness’ from those captured on film. This image of Kanari women being a case in point: 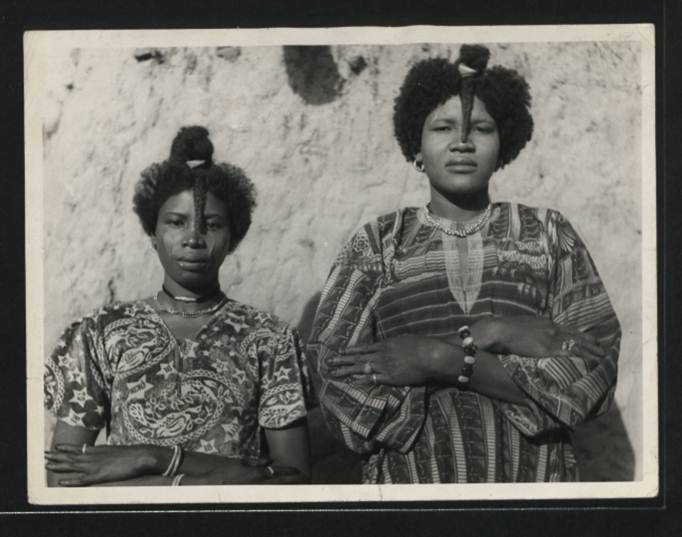 In the context of this blog series, it has been amazing to observe not just the follicular connections between people of African descent (like for example the images I found in the INF10 series of Fijians sporting Afros – CO 1069/652) but those that extend beyond racial and national borders. The ritual of personal grooming is one that occurs across the globe, and as such, one which we all can connect to regardless of our cultural backgrounds.

Stay tuned for the last installment where I’ll be showcasing some of the images which I didn’t quite manage to squeeze into previous blogs, but I feel deserve to be seen.