A Royal bundle of joy

With the birth of the royal baby expected soon, and the announcement from The Royal Mint that babies born on the same day would receive a ‘lucky’ silver penny, I was intrigued to see whether there were records showing examples of other commemorative gifts for royal births in history.

Looking through records here at The National Archives, I found a file from the Ministry of Food (MAF 99/627) relating to the commemorative food gift parcel given to mothers of babies born on 14 November 1948 – the same day as Prince Charles, HRH The Prince of Wales.

Contained within the file is correspondence from the Commonwealth Gift Centre, part of the Ministry of Food, to Buckingham Palace suggesting the idea of a food gift parcel for mothers of babies born on the same day as the royal prince. A reply was received from Buckingham Palace stating that ‘Her Royal Highness [Princess Elizabeth – now Queen Elizabeth II] thinks that this is an excellent idea and desires me to ask you to go ahead with it.’ 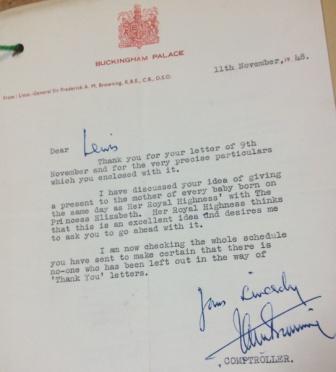 The commemorative food gift parcels sent from the Commonwealth Gift Centre were done with the help of the Women’s Voluntary Services, who did the sending of the parcels, and the Central National Registration Office, who scrutinised the birth certificates and application forms of those that applied. 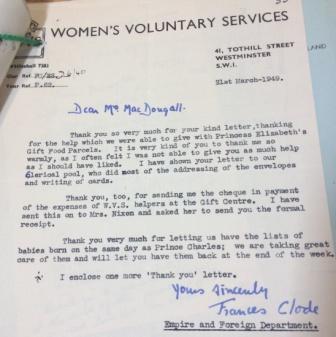 What was in the food gift parcel remains inconclusive from the record but there were lots of suggestions which included honey, marmalade, soap, butter, dried egg and even meat products such as bacon and beef. However, the documentation available suggests that there were issues with perishable items, as you can well imagine. The Registrar at the Central National Registration Office amusingly notes in his correspondence that ‘I have often wondered as to the contents of these parcels, but maybe it does not concern, mere man.’ 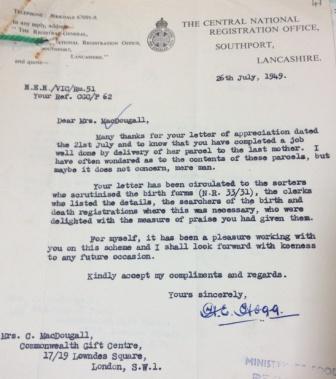 The correspondence in the file notes the issues there were with delivering the parcels within what was expected to take only a few weeks following the birth. The main problem was the number of births; they had anticipated 1,500 based on the average recorded in the UK at the time, but they received a grand total of 2,269 applications.

Interestingly, the current average in 2013 for the number of children born in the UK each day is 1,983, showing the extent of the baby boom. The Royal Mint are producing 2,013 coins for the royal birth in 2013 to ensure there are enough to go round.

The unexpected increase back in 1948 would have undoubtedly created a significant administrative issue, as one official from Buckingham Palace notes: ‘The trouble appears to have been that there were at least 1,000 extra babies born on 14th November than is usual in this country. It just shows the stimulus a Royal Birth has on the productivity of this country!’ 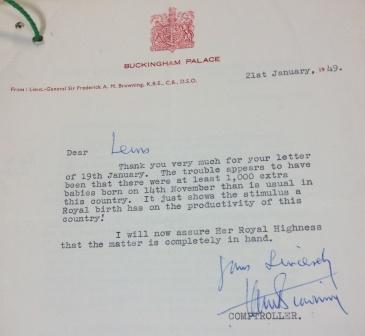 This huge administrative task which, although it took months rather than weeks to organise, must have been very gratefully received considering it was only four years after the end of the Second World War and rationing was still in place. The correspondence notes that the final food gift parcel was delivered to Mrs Tait in Scotland in July 1949. 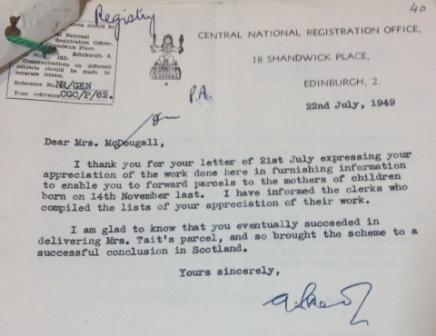 As the excitement builds over the next few days and weeks, you may like to see the historic celebrations surrounding the birth of Prince Charles as shown in the British Pathé video ‘Prince Charles is Born, 1948’ via The National Archives’ Education section.