Writer of the month: Ian Mortimer

Normally when historians are asked to talk about archives it is assumed that they will say how valuable archives are for their research. For surely the principal value of an archive is to supply information and to open up new avenues of historical enquiry? Of course archives do fulfil those functions. For example, one has very little idea of the private lives of Edward III or Henry IV from reading chronicles, which inevitably are based on public stories and perceptions. To get an idea of these men’s private lives we need to know the things they did which were not made public. For example, without the treasure of The National Archives we could never have learnt that, after arresting his archenemy, Sir Roger Mortimer, Edward III had him walled up in a cell in the Tower of London. Similarly, the chronicles say nothing about Henry IV’s reaction on losing his first wife. But we are touched by the evidence of one of his household accounts that gives intimate details of their lives together: his sending her presents of fruit and seafood when he was away from her attending parliament, and buying strings for her harp.

All this is well and good: it is the framework of all good historical narrative. However, I used the word ‘function’ above: to my mind, the principal value of an archive is much more than a matter of mere functionality, our ability to look things up. It is also the bedrock of the philosophy of history – not just the sum total of all the potential facts that we might tease out of the records but the full range of perceptions and connections of our own. This is because the written record, especially the non-literary written record is as near as we can get to seeing the actions of our distant forebears for ourselves. If you want to understand your ancestors you need to see them as alive, not desiccated bones, with all their prejudices and assumptions, fears, beliefs and commitments. You need to hear their voices. You need to appreciate their humanity. And that, of course, is not something one can do without appreciating one’s own humanity. We need to understand life in our own time to come to appreciate the meaning of the past, its similarities and differences. It requires considerable experience – that is why it takes years for a historian to mature, like a poet. If you want to change the world in your twenties, be a pop star. If you want to change the world in your thirties, write a novel. But if you want to change the world in your forties and fifties, be a historian. It’s that or politics. Only become a poet if you don’t care about changing the world until after you’re dead.

Through experience in an archive a historian can develop a direct relationship with the past. This is so much more valuable than a relationship through the medium of history books, which are all syntheses of fact and later opinion. In my case, I have only been inspired by two history books: Stephen Runciman’s History of the Crusades and Christopher Dyer’s Standards of Living in the Late Middle Ages. It is mainly life that inspires me, the direct connection with the past: rooms through which people walked and through which I too can walk, warming myself at the Elizabethan hearth on which so many meals were cooked, or touching the blade of a medieval sword on which so much pride and suffering was balanced. But the things of life are mute, resonant of actual events that normally exist only in our imaginations. What inspires me personally is hearing the actual voices of the past, and my direct relationship with the speakers, even though I might not know their names. That relationship is what allows me to see Mankind not as we are now but as we are, or have been, in many different times, or over a broad sweep of time. 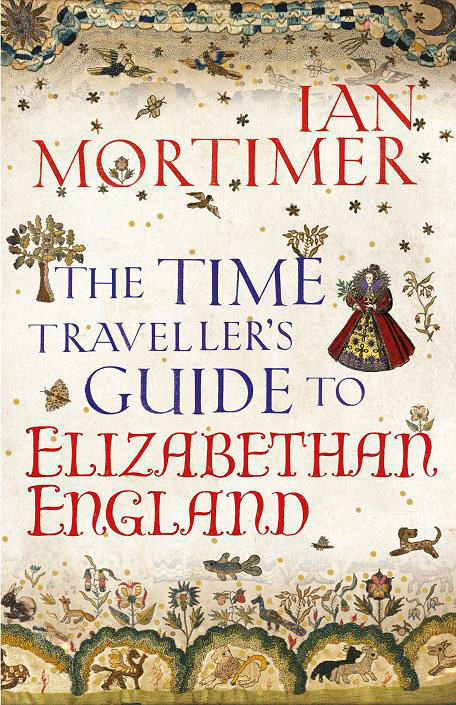 Forging a direct and personal relationship with the past requires archival research. I could not have written either of my Time Traveller’s Guides without considerable archival experience. This is not because I had to look everything up in archival collections; it is because I would never have had the confidence to present the past in a new way if I had not first forged my own personal relationship with the past, through listening to its real words, its voices, and appreciating its similarities and differences for myself.

As Chris Kitching wrote a few years ago, archives are ‘the very essence of our heritage’. I would agree, and go further. They are the key to forging a relationship with the past and thus to understanding humanity – not just as it appears in the newspapers of the present moment but across the ages.

Listen to or download the podcast of Ian’s talk at The National Archives:

An A-Z of Interesting Things about Elizabethan England

elizabeth i, england, events, medieval, talks, writer of the month