Brazil, the most successful nation, have retained the Jules Rimet Trophy since 1970 for winning the competition three times. They have since won the replacement World Cup trophy a further two times. Why can’t England play like Brazil; why does England always expect; and why is the World Cup more than just a football match?

In 1929 the Uruguayan Football Association asked the English Football League to send a team for a tournament during the summer of 1930. This tournament was to celebrate the centenary of Uruguay’s independence. This coincided with FIFA president Jules Rimet’s plan to stage a FIFA-organised World Cup in recognition of the success of football at the Olympic Games.

The Football League sent their apologies; they would not be sending a team to the tournament, now recognised as the first official World Cup Final. 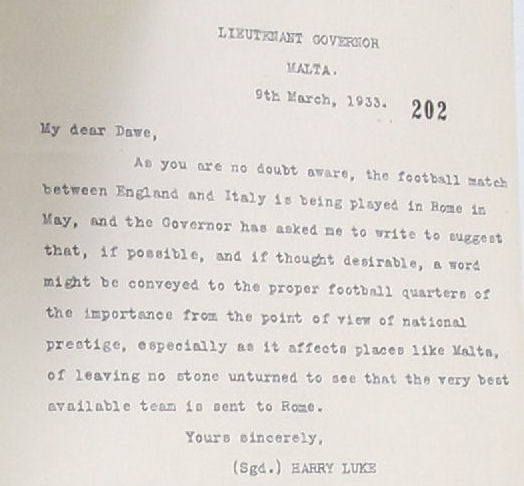 In 1933, the Lieutenant Governor of Malta sent a letter to the Foreign Office reminding them of the importance of ‘national prestige’, when the national team plays abroad (FO 395/492 folio 202).

In 1934, although England was not part of FIFA, they were invited to play in the World Cup, held in Italy. England again declined.

Italy beat Czechoslovakia in the World Cup final, and arrived to play England at Highbury that November. The English press dubbed the game the ‘real’ World Cup final. The Foreign Office had accepted tickets to the game (file 234/378: FO 372/3036), but were unable to attend the fixture ( FO 371/18420 file 6262).

England won the ill tempered game 3-2. The following day The Guardian ran the story ‘the Battle of Highbury’ and called for England never to play international friendlies again.

Throughout the 1930s the Foreign Office report on the bad behaviour of teams on tour. They also regularly remind the Football Association on the conduct of teams abroad, even refusing permission for teams to go on tour. West Ham were denied permission after requesting a trip to play Barcelona during the Spanish Civil War. 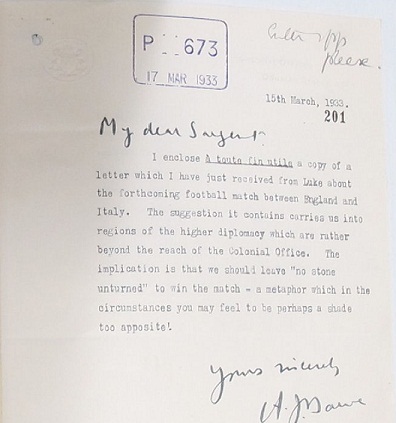 All these files could suggest the reason why England did not attend any tournament prior to 1950. It was not down to travel, distance or even the opposition. It was how England would be perceived if they lost. England did not want to fail at anything. Civil War in Spain, the financial crisis around the world, and the rise of a new power in Germany, meant England wanted to look and remain strong. Losing a football match to anyone was not on the agenda. In 1929 the Daily Express quoted the Foreign Office: ‘Play our first class teams on the continent. It regards it as essential that British prowess shall be well maintained’.

England entered the 1950 finals as winners of the Home Nations. England started a habit of a lifetime and struggled in the group stages. They lost 1-0 to both the USA then Spain, but did beat Chile 2-0. The Foreign Office reported on the performance of England (1950, AB1801 file), but unfortunately this file has not been retained. The National Football Museum holds the Boys’ Book for 1950 with an article by the manager, Walter Winterbottom, on England’s performance and why England could no longer be considered the best in the world.

The next finals in 1954 was a unique seeded v unseeded system, which saw England group winners having drawn and beaten the two unseeded teams. They did not play the other seeded team in their group. Uruguay sent England (4-2) home early that year.

The 1958 finals went to Sweden. England kept Brazil to a 0-0 draw, the first in any World Cup finals. They then lost the playoff to the Soviet Union. Arguably the greatest player ever, Pele, scored the winner for Brazil as they beat Wales 1-0 in the quarter finals.

Chile hosted the 1962 finals. England was the only Home Nation to reach the finals, and after struggling to second place in the group, were knocked out 3-1 by Brazil, the eventual winners.

1970 saw the Foreign Office more interested in Rhodesia’s participation in Mexico than England’s performance, (FCO 36/326). Rhodesia had declared itself independent from the United Kingdom in a move was declared illegal by Prime Minister Harold Wilson (PREM 13) and the United Nations Security Council.

Rhodesia applied to enter the 1970 World Cup. The Foreign Office objected to this, but Rhodesia had support from the secretary of FIFA, Sir Stanley Rous. Sir Rous had spent time and effort in ensuring Rhodesia could play in the qualification. The Foreign Office decided not to try and intervene.

In bizarre fashion, Rhodesia was grouped in the Asia Group 15a to play a two legged ‘group’ game against Australia. Both games ended as a draw, with Australia winning the ‘play-off’ 3-1. Israel eventually won the Asia group, but soon after left the Asian Football Federation. They are now a member of UEFA, and play in the European Zone. Also to note: this is the only year, to date, Argentina have failed to reach a finals.

Come on England, no pressure now 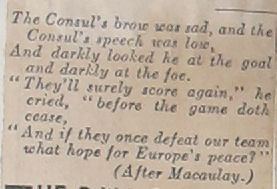 So what does this all tell us about England and why they fail to live up to the expectations of fans and press alike? That is always up for debate, but just remember the next time someone says: ‘don’t worry, it’s just a game’. Look back and think no, it’s not. It is more than a game; it is the pride of a nation, and the hope for the next generation. I’ll leave you with this extract from the Daily Express, 1929.