The working women’s struggle for the vote 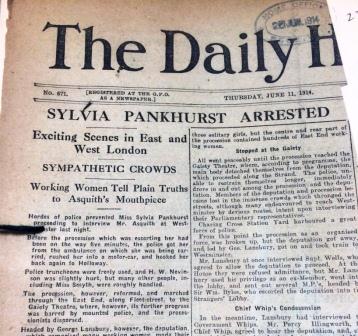 On 20 June 1914 one of the first deputations of suffragettes met with the Prime Minister Herbert Asquith. Contrary to the popular view of suffragettes it was a group of six working class women.

These women were part of the East London Federation of Suffragettes (ELFS) that had been annexed from Emmeline Pankhurst’s Women’s Social and Political Union (WSPU) for, among other things, its pacifist stance. The ELFS radically supported the vote for all men and women irrespective of class. Emmeline’s daughter Sylvia Pankhurst had founded the organisation to mobilise working class women in East London in support of the franchise, but also to campaign on other factors effecting women’s lives, such as working conditions and the realities of poverty.

A month previously Sylvia had been arrested under the Prisoners (Temporary Discharge for Ill Health) Act 1913, otherwise known as the Cat and Mouse Act, when attending a public procession from Bow to Westminster accompanied by thousands of federation members. Her police file from this time contains many newspaper cuttings including this one recording her re-arrest in The Daily Herald, edited by the sympathetic politician George Lansbury. Her time in prison was again marked by hunger striking. Her Home Office file, like so many others concerning suffragettes, constantly assesses her health, both mentally and physically.

At 11 am on 18 June 1914 the daily prison report notes: ‘Had a restless night, has had some retching, with a little blood-stained mucous, looks pinched, as she has had no food since the 10th instant further abstention is unadvisable”. 1 By 17.32 that day the Cat and Mouse Act came into force and Sylvia was consequently released to cheering crowds.

Typically Sylvia did not use this as opportunity to recover. After being given a little brandy and water she requested Norah Smyth to drive ‘with speed’ to the House of Commons, where against the requests of Kier Hardy Sylvia was to wait outside St Stephen’s Hall until Asquith consented to meet a deputation of women. 2 The scenes are dramatically recounted in suffrage history, Sylvia was weakened from her prison release, her face described as “pinched and sallow” as she lay across the doorway refusing to move. 3 Police surrounded requesting her movement, when eventually to her surprise Kier Hardy told Sylvia that the Prime Minister had consented to meet the deputation that Saturday, almost 100 hundred years ago to the day. 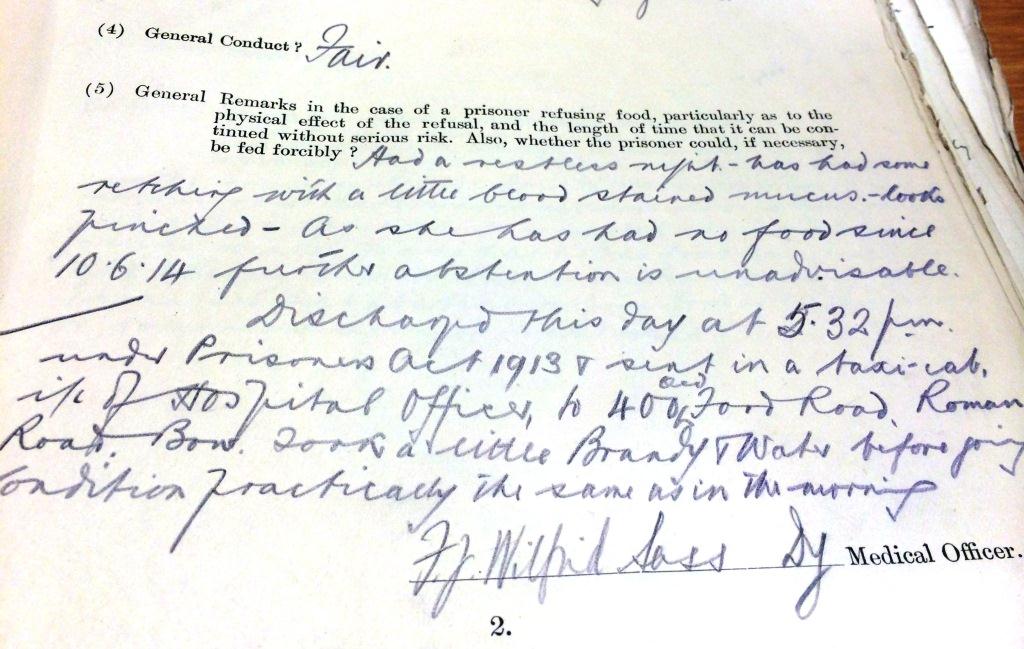 The deputation consisted of six working mothers, which differs from the mainstream view of suffragette societies. Sylvia herself chose not to participate and the women were chosen by the ELFS as representatives to tell the story of women from East London in their own words. The figures were Julia Scurr, Elsie Watkins, Jessie Payne, Mrs Savoy, Mrs Bird and Mrs Parsons, each with individual tales of hardship from their working life. Julia who led the deputation had been a ‘quiet housewife’ until 1905 and was now a Poor Law Guardian. 4 Arguing for women’s need for the vote she spoke to Asquith saying:

‘We want to say to you that, in our view, a woman attending to her home is as much a wage earner as if she went out into a factory, and that because women bring children into the world they perform the greatest of all services to the State, and they have the greatest of all reasons to desire to help in securing its welfare.’ 5

This was a unique opportunity for the Prime Minister to hear the voices of working women.

Although the impact of the deputation was limited it is still hugely significant. Very shortly after this the suffrage war time amnesty came into play; all suffragettes were released from prison and orders for capture under the Cat and Mouse Act suspended.

One of the great things about our records is that unlike other collections they were rarely chosen for the importance of the individuals concerned, but rather the importance of the series. The Metropolitan Police and Home Office files we hold concern a wide range of women (and indeed men) involved in the fight for the franchise as captured through their police altercations. One of my latest discoveries is a list of approximately 1000 suffragettes, including at least eighty men, as recorded in accordance with the war time amnesty of 1914. 6

This document highlights some of the lesser known women involved in the suffrage movement, including several associated with the ELFS. For example Zelie Emerson, an American known for her founding influence on the ELFS and work on their publication The Worker’s Dreadnought, and individuals such as Norah Smyth, the treasurer. Additionally Rosa Leo is also recorded; she delivered public speaking classes to fellow suffragettes including the ELFS, one of my favourite aspects of a movement that was truly designed to empower women. 7

In the mainstream view of twentieth-century suffrage this group often gets written out, however it also has a cult following for its idealistic activities. With Sylvia Pankhurst as its founder and Honorary General Secretary the group was created and run by working women, with branches in Bow, Bromley, Stepney and Hackney. With successes including creating a cost-price restaurant, a toy factory to create work and turning a pub from The Gunmakers’ Arms into the a nursery called The Mothers’ Arms, it is no wonder the ELFS have captured the historical imagination of many. 8 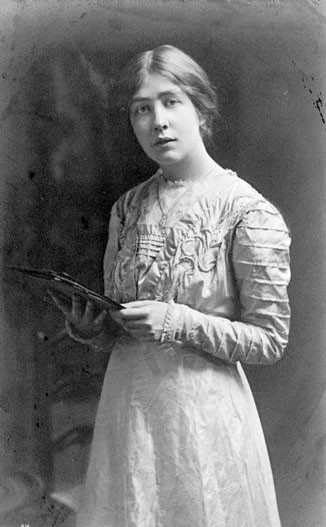 If my word count hasn’t done this organisation justice come in and have a look for yourself. Although this is providing just a small insight into the East London Federation of Suffragettes what I really want to emphasise is the diversity of suffragette stories we hold here, from suffragettes battling in their wheelchairs to an Indian Princess leading the Black Friday procession, the range is vast.

I am lucky enough to be volunteering as history lead for the East London Federation of Suffragettes Festival this August. This festival will be packed with tours, talks and workshops of these themes. If you want to know more about this fascinating suffrage organisation I would really recommend you attend!