The Women’s Land Army (WLA) was created in 1917, by the Board of Agriculture. WLA members, or Land Girls as they were more popularly known, were employed to meet the shortfall in agricultural labour caused by conscription of men to fight at the Front.

After the First World War the WLA was disbanded but was re-founded in June 1939 as part of the government’s efforts to mobilise the nation for war. At its peak in 1944 it had 80,000 members.

The National Archives has a vast collection of documents about the Women’s Land Army, including administrative files, examples of propaganda and a wonderful collection of photographs.

Land Girls wore a uniform including practical breeches, green jumpers and felt hats. This Board of Agriculture file (MAF 42/8) contains a sample, from the First World War, of an armlet issued to Land Girls. The file shows an order for 50,000 in June 1918 at a cost of £1,500. 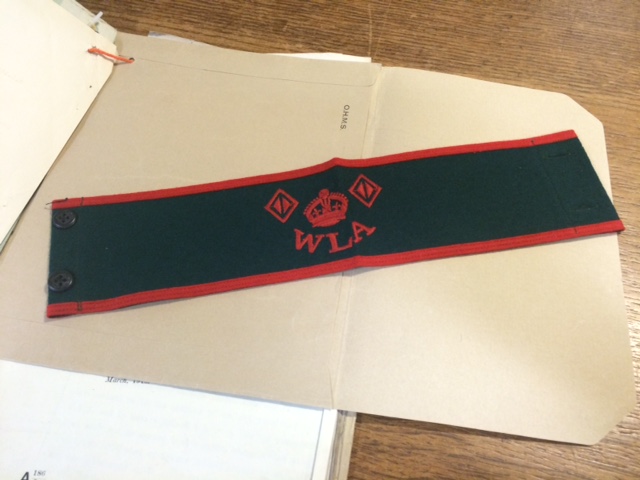 Government officials were always looking at ways to reward and encourage women – especially middle class ladies – to sign up. In the same file as the armlet (MAF 42/8) there is also a copy of the certificate given to women during the First World War for their part in serving their country. 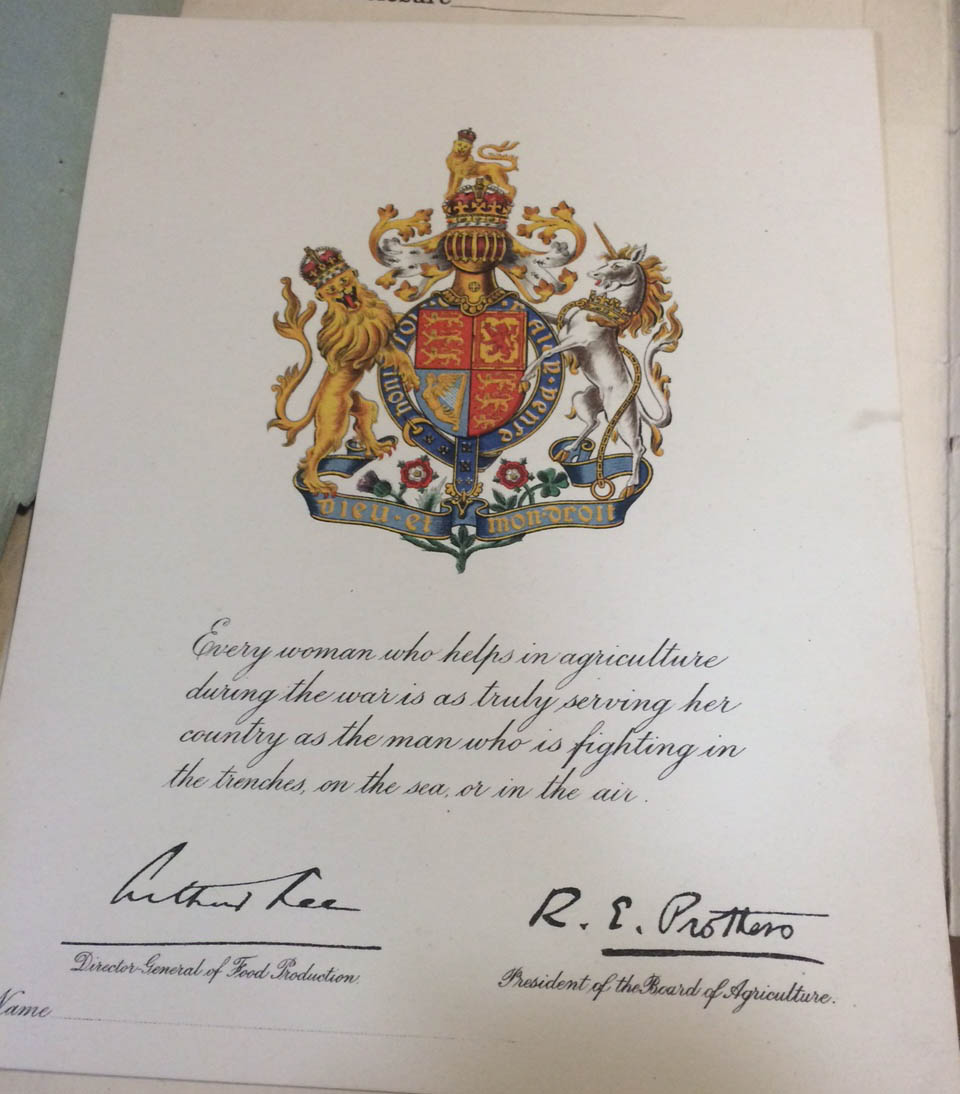 How to milk a cow

During the Second World War one third of the Women’s Land Army were from London and other large cities. As Jose Loosemore recollected as part of the BBC’s WW2 People’s War:

‘It was really quite wonderful how these town girls, never having seen milk other than in bottles on doorsteps…quickly learned’. 1

As you can see from this photo, girls were trained using artificial cows with fake udders. I would have thought a real cow would have been a trickier beast to manage! 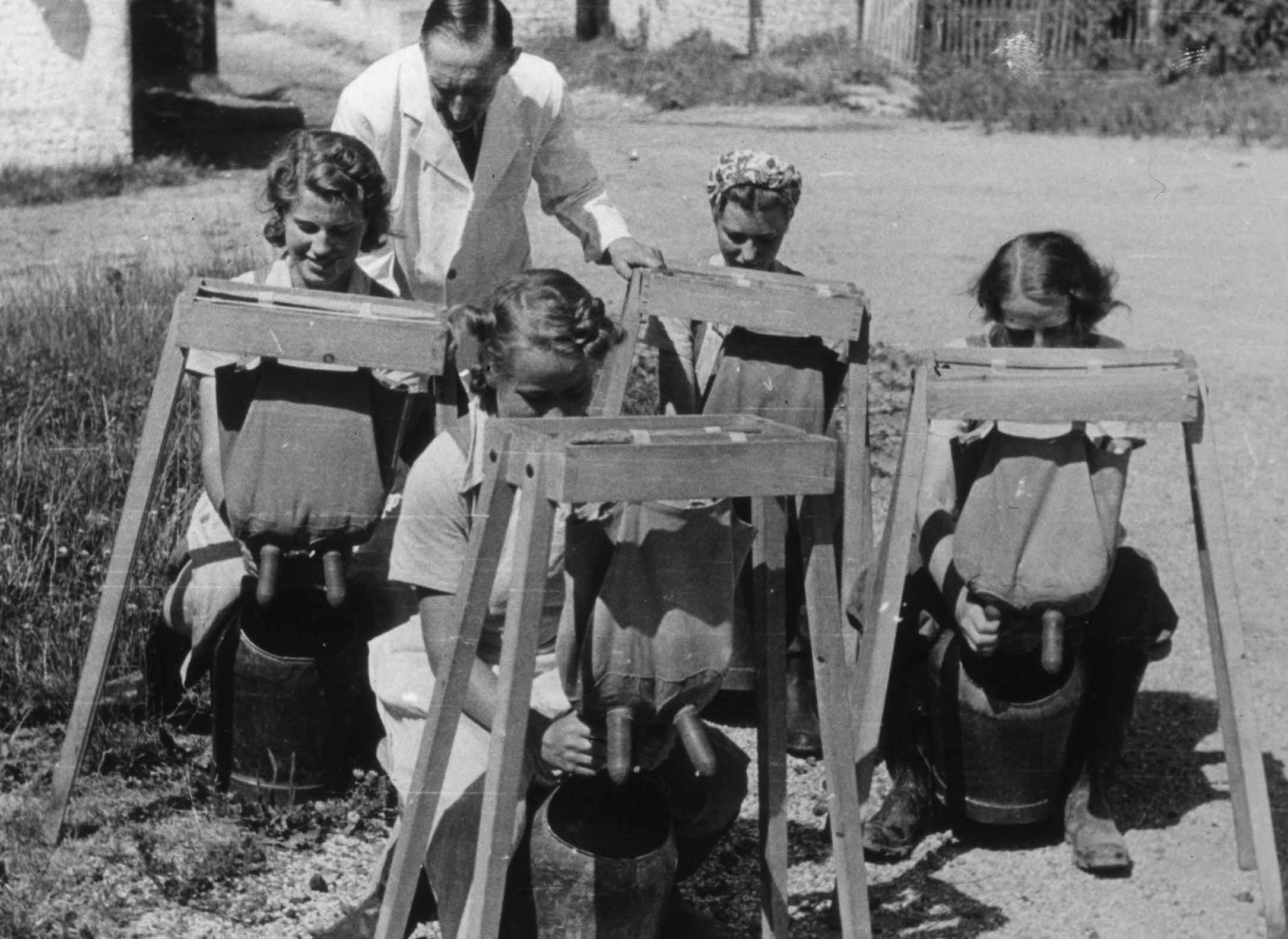 Jose Loosemore also recollects ‘another memory of these hectic days, which left a lasting happy impression on me, was the arrival at the farm institute of an official British war artist, the late Miss Evelyn Dunbar. She came to record on paint and canvas “women at war”. Several of her works now hang in IWM, of her studies of land girls, which she painted at Sparsholt. I am proud of the fact that a figure in the foreground of one is me as sweet 17 in my green/white dairy uniform rolling a churn across the dairy floor.’ 2

A quick search in IWM’s catalogue revealed the above painting, which surely must be the same one! Photographs here at The National Archives depict similar scenes, also above. 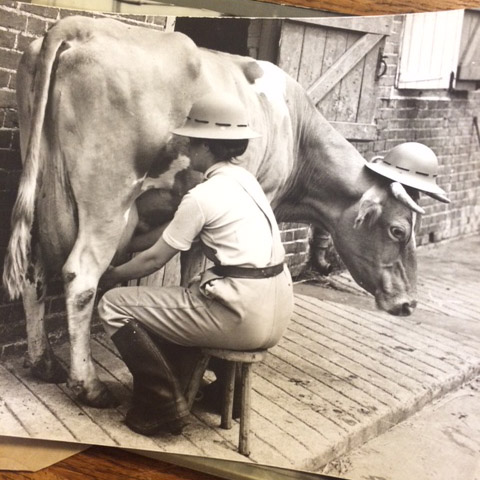 Tin hats for all!

As you may have spotted in the previous picture, the Land Girls were all wearing tin hats.

Issued in Southern England, the hats were to protect the women from flying shrapnel caused by home defences shooting down the flying bombs. As the reverse of one such picture said, ‘The Women’s Land Army are really ‘Front Line Girls’ (MAF 59/143).

The training Women’s Land Army volunteers received was varied. Some were fortunate to be sent to agricultural colleges for special training, others were placed on farms and some just got stuck in! Peace-time training wasn’t provided directly from the government, apart from tractor driving.

This file shows that at the beginning of the war a ‘go slow’ approach was adopted. 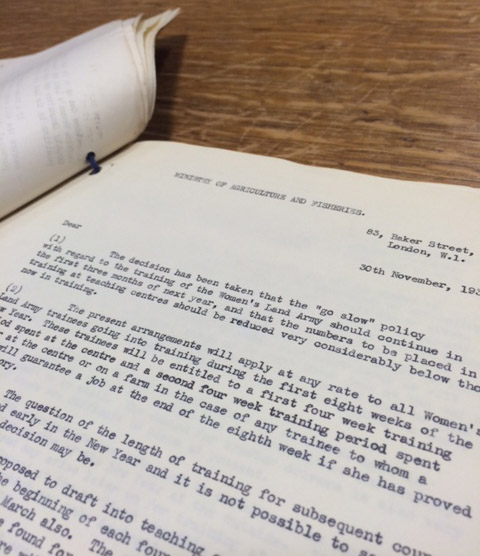 It was felt that training was not required immediately at the outbreak of war. Lady Denman, Honorary Director, of the Woman’s Land Army, was also concerned that peace-time training might put off volunteers as they would be discouraged by experiencing farm life, whereas in war time, they would be ‘more prepared to make the necessary sacrifices of comfort’(MAF 59/7). 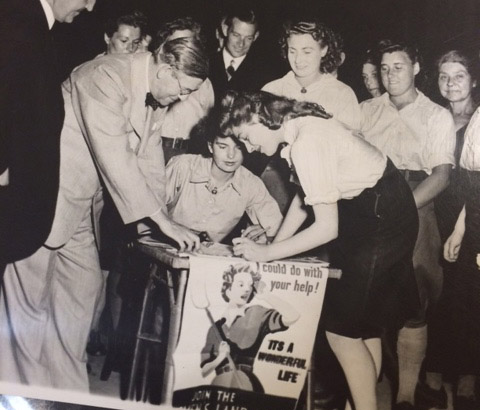 The Government learnt from the First World War that it was ‘desirable to set up a separate branch of the ministry, staffed by women, to deal with the problems which will arise in connection with the employment of women on the land’ (MAF 59/7).

County Committees ran all aspects of the WLA – uniform supply, supervision, training, recruitment, and propaganda. They had a budget for propaganda and produced leaflets and posters, were responsible for recruitment drives and sending information and publicity to their local press.

From chiropodist to front line

Within our collection of photographs there is sometimes wonderful detail on named individuals, such as Miss Heddle, seen here at the wheel of her tractor. 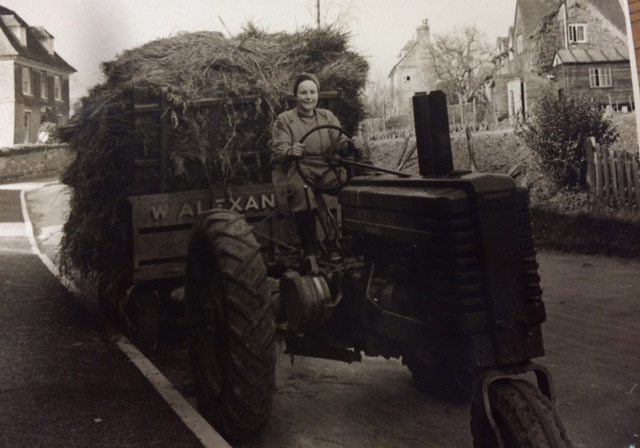 The caption on the reverse reads:

‘From chiropodist to front line. 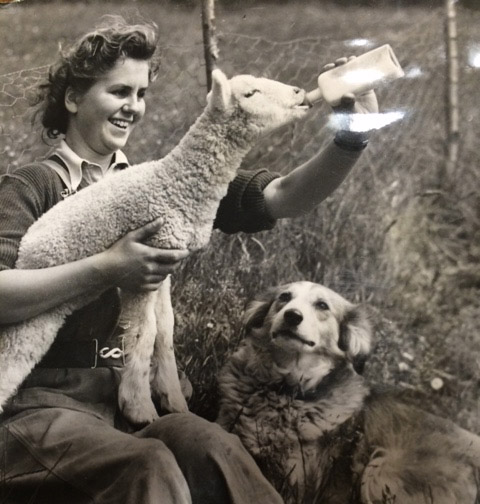 Records about the Women’s Land Army are available in our reading rooms at Kew. This research guide outlines what we have and you can also search in Discovery to find records held elsewhere. There is also a selection of photographs and propaganda material in our image library.

While researching the WLA I discovered the wonderful People’s War archive, containing first-hand accounts from hundreds of Land Girls. With such a wealth of information, it has been hard to do the subject justice, so I hope that I can cover some aspects, in more detail, in future blogs.

Although girls and women had different experiences and were motivated by different reasons, I felt an affinity with Hilda Dison who said:

‘My reason for joining the Land Army was because I loved the countryside and animals and wanted to help with the war effort’. 3