Women in engineering in the First World War

This blog post will highlight some of the early ‘everyday’ pioneers to show that, while it has not been without challenges, women have always been represented in the past of engineering. 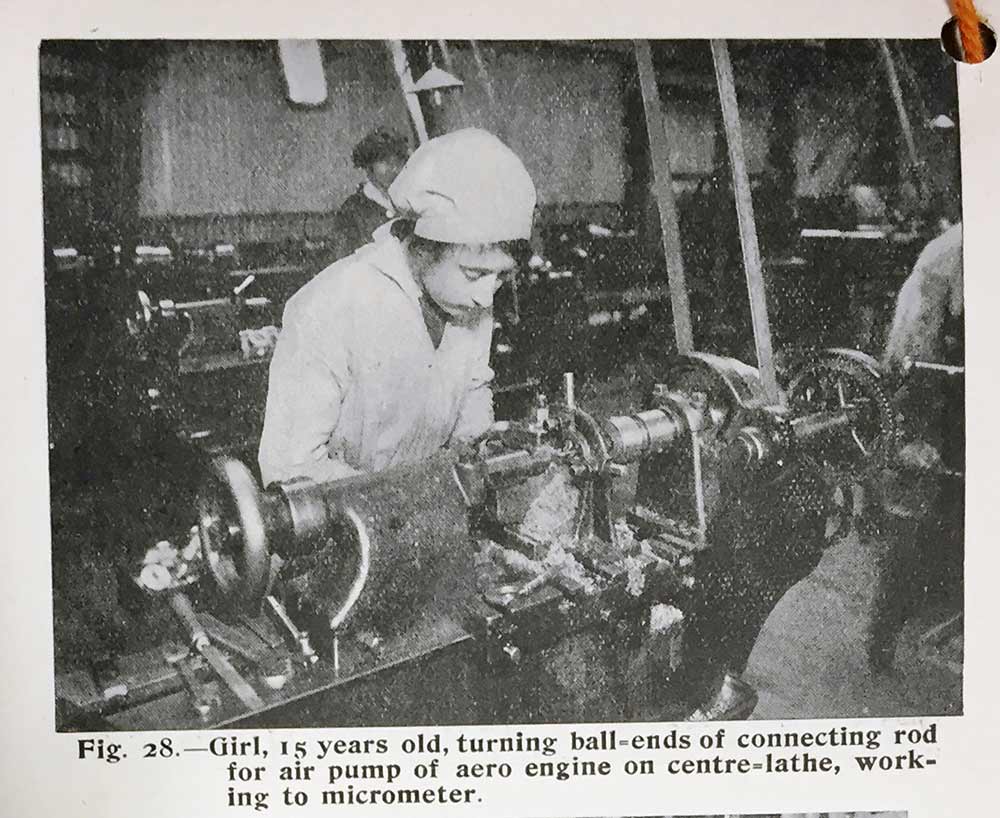 Women in engineering can be used as a new lens to view a cross section of women’s war work through The National Archives’ records. Women in factories engaged in engineering work, as did women in various military services – it cut across many of the fields of women’s work as it was so essential to delivering the many technological elements of the war.

In the early years of the war government contracts increasingly gave employment to women, but most often in industries in which they had already traditionally been employed. Gail Braybon notes that the ‘engineering industry was loathed to employ women’ in these early years. 1

However, as with many other trades, there was pressure from the government to free male workers for the front line. This particular document illustrates this by acknowledging:

‘There seems to be no reason why the engineering trade should not be asked voluntarily to make similar concessions’. 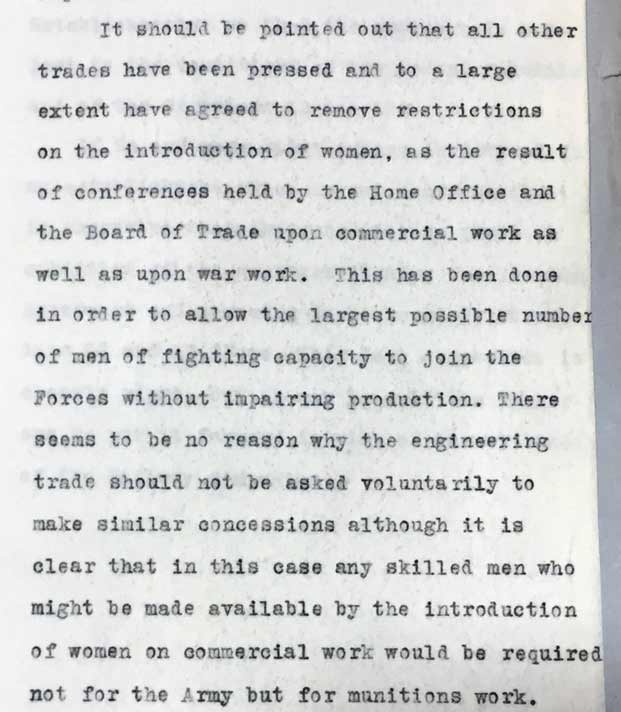 Notes on introduction of women on commercial work in engineering, prepared for conference with executive of Amalgamated Society of Engineers on 1 June 1916 (catalogue reference: MUN5/54/300/103) 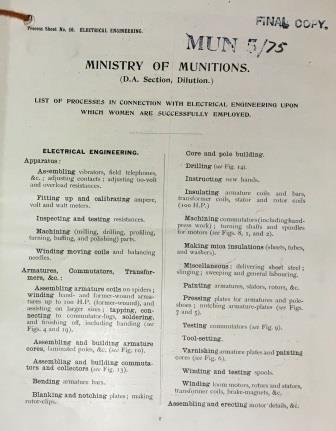 List of processes in connection with electrical engineering upon which women are successfully employed (catalogue reference: MUN 5/75)

One document particularly illustrates many of the industrial trades taken on by women through munitions work – for example listing the electrical engineering trades women were involved in.

Through this we get an idea of what women might have been working on day to day, and sample images of them doing so. However, we do not capture details of individual women.

Alternatively, we hold records of service for many women across the military services engaged in the First World War, from the Women’s Army Auxiliary Corp to the Women’s Royal Air Force. These records give glimpses into individual women’s service through the official eyes of government.

For women in the Women’s Royal Naval Service the records can be searched using rank, for example ‘engineer’ or ‘mechanic’. Ratings service records can be found in the records series ADM 336, you can find guidance to searching these records and the meanings in our guide to Women’s Royal Naval service records 1917-1919. Our records of serving individuals tend to capture the ‘everywoman’ experience rather than just the already well-known or traditionally heroic.

The experience of Gertrude Ethel Nicholls seems to be repeated in the records, as she is listed as ‘discharged WRAF’. This is repeatedly seen in the records. It is then possible to follow her service through our WRAF records, where she transfers her skills and becomes a mechanic. Through this record you learn more about her personally: for example, her height, build and hair colour. These records can be searched on our guide Women’s Royal Air Force service records 1918-1920. 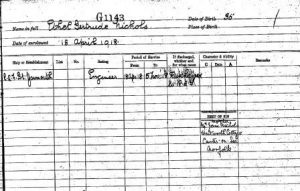 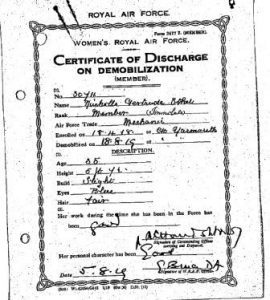 WO142/263 contains a document entitled: ‘Report on the work of women in connection with the anti-gas department’ which was written in January 1919 by a Miss Morgan, whose role was that of Lady Superintendent. Perhaps not what you would expect to find in a document where the first page contains this title:

Women were connected with the work of manufacturing respirators from the earliest days. The Women’s Emergency Corps ran shifts of women who undertook the role of packing respirators to be sent to France. Early in June 1915, the first official appointment of a woman in this industry was made, when one was appointed Superintendent at the Camden Laundry. At this time, the Camden Laundry was involved in drying and packing helmets which had already been impregnated with the appropriate chemicals for reducing the effects of gas used. On 10 July 1915, this woman and one other were sent to France to open repair depots at Abbeville and Calais.

When the work of making the masks for the small box respirator began in August 1916, one company in London (James Spicer and Sons Ltd.) engaged a number of educated women for inspection work, at the request of the Anti-Gas Department. These women wore a red uniform and were hence given the nickname of Redcoats. Inspecting the work done by the Redcoats was initially undertaken by Non-Commissioned Officers of the Anti-Gas Department, but eventually the best Redcoats were chosen, raised in rank and pay, put into uniform, and ultimately replaced the men. They were then known as Sergeants – although officially they ranked as Military Supervisors of Inspection. A Lady Superintendent was also appointed at this time, to be in charge of the Sergeants and Redcoats.

At the time of this report being produced, Miss Morgan reveals some figures which give an indication of the success that women had within this field. She states that:

Numbers of women who have been appointed in such roles (catalogue reference: WO142/263)

In the Anti-Gas Department factories, practically all of the work was undertaken by women. In particular, this can be seen in the manufacturing of nearly 50 million respirators, where women were involved in varying roles, from the making of components to the assembling and inspection of the finished article. The operations of machining, impregnating, drying, folding and packing were all carried out by women. With the exception of preparing the solution to impregnate the masks with, women were employed throughout.

The work of women employed in factories manufacturing vegetable charcoal was highly praised by those in authority. In the first gas masks of the First World War, it was initially found that wood charcoal was a good absorbent of poisonous gases. In about 1918, it was found that charcoals made from the shells and seeds of various fruits and nuts, such as coconuts, chestnuts and peach stones, performed much better than wood charcoal. These ‘waste materials’ were collected from the public in recycling programs to assist the war effort. With the exception of the chipping machine – on which they were never employed – women were used throughout on this work, though never in the same proportion as men. Approximately one woman to two men was the average.

‘Practically the whole of the work of manufacturing…has been done by women’ (catalogue reference: WO142/263)

The Women’s Royal Naval Service were also involved in the repairing of anti-gas respirators. In our collections we have a few examples of service records for ratings which state that they worked within this role. These belong to Jean Walker Craw and Florence Mary Morgan. Searching using the term ‘gas mask worker’ brings up further results in our catalogue. 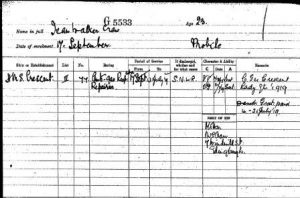 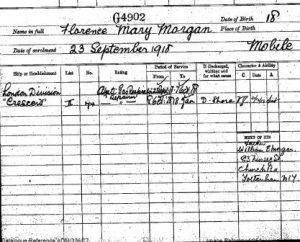