On 3 December 1867 John Davis was sentenced at the Warwickshire Assizes to 18 months’ hard labour for ‘wounding with intent to do grievous bodily harm’ (HO 27/148). His victim was Jane Ward. But what provoked this violent outburst? Apparently headless ghosts had entered his home through the chimney and tormented his family – but what has all of this got to do with Jane Ward?

She was a witch! Or more accurately she was branded a witch by her neighbour John and his family. Various newspaper articles found in the British Library Newspaper Archives give detailed accounts of his claims. He claimed she sent two headless ghosts in the dead of night down his chimney – not just any ghosts mind, one of them was the Patron Saint of Paris, Saint Genevieve. He was said to be carrying his head under his arm like a gentleman would carry a cane. 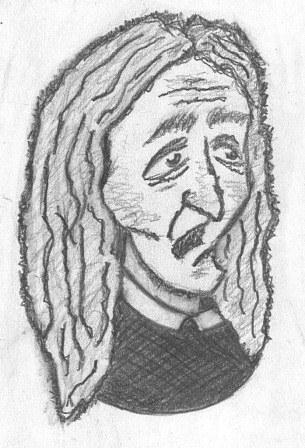 John Davis claimed they were not particularly pleasant ghosts. They weren’t like Casper the friendly ghost (they were more like his mischievous uncles) – they rearranged the family’s furniture and pinched members of the family. They also turned their attentions to Mr Davis’s disabled daughter, who was thrown off the sofa and then they tossed her around the room, before turning their attentions to the sofa which then suffered the same fate.

So what do you automatically think of when you hear the word ‘witch’? The first thing that automatically comes to my mind is Bette Midler’s portrayal of Winifred ‘Winnie’ Sanderson in Disney’s Hocus Pocus. Many people think of the stereotypical image of an evil haggard woman typically dressed in black who owns a black cat, flies on a broomstick and does her cooking in a caldron.The Oxford English Dictionary has four definitions of a witch, two of which I would like to draw on.

1. ‘A woman thought to have evil magic powers, popularly depicted as wearing a black cloak and pointed hat, and flying on a broomstick’

2. ‘An ugly or unpleasant old woman’

Now what do you automatically think when you hear the word ‘wizard’?

The first things that come to my mind are the fictional character Harry Potter, the legendary Merlin or the 70’s glam rock band. The Oxford English Dictionary’s definition of wizard is: ‘(in legends and fairy tales) a man who has magical powers’. It conjures up a completely different image to that of the definition of witch. 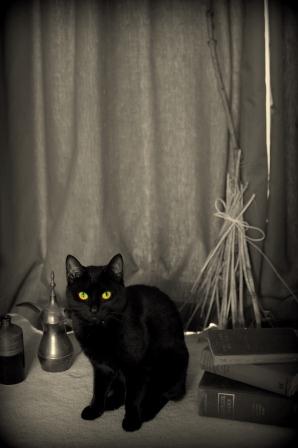 Mouse the cat posing as a witch’s familiar © Rachael Lloyd

It is not just the word ‘witch’ that is still stigmatized, black cats have been tainted too. They are often depicted in popular culture as being a witch’s familiar (a supernatural being that helps and supports a witch. Traditionally, a familiar is an animal, most commonly a cat). When was the last time you saw a witch with a ginger cat?

Historically it was a very dangerous thing to be branded a witch, as if the allegation was ‘proved’ it could result in her death. There were a few ways to determine if a woman was a witch, the most notorious one was the ‘ducking test’. A rope would be tied around her middle and her right thumb would be bound to her left toe, and she would then be thrown in to a pond or river. If she was guilty she would float, as her body would be in league with the Devil, if she sank she was deemed innocent. However, in some cases by the time she had been deemed innocent she had drowned.

There was and is in some cases huge stigmatization to the word witch that is not attached to the word wizard. Even today witch can still be used as a label or insult for a woman. However there are many women that actively identify themselves as witches and there are museums that are dedicated to celebrating witchcraft, such as the Museum of Witchcraft in Cornwall which holds an impressive collection of artefacts and looks at the different aspects of witchcraft.

So back to the court case of John Davis. He believed that to break the curse that Jane had put on his family he had to draw her blood, and once he had done this he would break the witchcraft. The night after the attack Davis claimed that it was the first time he had slept that soundly for months and he attributed this to the fact that he had broken Jane’s spell.

Jane appeared in the witness box, with her face still bandaged up from Davis’s attack. She stated that for about four months prior to the attack, which took place on 25 October, Davis had taken to calling her a witch every time he passed by her front door and other family members began to do the same. On the night of the attack two women, identified as Davis’s sisters, began to verbally abuse her near her front door. Whilst this was happening Davis ran out and struck her twice in the face, the second blow was with a penknife causing a wound just under her eye which was half an inch wide, and about two and a half inches deep. After the attack she tried to stem the bleeding with her apron, whilst shouting ‘murder’. At this point Davis’s sisters ran away.

Who was Jane Ward? My 3x great grandmother – unfortunately there are no known surviving photographs of her, hence the drawing done by Matt is (loosely) based on me and the descriptions of her in the newspapers.

At present I am unsure of Jane’s fate, the only thing I do know is she survived the attack, as the last time I can identify her in the records is on the 1871 census (RG 10/3206). One day I hope to discover what happened to Jane. After the attack my hope is that she was able to live out the rest of her life free from the stigmatisation of Davis’s accusation, in relative peace.