‘Winston…was complaining of a slight headache’

I never cease to get a sense of excitement from opening newly-accessioned files for the first time. Occasionally, documents released to The National Archives will fundamentally change our view of history, but more often, they add colour and fill in the blanks to events and personalities with which we’re already familiar.

Today’s release of almost 500 files from the Foreign Office’s Permanent Under-Secretary’s Department (PUSD) is a good case in point.  Among the papers, is an extraordinarily entertaining account of ‘Operation Bracelet’, Winston Churchill’s August 1942 mission to Moscow and first face-to-face meeting with Stalin. 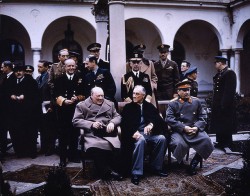 Churchill, Roosevelt and Stalin at the Yalta Conference in February 1945 (catalogue ref: INF 14/447)

The meeting came at a crucial point in the war and Churchill was there to inform Stalin of Allied plans for the invasion of North Africa (Operation Torch) as well as delivering the bad news that there would be no ‘second front’ in Europe. Accompanying Churchill on the trip was Sir Alec Cadogan, Permanent Under-Secretary at the Foreign Office, who later relayed his take on events in a letter to Viscount Halifax (FO 1093/247).

Churchill had apparently been ‘delighted’ with his first meeting with Stalin, but at the second, Stalin confronted them with an ‘aide-mémoire’ which was, according to Cadogan, ‘as sticky and unhelpful as could be’.

‘This threw rather a cloud on the party, which was not dispelled by the banquet the following night. Nothing can be imagined more awful than a Kremlin banquet, but it has to be endured. Unfortunately, Winston didn’t suffer it gladly. However, next morning, he was determined to fire his last bolt, and asked for a private talk, alone, with Stalin.’

The scene was set for final meeting between the two wartime leaders. At around 01:00, Cadogan was summoned to Stalin’s private rooms in the Kremlin. He described the scene that greeted him on arrival:

‘There I found Winston and Stalin, and Molotov who has joined them, sitting with a heavily-laden board between them: food of all kinds crowned by a sucking pig, and innumerable bottles. What Stalin made me drink seemed pretty savage: Winston, who by that time was complaining of a slight headache, seemed wisely to be confining himself to a comparatively innocuous effervescent Caucasian red wine. Everyone seemed to be as merry as a marriage bell’.

The evening eventually broke up some time after 03:00, leaving Cadogan just enough time to get back to his hotel, pack his bags, and leave for the aerodrome at 04.15.

Despite his slightly irreverent tone, Cadogan knew that the talks had had important results:

‘I think the two great men really made contact and got on terms, Certainly, Winston was impressed and I think that feeling was reciprocated…. Anyhow, conditions have been established in which messages exchanged between the two will mean twice as much, or more, than they did before’.

The meeting left Churchill in a good position to act as broker in the Grand Alliance with the USA and USSR that ultimately decided the fate of the war.

But Churchill was not the only person to experience high jinks in the court of the ‘Red Tsar’. Later that year, information reached ‘C’, the Chief of the Secret Intelligence Service, Sir Stewart Menzies, from a ‘trustworthy channel’ concerning the US politician Wendell Willkie’s tour of Russia (FO 1093/238)

‘Willkie…made a great impression on Stalin, and the reverse is certainly the case…Willkie showed great interest in the new Russian sub-machine gun…At Willkie’s request Stalin sent somebody to bring in a specimen, and within five minutes, one was brought in. Barnes was very nervous, because by this time everybody was in a high state of intoxication. He gives full marks to Sir Archibald Clark-Kerr who gracefully took the gun out of Voroshilov’s hands and span the drum to make certain it was quite empty before handing it to Willkie. A banal and drunken incident followed when Cowles placed an apple on top of his head, Willkie aimed the gun and pressed the trigger, and Cowles jiggled the apple of his head. At this everyone laughed, and Stalin said: ‘You know you ought to be careful carrying a machine gun in the Kremlin’. Willkie replied: ‘Why should I care? It isn’t my apple’. Stalin laughed so much, he almost rolled off his chair’.