What’s in a name?

Working on the Traces through Time project has meant spending many months staring at long lists of names. So much so that I feel I know many of the people who served in the First World War, especially those appearing in our Admiralty and AIR series.

Traces through Time is all about linking people’s records together, and the more unusual someone’s name is the more confident we are that two records containing that name are referring to the same person. So, wonderful names like Sylveanus Jinkins Orford and Fawcett Hagbert Bugge seem as unique as a set of fingerprints, at least for a generation or two. However, names don’t necessarily need to be unusual to make them unique; some people just have a lot of them, like Albert Edward Christian George Andrew Patrick David Wright. Of course rare names don’t necessarily signify uniqueness – of the 13 Spreadboroughs who served in the Royal Navy during WWI, two were called Bertie and a third was called Herbert. Without taking into consideration other information, we could easily fall into the trap of thinking they are one and the same.

When I think of names in our catalogue I like to think of what is recorded there as being the result of a chain of events in the lifetime of the record. I imagine recruitment offices as rather loud and busy places full of people with a wide variety of names, all having different ways of spelling those names, and pronouncing them in accents which may not be easily understandable to the recruitment officer filling in the application form. No more is this exemplified than by Frithy of Heaton Cooper who sounds like an aristocratic friend of Bertie Wooster, but was actually called Frithiof.  Is it any wonder that Walter Henry Heard was also recorded elsewhere as William Henry Heard (perhaps Mr. Heard was misheard), or that Robert William Franklin is called Albert in another record? It may be that Albert is his middle name, but there is a definite pattern of substituting names beginning with the same initial, or with a similar sound appearing in different records (Edward for Edgar or Edwin, Herbert for Harold, and so on). 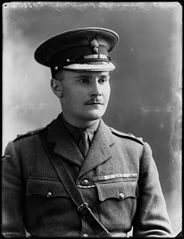 One nice example of this phenomenon is the case of Bernard Cyril Freyberg, 1st Baron Freyberg, who is variously recorded as Bernard Cyril Freyberg, Bernard Cecil Freyberg and Bernard Cyril Freyburg. Actually if we look at the penultimate page of his Royal Naval Record of Service we see the crossing out of Cecil and the replacement with Cyril. This was not reflected on the typed record card which was eventually transcribed to prepare data for The National Archives’ online catalogue, Discovery. Here we have an example of not only an incorrect middle name but also a misspelling of the surname (also corrected in the penultimate page of the record). Spelling differences open up a whole can of worms, and how we deal with them to improve the find-ability of these records is right at the centre of Traces through Time. I will save that for a later blog.

What else can we learn from exploring names? Well if we bring in the date of birth we see some nice patterns emerging. Over half of Valentines are unsurprisingly born on 14 February, and we also find a large proportion of Noels born on 25 December, Guys on 5 November, a spike of Patricks on 17 March and you can probably guess in which month a third of Mays are born. The months of March and April seem to produce more Violets and Roses than other months. A special mention must, as we enter December, go to those with the forename Christmas. I found 20 Christmases in ADM 188 and only 11 were born during the Yuletide period. Perhaps it is Christmas all year round in some households. Take James Christmas Palmer, for example, who was born in June 1852 and joined the Navy as a boy in 1868. Which ship was he assigned to? H.M.S. Reindeer of course. We also have the brilliantly named Christmas Holliday, born in November 1900. His parents were obviously looking ahead to a festive break. 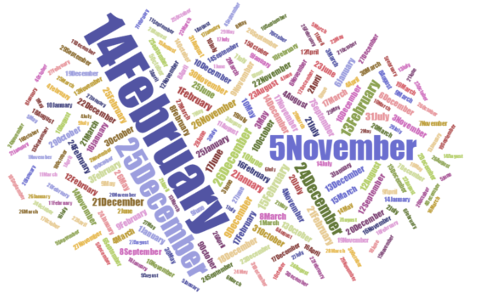 A wordcloud showing dates of birth for men named Valentine, Noel and Guy – the bigger the text the more common the date

What I found particularly interesting about the relationship between names and date of birth was the correlation with other events. More boys named Jubilee were born in the summers of 1887 and 1897 than at other times, and the latter year was also a popular time to name your daughter Victoria, as was 1899 when the Queen turned 80. It is the Boer War which really appears to have caught the imagination of parents though, with names such as Mafeking, Dundonald, Baden, Powell, Kimberley and Pretoria becoming popular around the times of major victories.

I do wonder in more modern times whether similar patterns would emerge. Did the Falkland’s War create a new generation of Scotts or Stanleys? Perhaps the current popularity of Scandinavian television dramas will give us a famous Hagbert to inspire parents. It wouldn’t surprise me if 2012 brought renewed popularity for Elizabeth, but did Jubilee have a resurgence too?

And if you find yourself naming a baby near the end of the month… do at least consider Christmas.