PRO 23 is an historic collection of moulds taken from wax seals held by The National Archives. Containing more than 7,700 items, the collection was manufactured to enable the production of seal replicas. Since 2015, work has been underway to understand this unusual collection and to find ways to make it accessible. But how did the cataloguing and digitisation of the seal mould collection come about? How did we go about finding a new way to utilise the collection?

In 2013, several colleagues retired, taking with them most of what was known about the moulds. Discussions began around how to retain this knowledge. We held some handwritten information, but that was in a poor physical state and, as such, vulnerable to loss. It was apparent that, if the collection were to be used in any significant way, cataloguing it was advisable. 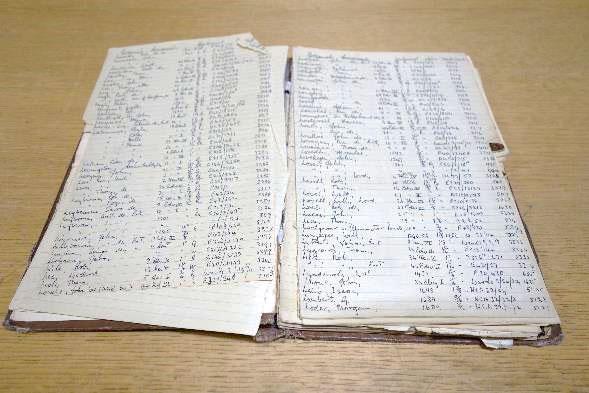 I scoped a data retrieval project, to create a useful, functional record of the resource for those interested in seals research. I wanted to be certain that any data captured would be useful to those interested in seals.  Working with colleagues from other teams, we looked at what information it would be useful to capture, how to ensure that it would relate to existing research resources, and how to produce something that might be compatible with our online catalogue – Discovery – if we wanted to unify the two in the future.

We designed an Excel database that captured

Data input was undertaken by volunteers. As the project progressed, several previous (incomplete) attempts to catalogue the collection were uncovered. We absorbed them into the database, making it the most comprehensive set of data on the seal mould collection, and creating understanding and access where little had previously existed.

Once the data retrieval was completed, I explored ideas around what to do with the collection and associated data. One possibility was to digitally image them and present them in Discovery. Digitising objects and presenting them in Discovery had never been attempted before, so I began to look into the feasibility of marrying the database with the images.

We determined how to capture metadata and how to understand what protocols should be observed. We also made sure the images would be compatible with existing processes and determined the availability of support going forward.

I ran numerous image tests to identify how to produce the best visual result. Photography was quickly rejected – the variety of sizes, colours and textures of the moulds meant that producing a good output would require continual adjustment of camera settings and was, therefore, too labour-intensive. 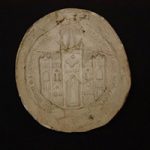 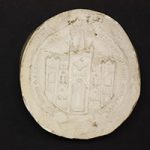 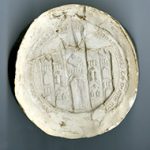 More sophisticated methods, such as 3D scanning or Reflectance Transformation Imaging, were likewise rejected. The need to retain a visual record of the entire mould was not necessary – only the impression itself was of interest. Also, these methods could be time-consuming, costly and require a level of expertise we did not have at that time. Scanning on a simple flat-bed scanner proved quick and highly effective, so we ran further tests to determine what the standard for output ought to be. 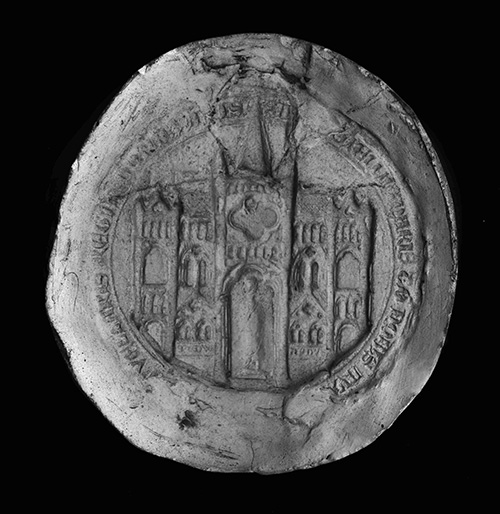 And this is the end result. The best result was produced when moulds were scanned in greyscale. They were also scanned at 800 dpi – a higher resolution than the standard 400 dpi required for flat documents. As the image is compressed in order to be displayed in Discovery, this ensured that it retained a very high degree of image quality. It was then retouched in Photoshop – the mould is a negative impression and needed to be inverted.

Brightness and contrast were adjusted to give the best ‘read’, and any discolouration that interfered with the image was removed. 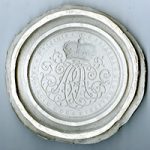 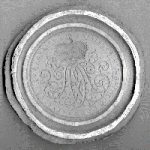 Now that the working methods had been determined, a small batch of images and data were brought together in the Discovery test site, where we were able to see what the finished product would look like. The result exceeded expectation and justified the effort that had been put into the project thus far. 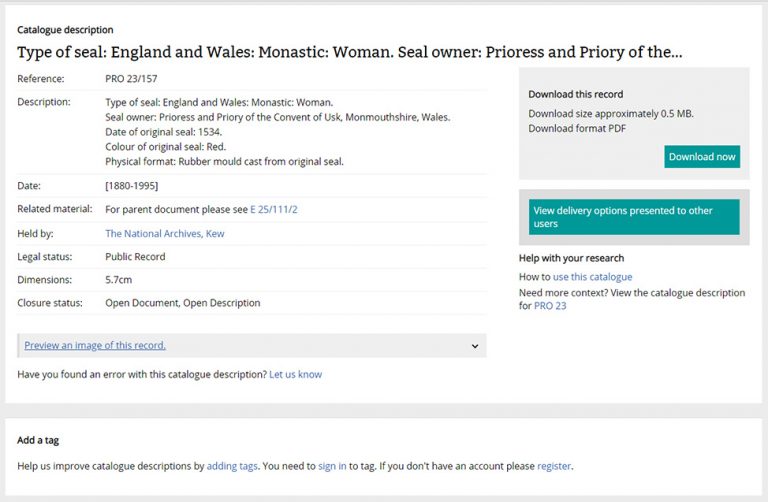 Having worked with volunteers to build the database, it seemed logical to continue working with them on the digitisation of the collection. A team of seven joined the project. They have undertaken all of the scanning, retouching, metadata creation and quality assurance. In July 2017, our first batch of 600 images went ‘live’. So far, over 3,000 moulds have been scanned, with more than 1,800 images made available in Discovery. We are adding to this number all the time. 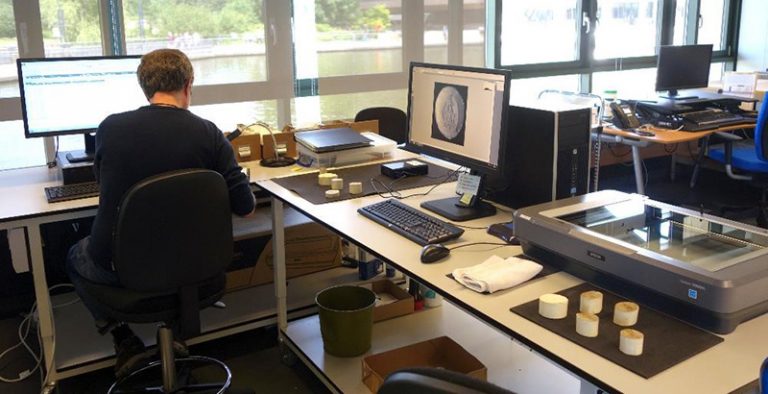 PRO 23 is a unique collection, which provides an insight into wax seals at The National Archives.  Each seal is individually described, providing as much information as possible. All terms used are fully searchable, and compatible with the existing Seal Card Index. Alongside this data is a high-resolution image. The image viewer enables the user to expand the image, or to zoom in, allowing small details such as text or heraldic devices can be viewed. They can also be downloaded as a PDF. The PRO 23 entry also provides a hyperlink directly to the parent document catalogue entry: if  a reader wishes to order the original, they are able to do so.

This project has been five years in the making and the journey from drawer to Discovery has had its challenges. However, I have been very fortunate that so many colleagues have readily lent their expertise, and helped make it happen. This is a truly collaborative piece of work, demonstrating the breadth of expertise at The National Archives, and the commitment of the volunteers who work tirelessly to make this resource available to anyone with an interest in seals.