These diaries  1 reveal stories about the advances in technology that made it the world’s first industrialised war. Many mounted troops went into battle at the start of the war on horseback with swords, and ended the war with machine guns and tanks.

The stories in the war diaries highlight the use of simple yet effective tactics – such as ‘dummy soldiers’ operated by strings – alongside the introduction of more advanced twentieth century technologies such as the first (German) flamethrowers and the first (British) gas attacks.

There is a chilling account in war diary WO 95/1864 of one of the first uses of flamethrowers at Hooge on 30 July 1915, which describes the use of ‘liquid fire’ by the Germans in the trenches:

Given these tactics, advancements in technology and the increasing threats, suspicions were heightened – even extending to cats and dogs that were believed to be working for the Germans, as shown in this intelligence report:

The report reveals the level of suspicion amongst military units at this time. Every detail was of potential importance for the planning of further operations, and so every possible suspicion would have been reported. The war saw new weapons, new tactics and new methods of conducting warfare, some of which were unimaginable a few years before. While the report about the cats and dogs is a less serious example, it shows the very extreme experiences of the time in the front lines.

Another intelligence report a few days later notes an attempt by the Germans to taunt the allied troops by sending a brown paper kite into the trenches with this message: 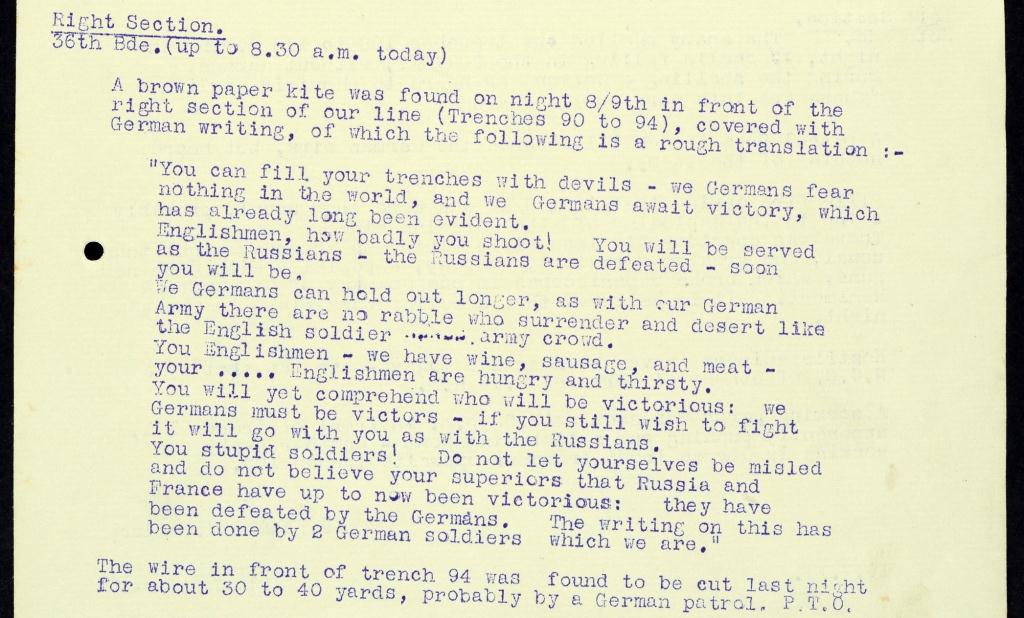 Also included in this batch are records of other nations that joined forces to fight on the Western Front.  The Indian Cavalry were the first troops from the Commonwealth to join the British Army, with first actions in the autumn of 1914. Within war diary WO 95/1157 there is an amazing account of mounted troops with swords fighting against machine gun fire. It notes an incredible incident with Lieutenant Broadway who killed two Germans with a sword when he was ‘treacherously killed by a revolver shot by a German officer, who raised one hand in token of surrender keeping the other behind his back’. The German officer was killed immediately afterwards by a lance thrust from one of Broadway’s troops.

This release is part of Operation War Diary, – a joint online crowdsourcing project between The National Archives, Imperial War Museums and Zooniverse. It has now been running for eight weeks, and incredibly over 10,000 people across the globe have already volunteered, tagging around 50,000 names, places and activities in the first 200 war diaries. This is the equivalent to someone working 40 hours a week for four years – an amazing achievement! But we’ve still got some way to go to tag the thousands of diaries so I’d encourage everyone to sign up to Operation War Diary to be part of this important part of history.

Don’t wait to be called up – go straight to the website to take part in Operation War Diary now.