A victorious army in the making: Raising King Henry V’s army of 1415

It is 600 years since King Henry V’s army assembled on the southern coast of England to set sail for the French coast in pursuit of their sovereign’s claim to the French crown. The military expedition to France in 1415 opened a new phase in Anglo-French hostilities that had persisted sporadically for nearly a century; a symptom of a rivalry between the two kingdoms that was much older.

Henry had much to prove, not only to his French enemies but also to his English and Welsh subjects as his kingdom had been plagued by rebellion and conspiracy making his position tenuous.

He could however rely on a sophisticated system for raising his army that had been developed under his predecessors. Raising an army in late medieval England was no mean feat and through the paper trail of various administrative records held by The National Archives we will see below how Henry’s soldiers were recruited and paid.

Below is a record of an indenture of war between the crown and Sir James Haryngton sealed on 29 April 1415 found in E 101/69/3/361. Indentures of war were contracts drawn up between the King and fellow earls, knights and esquires who were to raise a stipulated numbers of men at arms (armoured and mounted soldiers) and archers. These records are mainly found in the records of the Office of Exchequer in series E 101 and are name searchable on our catalogue Discovery. The majority of these contracts are written in French, the language of the aristocracy and the Royal court.

Sir James’ indenture also reveals the standard rates of pay of the period that he and his men were to receive per day which was two shillings for himself; 12 pence for each man-at-arms and six pence for every archer (catalogue reference E 101/69/3/361)

Indentures were sealed for a total of 290 retinues who were to assemble or muster in and around the port town of Southampton by 1 July as their indentures would specify.

At Southampton army leaders and their retinues would receive their first quarterly instalment of wages, issued by a clerk of the Exchequer who would record the names of individual soldiers to calculate wages should recruitment levels fall short or excessive amongst the retinues. These records created are known as Muster Rolls or Retinue Rolls providing the names of soldiers that comprised the entire army, several retinues or a sometimes a single retinue. Many of the Muster or Retinue Rolls for the campaign have been preserved at The National Archives in record series E 101. Significantly they have also been transcribed along with surviving Muster Rolls from the late 14th and 15th centuries and they are available to search online at www.medievalsoldier.org/search.php. 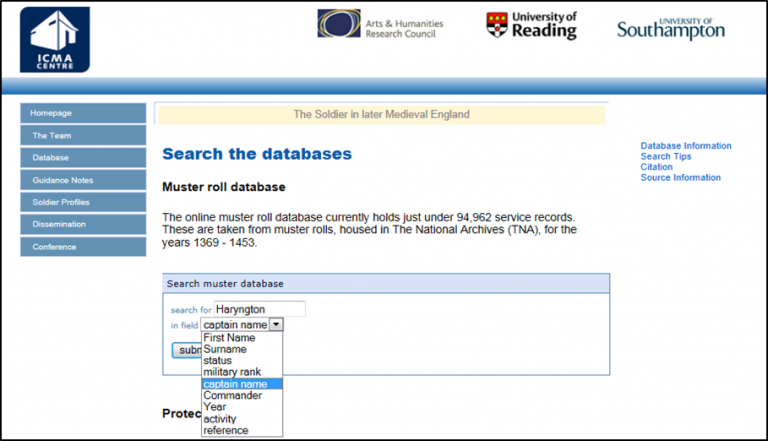 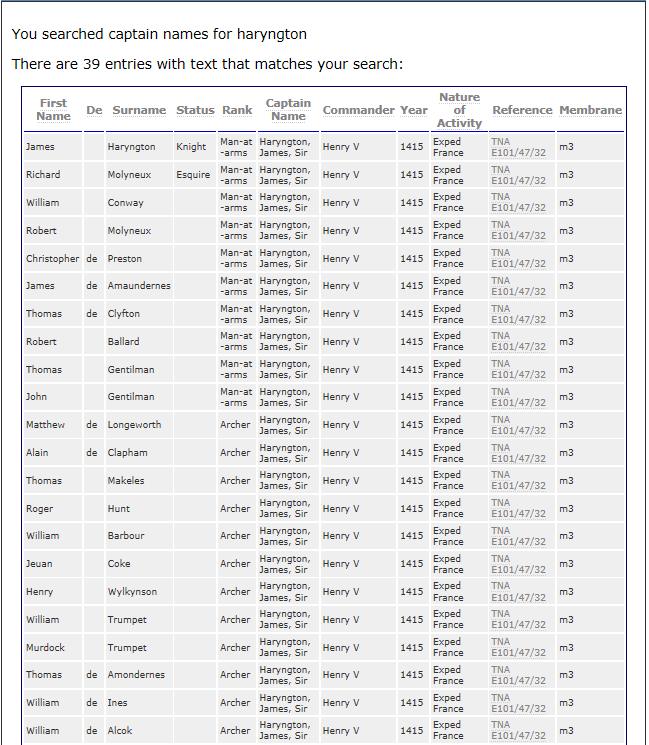 Sir James Haryngton is the first entry listed in the results above. The results of the search also reveal that Sir James fell just short of his obligations, recruiting nine men-at-arms (listed below his own name) instead of ten, but with a full complement of 30 archers. One unique feature of Sir James’ retinue roll which can only be seen in the original record is the written annotations revealing the fate of men in the retinue. 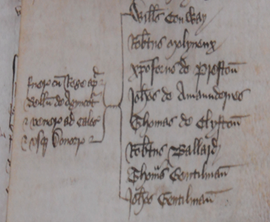 Following the sealing of the Indenture contracts, the Office of Privy Seal on the King’s behalf would authorise payments to be issued from his Office of Exchequer for wages of war to army captains for themselves and their retinues. These orders or warrants are found in series E 404. Warrants are a useful alternative source should an original indenture not survive because some of the information is also recorded in these records and they are written in both French and Latin.

The warrants for Issues for the campaign in 1415 have been indexed alphabetically and chronologically by name of individual captain in the published volume of the List and Index of Warrants for Issues 1399-1485. This volume is available to browse on the shelves in the second floor reading room at The National Archives.

Money when issued from the Exchequer for expenditure on the campaign was recorded on rolls in E 403 known as the Issue Rolls. An entry is found for Sir James Haryngton in E 101/45/5, which is a compilation of entries extracted from the Issue rolls exclusively for the army of 1415.

It reveals that he and his retinue were paid a total of £84 11 shillings for their first quarterly instalment of wages. In the margin it says that he had also received a payment of £55 19 shillings and 5 pence from the Exchequer of Receipt on 6 July [1415]. The text is written not in French but in Latin, which tends to be the rule rather than the exception in the Issue Rolls.

Men of specialised professions such as carpenters, masons, armourers, and even shoemakers also appear on the rolls. Although non-combatants, these men served in roles crucial to the functioning of the army of 1415 and their role and contribution is too often overlooked. John Clyff was paid £40 10 shillings along with 17 other minstrels for their musical talents would provide entertainment but also I’m sure would raise the morale within the army.

A list of armourers to be paid included Albric Mailmaker who perhaps gave himself this title to exchequer officials – or in the absence of a second name to differentiate him, the officials chose an appropriate one for him! He was paid along with 11 other named armourers six pence per day and the group paid a total of £27 6 shillings.

The army Henry successfully raised was approximately 12,000 strong and was one of the largest armies raised since the English siege of Calais in 1347. Despite being delayed in Southampton and along the southern coastal ports of England for just over a month the army finally embarked for the shores of France on 11 August, 1415. 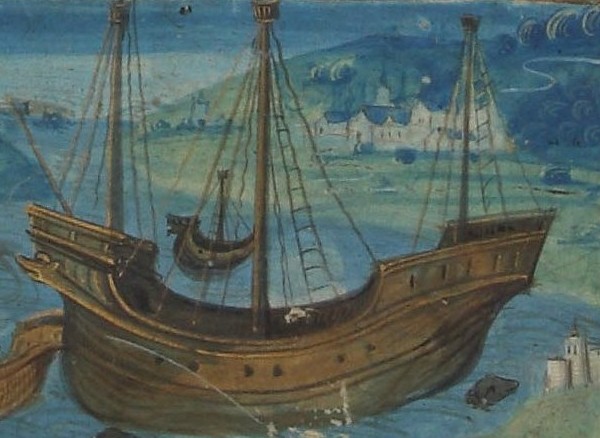 The fledgling army was finally ready for its baptism of fire but as men clambered on board ships with apprehension and hope of glory and riches they must have felt confidence in the cause and ability of their commander and King.