‘The lights went out and the bombs came down. But every man, woman and child in the country had no thought of quitting the struggle.’ These emotive words from Prime Minister Winston Churchill on VE Day 1945 praised the struggle of all those living and working on the home front during the Second World War. While carrying out research for our event, Illustrating victory, which commemorates the 70th anniversary of VE Day, we have discovered how documents here at The National Archives demonstrate the ways in which the British government strove to keep every man, woman and child from thoughts of quitting the war effort. 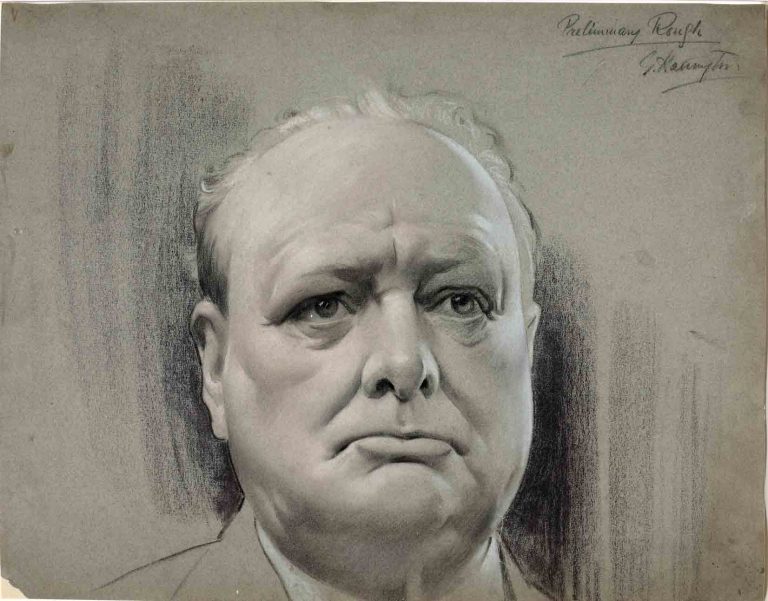 From radio to film to posters, the government fed constant streams of information and propaganda to the public, all designed to raise the spirits and encourage the public whose sons and daughters were daily giving their lives in war. Series INF 3 is made up of the original designs of ‘war artists’ employed by the government to produce propaganda images. These come in many forms including large scale posters, tiny postcards and illustrations for books and magazines. The different media the artists used to create these works and their messages can vary hugely. Many of these have been digitised and you can see them through the Art of war online exhibition and our Illustrating victory Flickr album.

The INF 3 series provides a unique opportunity to explore some of the art held here and to gain insights into the psychology of a nation at war. This blog post will give you a glimpse of how we can interpret these documents through three distinct and significant perspectives, revealing the diversity of the holdings at The National Archives and the power of propaganda – a power still tangible 70 years later.

The Ministry of Information

The Ministry of Information (MOI) was the central government department given the responsibility for publicity and propaganda. Established on 4 September 1939, the Ministry’s function was to manage the flow of news and information and to support national interests at home and abroad. The MOI’s headquarters were housed within the University of London’s Senate House where it would remain until the end of the war.

The building’s monolithic design later inspired George Orwell’s description of the Ministry of Truth in his novel Nineteen Eighty Four. One of the more interesting aspects of MOI’s output was the production of posters and art work for the British war effort. Artists and designers were often recalled from active services to work for the Ministry.

‘In 1942 MOI spent £270,000 on posters, art and exhibitions out of a publicity budget of £3.45 million’ (INF 1/74). For most of the war the Ministry was directed by Brendan Bracken, Winston Churchill’s friend and colleague, whose initials, BB, are the same as those of Orwell’s ‘Big Brother’.

They say history is written by the winners…… in history books, looking at the past from the clarity of the future. However, the images from INF 3 tell the story about the wartime British public as any book written since the war ended. 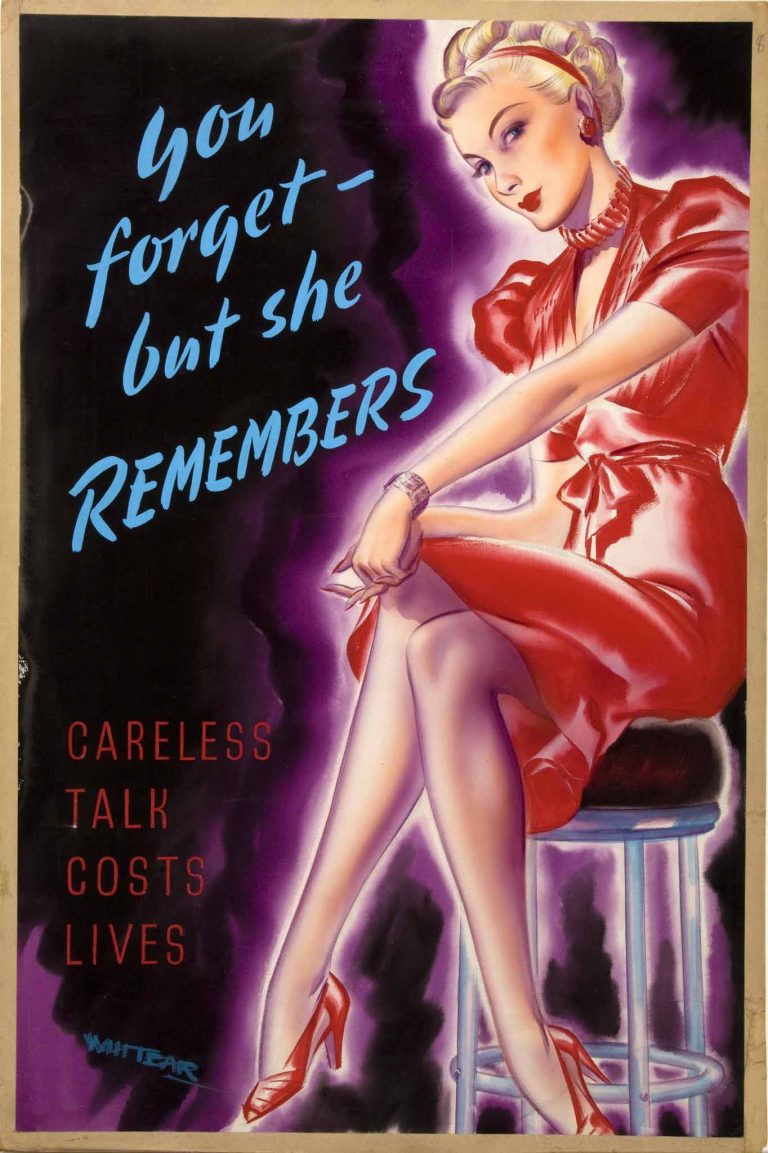 For example, this gloriously vibrant pastel and watercolour anti rumour poster design features ‘a bar siren’; an example of iconic 1940’s seductive womanhood. This quite obviously outlines the ideals and stereotypes of beauty for the era but also reveals the fact that the British government were genuinely concerned about female spies on home soil and were trying to hammer home the impact of indiscretion. We can see here the hints of the now infamous, shadowy sub culture of this conflict; one where spies and secrets, information and intelligence were the bullets and bombs between nations.

The clean lines, bright colours and catchy wording also seats this work within the creative style of this period. Comic books were growing in popularity, cartoons and animation begin to flourish, advertising and packaging become more distinctive and persuasive for the consumer. These distinctive cultural styles and developments are reflected in the style of this work, screaming to all who view it that it is a product of the 1940’s. This highlights the historical knowledge and connections you can make from a piece of art – informing your archival research as much as any written quote.

Between 2007 and 2010 our Collection Care department carried out a large scale conservation project which resulted in the treatment and re-housing of all 1861 original artworks in the INF 3 series. The original artworks found in the INF 3 class represent the diverse range of artists’ techniques and media used during the Second World War. This includes: oil on canvas; oil on board; pastels and watercolours; charcoal, lithographic chalk, graphite and pen drawings; scraperboard, collages and paste-ups. The initial project raised a number of questions around materials, media and techniques that were investigated further using technical analysis.

As a department Collection Care routinely investigates the materials and techniques used to produce a record, as the information gained though technical examination is essential in understanding the history of the object. By understanding the materials and techniques used by artists as well as the composition of the objects themselves we can inform the historical narrative in new ways.

In the case of the INF 3 works, the war artists consciously chose which painting and drawing materials to employ and then manipulated them to achieve a desired result. As the artworks were created for mass reproduction the artists and the studios for which many worked viewed them as ephemeral and were not concerned with the longevity of the chosen materials. Combinations of unsympathetic materials and a decrease in the availability of good quality media, paper and board caused an inherent instability within the collection.

A good example of media vulnerability can be seen in the INF 3 works by Terence Cuneo. In these works he frequently used a thick paint layer on top of powdery drawing media to create highlights in his monochromatic images. This combination of media is very unstable and subsequent handling and movement of the objects over time resulted in instability and loss to areas of paint. To stabilize damage of this nature conservators carried out localised consolidation treatments. Consolidation allows a conservator to re-adhere loose particles of paint using a controlled application of adhesive under magnification. Alongside this treatment conservators used polarised light microscopy to identify the pigments present on individual artworks. 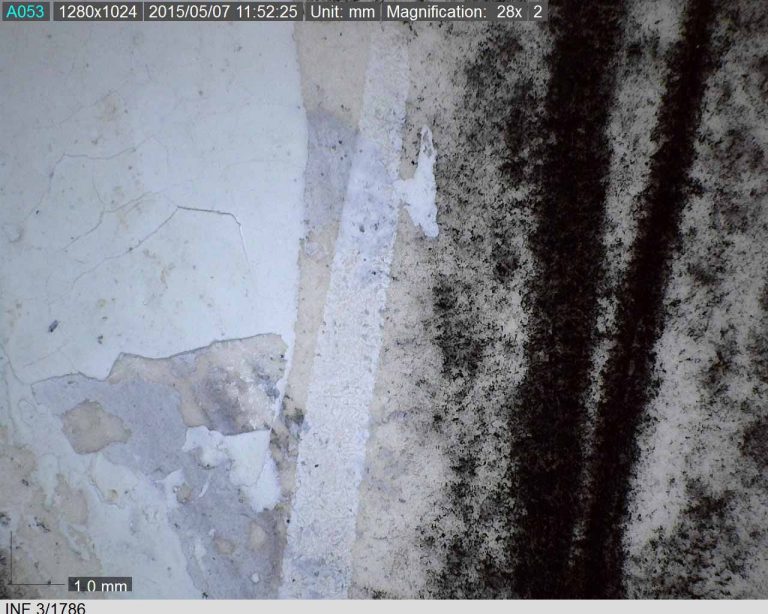 Further research looked into the material composition, history of manufacture and suitable conservation methods for treating damage to scraperboard. This material was used by a small number of artists in the INF 3 class to create images for publication. The stylistic effect of artwork created using this process is similar to that of a wood engraving yet it would have been more cost and time efficient to produce. The kaolin surface layer of this material is delicate and easily damaged if the artworks are not appropriately housed and handled. 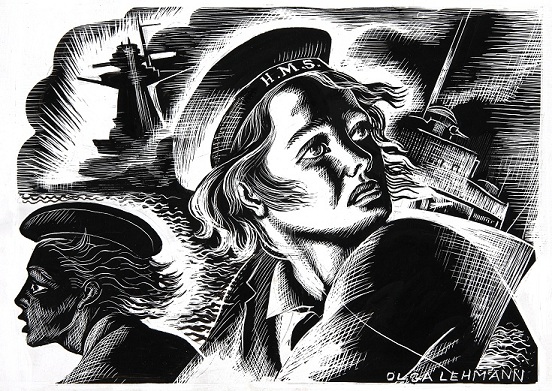 The project revealed a wealth of information about war artists’ working practices and use of materials that has been recorded to enhance our understanding of this collection and enrich our Discovery catalogue entries.

So, as surprising as it may be to find art in any form within the holdings of The National Archives, it does indeed exist and can reveal as much about the past as any written document. The event Illustrating victory brings a choice selection of INF 3 documents together, connecting them to supporting documents across the archive and revealing the interdisciplinary nature of the work at The National Archives.

The bombs may have fallen and the lights may have gone out but the artists kept on drawing. So, come and join The National Archives in commemorating VE Day and the people who helped to illustrate victory in the mind of the nation.