‘For Valour’: the Garhwalis and Neuve Chapelle

Joseph Joffre, commander in chief of the French forces on the Western Front in 1915, dismissed the initially effective but ultimately frustrated British action at the Battle of Neuve Chapelle as ‘a success that led to nothing’. The battle was the first deliberately planned British offensive of the war, and was initially successful, with British and Indian Corps troops capturing the village of Neuve Chapelle on the morning of 10 March, 1915. However, adverse conditions, pockets of German resistance, and a breakdown of communications between British units and their commanders, meant that this initial victory could not be capitalised upon, with the battle closing on 13 March with few strategic or territorial gains for the British. 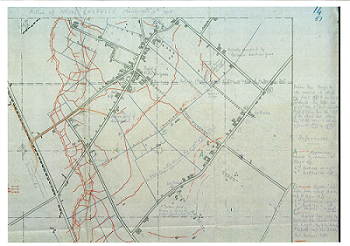 Trench map showing the British lines of advance at the battle of Neuve Chapelle, 10th March 1915. Catalogue reference: WO 153/127.

Neuve Chapelle marks an important milestone for part of our First World War commemoration campaign, the Twitter feed @UnitWarDiaries. From this account, we have been tweeting entries from the First World War unit war diaries held in the record series WO 95 in real time, 100 years on. The diaries contained in WO 95 provide a unique perspective on the daily lives of the troops involved in the war.

Since the project began last year, entries from the diaries of a variety of units from the British Expeditionary Force (BEF) have been tweeted. Since January, @UnitWarDiaries has shifted its focus away from BEF units and taken up tweeting entries from the war diaries of units in the Indian Corps’ 3rd (Lahore) and 7th (Meerut) Divisions, who first entered the Western Front in October 1914, and whose war diaries were made available to download from The National Archives’ website, and tagged on Operation War Diary, since January. @UnitWarDiaries is currently tweeting the diaries of five units: the 6th Jat Light Infantry, the 9th Bhopal Infantry, the 1/4th Ghurkha Rifles, the 112th Indian Field Ambulance, and the 39th Garhwal Rifles.

The latter’s second battalion, the 2/39th Garhwalis, played an important role in at Neuve Chapelle, and their actions were typical of the bravery shown by the Indian Corps. The units’ war diary entries of 10 March, as well as a narrative account of the battalion’s actions written up by their commanding officer (CO) a few days later, give a fascinating account of the assault, and the courage and discipline of its troops.

The Garhwalis at Neuve Chapelle

The success of the first day of the battle of Neuve Chapelle has been credited to its careful planning, the element of surprise the British had, and the accuracy of the preceding artillery bombardment. The 2/39th Garhwalis were essential to this surprise, their commanding officer having a shallow trench cut next to their ‘jumping off’ point on the Estaires – La Bassee road, to conceal them and protect them from artillery (WO 95/3945/3, p.113).

The attack was set to begin at 8.05am, the first two assaulting companies of the Garhwalis lying under their greatcoats in the newly cut trench. At 7.30am the preparatory artillery bombardment, designed to cut the German wire and weaken the defences of their advance trenches, started up. The 2/39th Garhwal Rifles’ diary describes this as a ‘terrific bombardment, every kind of gun being used’, making a ‘deafening’ noise. The bombardment is noted as being accurate; the German wire being ‘cut a good deal by the fire of the guns’, but it was not without mishap. (WO 95/3945/3, p 102). Stray British shells fell short, and the German guns also replied, one shell falling close to the Garhwalis’ commanding officer, as he, his adjutant, his orderly and a man of the 6th Jat Light Infantry sat up on the British parapet watching the bombardment. The CO notes that a German high explosive shell fell close to their seat, sadly killing the orderly and Jat solider, but the CO and adjutant were left unhurt, beyond a ‘covering of green and a mouthful of green sulphurous smoke’. (WO 95/3945/3 p.114) 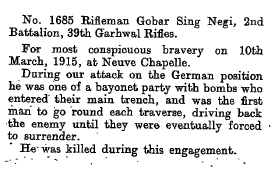 At 8.05am sharp the Garhwalis began their advance, the artillery lengthening their range so as to open up space for the men to move toward the German line. This combined with the concealment provided by the hastily cut trench next to their ‘take off’ point, allowed the German line, according to the Garhwalis’ CO to be ‘nearly reached before the enemy was fully aware of the fact and could open as hot a fire as he might have done’  (WO 95/3945/3 p.114). Reaching the main German line, the Garhwalis met at first with little resistance, which their commander credits to his troops ‘rising without hesitation” to advance’ (WO 95/3945/3 p.118). The unit’s war diary entry then recounts that ‘bombing and bayonet parties worked down the main [German] fire trench’ as well as communication trenches, reporting that ‘several casualties occurred here’ but that the ‘line pressed on and reached their objective’ (WO 95/3945/3 p.102).

One of these casualties was the greatest tribute to the valour and bravery of the Garhwali men that day. Rifleman Gabar Singh Negi (often erroneously referred to as Gobar Sing Negi in contemporary British sources) led one of the bayonet parties who bombed and charged their way through the main German trench that day. Showing bravery and leadership one would usually associate with an officer, he led his comrades in charge, the London Gazette recording that he ‘was the first man to round each [German] traverse, driving back the enemy until they were eventually forced to surrender’ (ZJ 1/621). Rifleman Singh Negi was sadly killed during this action, but his bravery allowed the Garhwalis to take 187 prisoners and three machine guns in their attack, the battalion quickly sending two companies forward to occupy the village of Neuve Chapelle and the Smith-Dorrien line beyond. Singh Negi was posthumously awarded the Victoria Cross for his actions – ‘For valour’ is the inscription that appears on the front of a Victoria Cross. Unfortunately few records of him survive in Britain, other than the Gazette entry for his medal and a brief mention in the April 1915 war diary of his battalion.

Despite their initial success, the Garhwalis advance ground to a halt as disorganisation left the British advance in disarray. Their war diary reports that they were ordered to advance out of reserve trenches in support of forward battalions at midnight the evening of 10 March, only to be ordered some time later to return to their recently vacated position, giving a glimpse of the disorganisation which prevented the British command from capitalising on their initial success.

However, the 2/39th Garhwal Rifles’ war diary for that day is a testament to the Garhwali men’s bravery. The unit’s diary credits the men as behaving ‘splendidly … always ready and anxious to advance’, and their commanding officer praises their ‘dash and determination’ in his subsequent report. 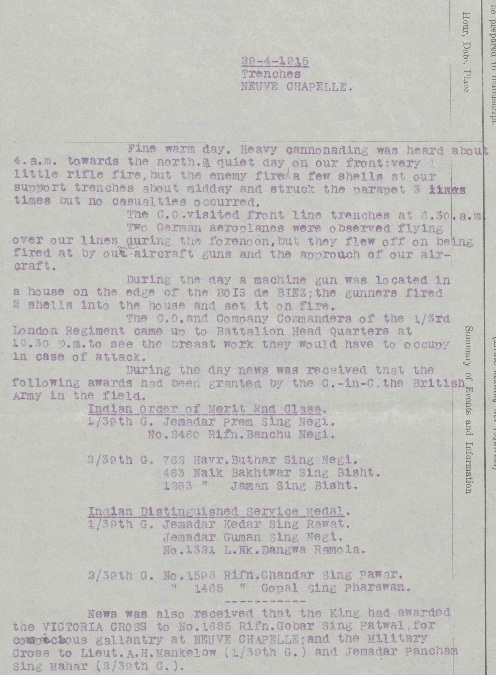 Entry from the 2/39th Garhwal Rifles war diary for 29th April 1815, detailing the names of those from the regiment who had received gallantry awards for their actions at Neuve Chapelle. Catalogue reference: WO 95/3945/3.

@UnitWarDiaries will be moving on from Indian Corps units in April, taking up instead with diaries from ANZAC units, but today and for the rest of March it will continue to showcase the valour of the men of the Indian Corps who served on the Western Front.