Unidentified Christmas lights and stars in the sky

Christmas is traditionally a time for travelling and visiting family and friends – and probably for dropping in on the neighbours to wish them well.

The National Archives holds Ministry of Defence (MOD) files concerning reports of Unidentified Flying Objects [UFOs] from the general public. These reports are mainly in the series DEFE 24 and DEFE 31 (redacted files are available to download from Discovery for a fee). They give the date, time, location and – more importantly – a description of what the witness saw. The sightings are from across the country, with the details of the person reporting the sighting redacted.

Of course, a few dark, cloudless evenings, a festive drink or two, and a dose of seasonal good cheer, may explain this selection of Christmas lights and star sightings… 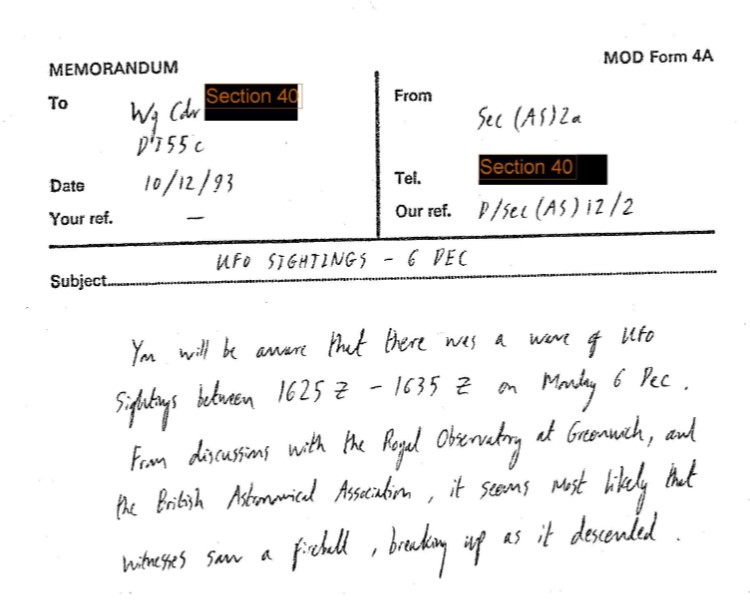 There were approximately 20 sightings of Unidentified Flying Objects – now referred to as unexplained aerial phenomena – across the South East; from Minster, Kent to Basildon and Luton. The sighting over Ashford (Kent) reports ‘like a shooting star, but not a shooting star’.

When the report came from Five Oak Green, near Tonbridge, Kent, the object was pencil-shaped, with three areas of lights. As the object moved over West Dulwich, it was a saucer-shaped white light, and very bright. In Luton the object was star-shaped, and in Basildon, four objects were seen.

During the evening, two reports – one from London and one from Surrey – concerned a very bright / large object with a burning tail / orange yellow triangle. Falling like a shooting star, the object was later confirmed as the re-entry of space or satellite debris.

From Brighton, the report was of a cylindrical object, with flowing light from the front, and flames from the rear. [DEFE 24/2035/1].

Over the years, Christmas Eve has brought out an array of reports of strange lights and objects. On Christmas Eve 2002, while stopping at a service station on the A418, a member of the public saw an orange object with lighter coloured tail (DEFE 24/2035/1).

Someone switched the Christmas lights on in 2008 – well, 15 lights, red and flickering were reported from Wycombe; from Rottingdean, Sussex, 15 bright lights were reported coming from the Downs (DEFE 24/2627/1).

In 2009, a letter reported an orange-red ball over Suffolk. In 1990, a star-sized bright, white object was seen over Cannock. Over Shepperton, two large round shapes – bright with red, white and blue lights – were reported (both DEFE 24/1940/1).

On Christmas Day, perhaps some people are contemplating the stars, and end up seeing various sights. In 2008 over Perth, Scotland, someone simply reported seeing a UFO (DEFE 24/2627/1), while over Coventry an orange light with a tail flame effect was reported. Glastonbury, famous for its annual music festival, saw two reports of very bright red lights (DEFE 31/172/1).

In 1983 there was a report of three single orange lights in the shape of a triangle over Groombridge (DEFE 31/173/1). In 1985, a pyramid shape with two bright headlights was reported over Newport (DEFE 24/1924/1). The report from 1995 over Otley, Yorkshire was of a round object, like a satellite dish, bright like a star, with white lights around the edge. In Loose, Kent, the object was larger than the moon, spherical elongated, and very bright (both DEFE 24/1974/1).

On Boxing Day, apparently people are still looking towards the stars. A report in 1996 from Blackheath mentioned three separate lights, formed at high speed, before separating. In 1990, a motorist reported bright orange and red lights at 01:45 on the M23, Junction 9 for Gatwick (DEFE 24/1930/1). The report of a cigar shape, with blue and green light at the rear, came from Hull in 1990 (DEFE 24/1940/1).

In 1991, Inverness, the sighting of a circular object, green-blue with white light, very bright, and the size of an aircraft was spotted (DEFE 24/1956/1). In 2008, someone in Yorkshire saw two parallel UFOs.

Unusually, the Christmas tree didn’t come came down on 4 January 1988 in Worcester, but was instead seen in the sky overhead (DEFE 24/1927/1)

We cannot leave another Christmas without mentioning the unique festive illuminations from 26 to 28 December 1980 in Rendlesham Forest, and the report from Lieutenant Colonel Charles Halt, United States Air Force. I will leave you to read the only record of those events for yourself… but allow me to reassure you that the Ministry of Defence states there is no threat to UK air space, nor is there any evidence to substantiate the existence of extra-terrestrial life – not even at Christmas. 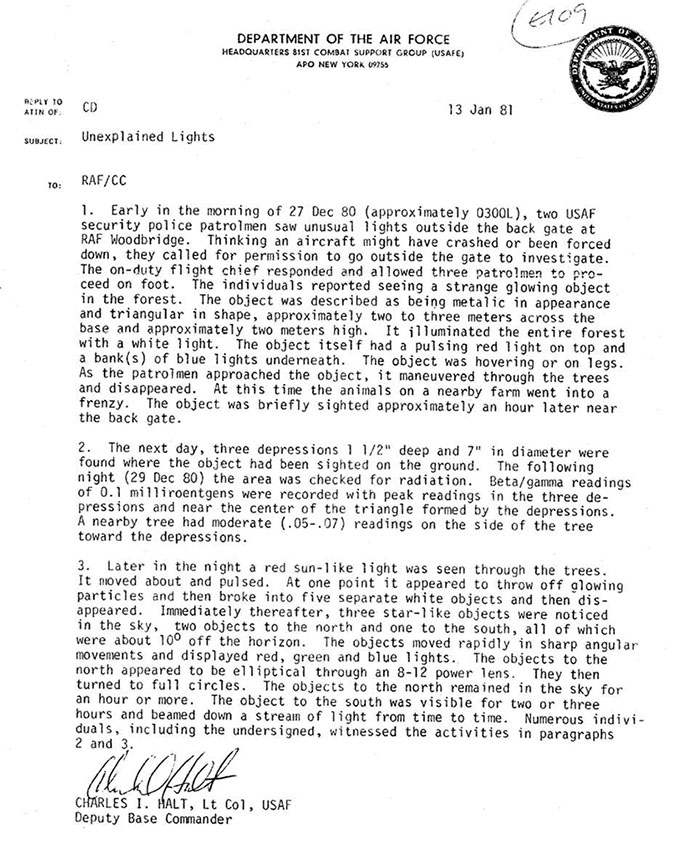