Home > Blog > My Tommy’s War: An unexpected war at home

My Tommy’s War: An unexpected war at home

My great-uncle had an unexpected war at home. My grandfather was too young to fight in the First World War and his father almost too old (my great-grandfather registered under Lord Derby’s scheme but was never called up). My grandfather’s older brother, known as Dick, was old enough to fight and was called up, but his war was to be very different from that which he might have expected.

Richard William Pearsall was born on 30 November 1899 in Nechells, an inner city district of Birmingham. He left elementary school at 13 and worked as a tool setter. Under the Military Service Act 1916 he was to be enlisted in HM Regular Forces on his 18th birthday, 30 November 1917. He was called up on 19 February 1918 and was passed as grade I at his medical examination in Birmingham on 18 January. He had a few minor conditions but nothing sufficient to cause rejection; the most serious being a slight inguinal hernia. However, he appears never to have been fully fit for frontline service. 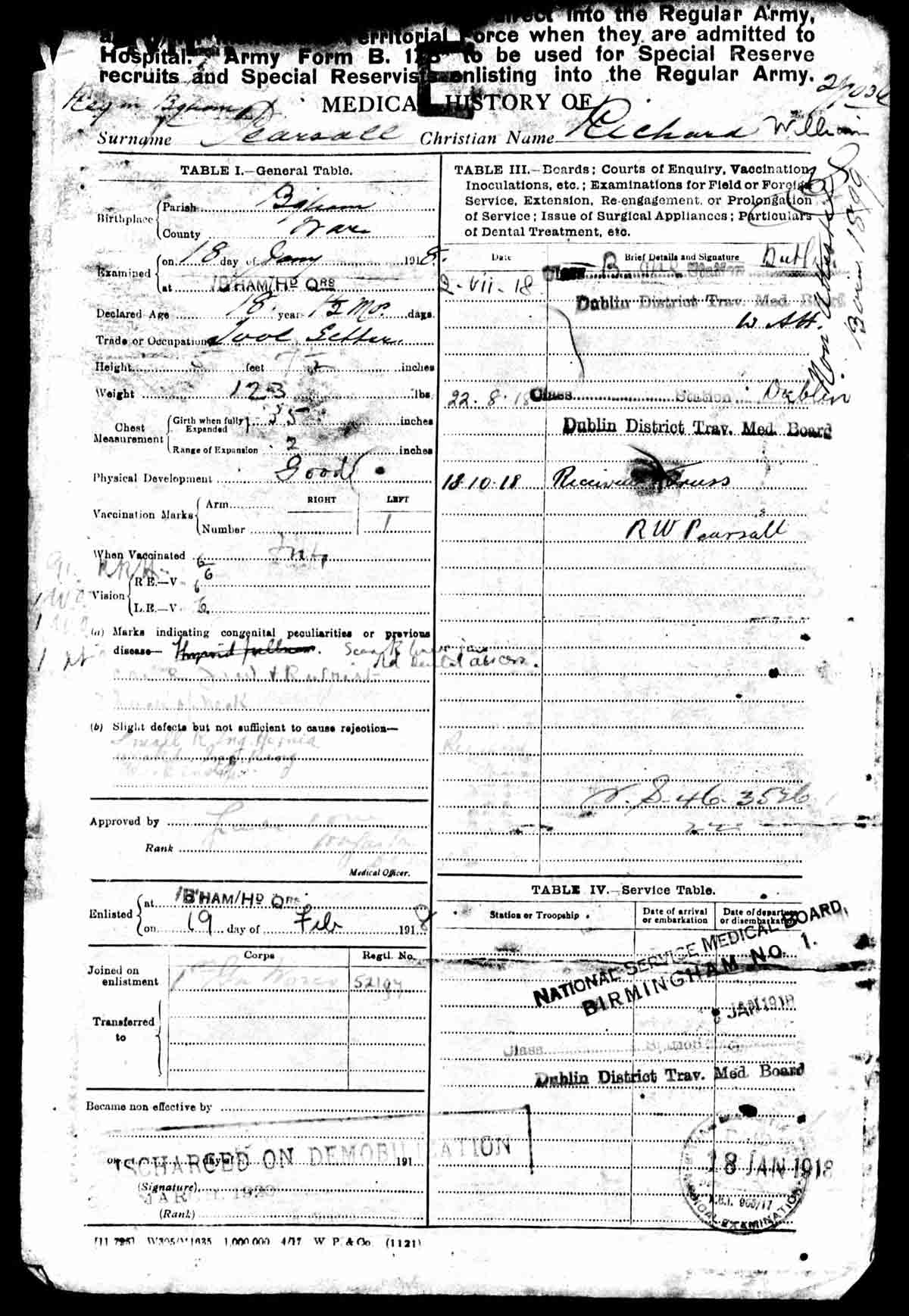 Private R W Pearsall no. 52197 was allocated to the 1st Garrison Battalion, the Worcestershire Regiment, which in early 1918 was stationed at Cosham, Portsmouth.   He was at the depot in Warwick at the end of February and joined the battalion in Portsmouth. What he felt about being allocated to a garrison battalion at home, rather than a training battalion, and then a service battalion in France is not known. He was only 18 at the time, so he was too young to go straight to France (19 was the minimum age to be sent overseas). This was changed in April 1918, when the minimum age was reduced to 18 years and six months if the recruit had had six months training. His medical defects must have decided his fate as he was only to see home service for the duration. At the end of the month, as his battalion moved to Dublin on 28 April. What he felt about this was never made clear, even if he confided his feelings to his brother at a later date: my grandfather only hinted many years later at some resentment on Dick’s part at his unit going to Ireland.

Portobello Barracks, Dublin (now Cathal Brugha Barracks) in the district of Rathmines was one of several barracks in and around Dublin and it was there that his battalion was stationed. The main problem from the soldiers’ perspective, particularly in the period of 1918 and 1919, was boredom and the tediousness of daily routine. Ireland was relatively peaceful throughout 1918 and drill and guard duty filled the days, but his health was still not good. He had medical examinations in Dublin on 2 July, 22 August and on 18 October when he was issued with a truss for his hernia.

A week later he was transferred from the garrison battalion to the 5th (Reserve) Battalion of the Worcestershire Regiment which was stationed in Harwich, Essex, as part of the Harwich garrison. He was at Harwich when the war against Germany ended. German submarines were surrendered at Harwich during the course of November and the crews were allowed to return to Germany. The submarines were moored in the river Stour in what became known as ‘U-boat avenue’. I don’t know if he spent Christmas and New Year in Harwich or whether he was allowed leave. His unit moved to Mistley, just outside Harwich on 25 January, and on that same day he was taken ill with the influenza and admitted to Dovercourt Military Hospital. The disease had a mild and a virulent form, and it is probable that he had the milder form. The flu epidemic of 1918-1919 was unusual in that it killed more healthy young men and women than children or the elderly. He was in the age group most likely to die from the illness as those with the strongest immune systems could provoke what is called a cytokine storm, or overreaction of the immune system, which weakened the body allowing the virus to overwhelm and kill them. Maybe the fact that his health had been poor actually saved him. He spent six days in hospital, there were no complications, and he recovered and was discharged on 31 January.

At the end of February the 5th battalion was moved up to Newcastle, where it remained for just over a month before being sent to Ireland on 12 April. The battalion was stationed in Portobello barracks, so Dick found himself back in Ireland for the second time. The situation in Ireland was getting worse, but hadn’t yet deteriorated into open violence. The troops were not patrolling the streets at this time and there was no curfew, but more British army units were arriving in Ireland.

The 2nd Battalion, Worcestershire Regiment arrived on 23 July 1919 and they were to be stationed at Portobello barracks for three long years. They absorbed half of the 5th battalion on 16 August; the other half was absorbed by the 4th battalion. My great-uncle became part of “C” Company of the 2nd battalion, but his period of service was almost over. He had a final medical examination in Dublin on 13 October and was demobilised, returning to England and No. 1 Dispersal Unit, Fovant. He had 28 days furlough from 29 October and his final discharge date was 25 November 1919. As his service was all at home (i.e. within the United Kingdom) he did not qualify for the war and victory medals. He had a quiet and undistinguished war.

His service record has survived, but the records of many of those who saw service in a theatre of war did not. Many men, however, only saw service at home including Ireland. The National Archives will be examining all aspects of the Home Front in 2016 as part of our First World War 100 programme.