It’s November 1943. The Allies are progressing through Italy, although inclement weather and German intransigence have been slowing the advance. The Russians have jubilantly re-taken Kiev, cornerstone of Kievan Rus’ and the old empire. British and American air raids have been causing damage to German cities such as Hanover, Kassel, and Leipzig. Prime Minister Churchill is calling regular early evening meetings of his War Cabinet and the Cabinet Secretary Sir Edward Bridges is on his iPad in the corner, tweeting proceedings to followers of the Cabinet. 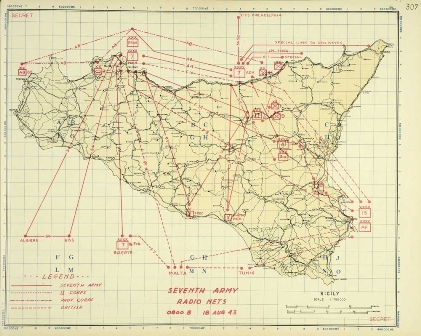 Ok, the situation in the Cabinet meeting room may not have been exactly like that but by reviving the @ukwarcabinet Twitter feed we are attempting to relate the Cabinet discussions in a similar way. By presenting the discussions of the War Cabinet as a series of tweets, 70 years to the day after those discussions took place, we hope to engage followers with the Cabinet’s decision making and present a narrative of the Second World War as seen through the eyes of those at the top of the British Government.

Set up in 2010 by Jo Pugh, the feed constitutes short summaries of memoranda or carefully selected direct or paraphrased quotes from minutes available via the Cabinet Papers website. The key to the feed is the fact that it is based on the documentary evidence in The National Archives’ holdings. It is this basis in primary source material that I find so intriguing. Each tweet contains a link to the document it quotes from, allowing interested readers to trace each story to the context of the memorandum it is lifted from or the Cabinet Secretary’s note of a meeting.

Which all makes my quip about the iPad slightly less spurious than it seems. We attempt, as much as possible, to match the language of the Cabinet Secretary in order to present the official record of the Cabinet in a very 21st century manner.

We revived the feed in October and now a group of contributors share publishing duties. While we will always attempt to keep a homogenous style and voice this will hopefully allow for a more broad selection of subject matter as contributors pursue their own points of interest. We of course will always look to cover the important military actions but as plans were beginning to be made for a post-war society an increased focus on social and economic issues may become apparent.

We, of course, are interested to hear how you are finding the feed – please feel free to comment below or send a message to the @ukwarcabinet account itself (contributors will reply to you from private accounts or by using the Direct Message function). Otherwise, we hope you enjoy the feed and that – as it does for us – it increases your understanding of the war and the documents which record it. Most of all, though, in this remembrance week, let those documents remind us of the incredible efforts and sacrifices made by ordinary people, as the turmoil of worldwide war raged on.

Outstanding – the ‘Outstanding event of the week’ was the capture of Kiev by the Russians (11 November).