It is sometimes said that truth is stranger than fiction, a maxim which undoubtedly applies to the extraordinary British naval expedition to Lake Tanganyika in 1915 during the First World War.

As part of a plan to seize control of the Lake from the German Navy, two gunboats were transported in an epic journey from Twickenham on the River Thames to Tanganyika in Africa. Documents and photographs at The National Archives reveal the trials and tribulations of the naval expedition, led by the wildly eccentric commander, Geoffrey Basil Spicer-Simson.

Setting off in June 1915, the two gunboats (named HMS Mimi and HMS Toutou) were transported by train and ship 6,100 miles from the Thames to Cape Town, and then nearly 2,000 miles by train via Elizabethville in the Belgian Congo. They were then hauled by traction engine and ox through the Belgian Congo and the rugged Mitumba Mountains to be launched on the tropical waters of Lake Tanganyika. 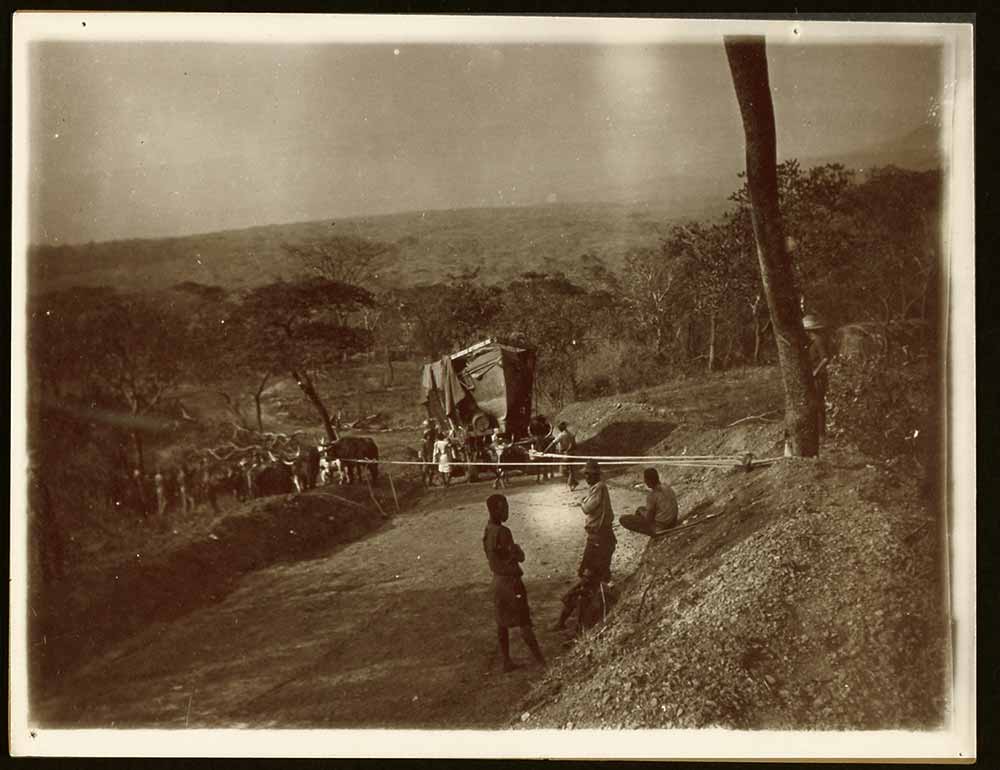 HMS Mimi being pulled up a plateau (catalogue reference: ADM 137/268)

‘was the record day of the trip, no less than 14.7 miles being covered and the foot of the Manika Plateau being reached. Unfortunately the motor lorry broke the coupling at the rear end of the torque shaft and split the shaft, through dropping through a bridge, about 150 yards from the place chosen for camp…’ 1

The last section of this huge trek was down river and narrow-gauge railroad from Bukuma to the port of Lukuga on the lake. Mimi and Toutou, together with Spicer-Simson’s entourage, which included pet chimp Josephine, arrived on 26 October 1915.

The origins of the expedition

In early 1915 John R Lee discovered that the German Navy was assembling a large steamer, the Graf von Goetzen, at the lake, to join two smaller gunboats, the Kingani and Hedwig von Wissman. This would enable German forces to dominate the 420 mile long lake and rapidly move troops to attack targets in the Belgian Congo and Northern Rhodesia.

Lee approached the Admiralty in April 1915, highlighting the German threat and arguing that a ‘general rising of natives north of Zambesi may take place…unless the natives be duly impressed with the power of the Empire.’ 2. He contended that if the Admiralty could get two fast motor launches onto the lake it would be enough to solve both problems.

The First Sea Lord, Admiral Sir Henry Jackson, was sufficiently impressed to underwrite Lee’s ambitious project. The shipbuilding firm Thornycroft on the River Thames was commissioned to build the gunboats, while Jackson appointed Geoffrey Spicer-Simson to command the mission.

A eccentric man on an epic mission

Spicer-Simson, an eccentric character, had not enjoyed a successful career to that date. He had suffered various mishaps, including the loss of a destroyer under his command in a collision. He was languishing in a desk job when he got the Admiralty’s call. The authorities turned down his suggestion to call the gunboats HMS Dog and HMS Cat, so he had them named HMS Mimi and HMS Toutou (French for bark and miaow) instead, before setting off on this epic journey.

The German commander on the Lake, Gustav Zimmer, was aware of rumours of Spicer-Simson’s expedition. He sent Lieutenant Rosenthal, captain of the Kingani, to investigate developments at Lukuga. Showing a great deal of courage and initiative, Rosenthal swam ashore where he discovered the British gunboats. Fortunately for Spicer-Simson, the Kingani left Rosenthal stranded, and he was captured by the Belgians before useful information could be passed to Zimmer.

In December 1915, after a frantic chase, Mimi and Toutou captured the German gunboat Kingani. They sank the Hedwig von Wiessman two months later: A high explosive shell ‘struck her in the engine room, and destroyed the engines and boiler and set fire to some oil’. 3 The presence of the gunboats greatly strengthened Britain’s position on the lake during the invasion of German East Africa in 1916. 4

This victory greatly increased Spicer-Simson’s prestige among Africans on the west coast of the lake and made it more difficult for Zimmer to obtain useful information. It also greatly buoyed his confidence, and he gave full rein to his eccentricity. He devised a skirt as part of his uniform and ceremoniously displayed his tattoos, acquired during his service in the Far East.

This proved the highpoint of Spicer-Simson’s career. Probably wisely, he avoided taking on the more formidable Graf von Goetzen, which was eventually scuttled by the Germans in July 1916, in the face of a Belgium advance.

Spicer-Simson was awarded the Distinguished Service Order and various Belgian awards for his efforts. John R Lee received little credit for devising and planning the expedition.

Discover more about the extraordinary story of eccentric First World War Commander Geoffrey Spicer-Simson at a free, creative event for families: The chimp who went to war.

Paice, E., Tip and Run The Untold Tragedy of the Great War in Africa (Phoenix, 2007)