Nobody else gives somebody else freedom

Freedom is something for which you fight and then you win

If someone gives you freedom as a gift, it’s not really freedom

Dr Walter Rodney was a British Guyanese political activist and historian who was assassinated in Guyana in 1980. In Britain, he is best known for his book How Europe underdeveloped Africa, but within the British Caribbean diaspora he is known for his activism to create a better space for the community in Britain and in the Caribbean. I first came across his work at the start of my ‘Transforming Archives’ traineeship at London Metropolitan Archives (LMA). As well as being the largest archival institution in London, housing some of the major collections related to the social, political and economic history of the city, LMA also holds the first major collection from the Africa Caribbean community in London covering over fifty years of history. LMA also actively engages with the diverse communities across London. 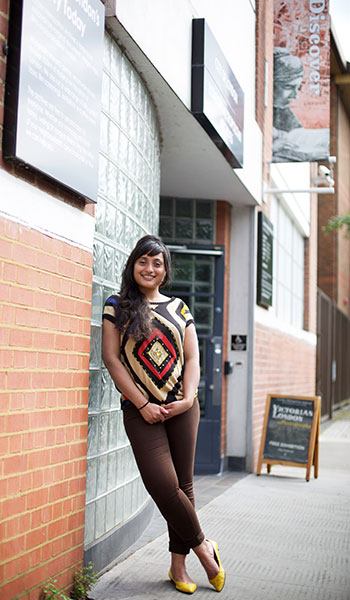 I work for the development team which is responsible for delivering education and outreach projects through various creative outlets. The traineeship so far has included a combination of independent work offering the opportunity to deliver my own projects – organising conferences, delivering workshops, seminars, including curating thematic displays; and also partnership work with other organisations. I would describe LMA as a trailblazer for highly imaginative and innovative projects. Due to the constant flow of creativity expressed through the multitude of events that are held every month, LMA has been a brilliant environment to gain a better insight into approaches to making archives more accessible to wider communities.

The quote at the beginning, by Walter Rodney, was taken from a documentary film, In the Sky’s wild noise, made in 1983 by Autonomedia and Victor Jara Collective to honour his political activism. This film is part of the Huntley collection at LMA which documents the incredible works of various activists and artists, providing an unparalleled view of the African Caribbean community in London.

I came across this film during the curatorial process for the LMA film club which I have been managing and delivering since February. Its aim is to raise the profile of the LMA film collections and provide access to films that aren’t easily accessible. The film club has also been a powerful tool in attracting new audiences due to the specific themes appealing to audiences with specialist interests. For instance, recently I presented a film at the ‘Brutalist Playground’ exhibition at the Royal Institute of British Architecture. The event was fully booked despite being a paid event.

The film club has also been a successful model for reaching out to the ‘non-traditional’ archive users. The Walter Rodney documentary which will be playing in the next film club has already attracted interest from new audiences, in particular from the African Caribbean community and young people involved in activism. On a personal level, managing the film club has been one of the highlights of my traineeship as it has offered me the opportunity to develop skills in curating digital archives and to become more confident in using it as a tool for community outreach.

The most exciting part of the traineeship has been the opportunity to design my own event which will be taking place in September. The aim of the History from Elsewhere Symposium is to provide a platform for academics and heritage practitioners to discuss the role of archives in recollection of minority memories. With a passion for promoting histories of minority and marginalised communities, this has been a fantastic opportunity to pursue my own interest whilst receiving full support and resources. I am also able to build on my existing experience in event management and apply skills such as writing project proposals, developing marketing and publicity strategies, and event planning within a heritage specific context. Through this project I have developed contact with organisations and practitioners specialising in minority heritage, many of whom will be attending the symposium. It will feature ten organisations specialising in topics including Disability and memories of buildings, Black Cultural Archives, Indian Soldiers in the First World War and POC LGBT heritage.

Another exciting role at LMA has been the opportunity to work in the No Colour Bar 1 exhibition which has been a massive learning curve. This was my first experience of working with a major exhibition. It is a collaborative project based on the Huntley archives which holds the personal collection of political activists Eric and Jessica Huntley.

The Huntleys’ set up one of the first bookshops promoting Black history and are the avant-garde of activism. They used arts and literature as the main avenue to drive new political discourses to tackle racism and social issues faced by the working classes from all backgrounds in post-war Britain. My main responsibility involved liaising with the partner organisations and various British Caribbean artists and academics to develop a publicity and networking database of over 500 British African Caribbean and Asian campaigners and activists from the last fifty years. I worked closely with the events management team and the volunteer team to recruit volunteers, manage the logistics for the private view event, and co-ordinate the private view invitation process and the guest list. I feel very proud to have also been given the responsibility to edit the captions for the artworks in the main installation at the exhibition.

The traineeship has been tremendously helpful in filling in the missing ingredient in my experience and LMA has been an incredible place to develop further knowledge as well as skills. The opportunity to work with a diverse range of collections has made LMA not only an ideal space to work with themes that enjoy a valued space within the nationalist narrative of British history but also with the memories from the minority and marginalised section of the British society that are yet to be given equal status within that narrative.